Thinking of starting a SPAC? I mean, all the cool kids are doing it.

Is the symbol "SARGE" taken? Perhaps we'll just go with "986"... half of Wall Street knows me, or knew me by badge number anyway.

What shall we focus our energy on? Aren't you coming? I'll look to merge with a start-up, probably on the edge of the electric vehicle business. Yeah... that's hot. Maybe cannabis. That's cool. How about we look for companies that paint album covers on the backs of denim jackets? Sarge, that's not cool anymore, and hasn't been for a while.

Hmm, I see what you mean. I'm going to have to name a CCO (Chief Coolness Officer). He or she will know what's cool, now and what will be cool next week.

We'll also need a celebrity. Then again, who's famous for more than 15 minutes anyway? There's some guy on my cereal box who I do not recognize. Let's get him, or we'll create one with a wacky one syllable name and claim them to be an "influencer."

OK, so we'll have to at least mention EVs. Use the initials, much cooler that way.

I know!! We'll accept crypto-currencies as investment, and then start our own. Sarge-coin! We'll claim to be peer to peer. Everybody loves peer to peer.

I just have two questions. Who knew high finance was so easy? And why the heck was I working so hard? Fundamental analysis is so 1980s. Revenue generation just means you're not focused. Dude.

Rise Up! Gather round

Rock this place to the ground

Burn it up, let's go for broke

Watch the night go up in smoke

Rock on! Rock on!

Did everyone read Jim Cramer's piece "Don't Get Lost in the Froth" on Real Money? Or at least watch Jim's monologue last night on Mad Money? I think you need to. Twice.

That last sentence. I have had these thoughts in the past. Often, a month or two later, I also think to myself, "Sarge, you knew better. Is it different this time?" To some degree, certainly. Equity valuations are well beyond anything considered normal. Well, historical context cannot be used as guidance. If the monetary environment is out on the fringe, if the fiscal environment is not only out on the fringe, but going much further real soon, if millions of individuals are unable to provide for themselves in a pandemic environment that also has millions well behind on either rental or mortgage payments, then why on earth would anyone use historical context for comparison of price determination.

That said, the S&P 500 has printed in red, although just by a smidge, for two consecutive days. The Nasdaq Composite and even the Russell 2000 both saw winning streaks come to an end on Wednesday. Losers beat winners at the Nasdaq Market Site, while aggregate trading volume for names listed at that exchange exploded higher. Not only that, advancing volume for Nasdaq-listed names crushed declining volume by more than two to one. Just how much of an impact do speculative types have on what used to be a quite useful metric? I mean, it's one thing when tech stocks or small-caps carry trading volume metrics over the goal line, but the Nasdaq Composite, Nasdaq 100, Russell 2000, and S&P 600 all had down days.

Even the day's sector performance tables look a little skewed. Energy finished out in front again. Easily, again. That's a WTI Crude story. It makes sense. Communications Services finished the day in second place. Thank Twitter's (TWTR) 13% move for that. Who knew that Twitter wouldn't miss former President Trump. I certainly did not see that one coming. Then come the REITs, Utilities, and Health Care rounding out the top five, or in a sloppy sort of way, the top three sectors without an obvious driver. At the bottom: Information Technology (even on semiconductor strength), the Industrials, and the Discretionaries.

Yes, increased deficit spending is still a future story. There could be/probably is some upside left in these markets. That said, I have turned my aircraft carriers into the wind. I am getting my reconnaissance aircraft up in the sky to see if they can spot enemy submarines. I have started shaving some of my less trusted winners on rallies, and I am not adding on dips right now unless they are DIPS.

Remember my short-sale rule, and this rule goes back for decades. I get cautious about shorting any stock once 8% of the entire float is held in short positions. I absolutely will not short any stock once that percentage hits 10%. This rule has worked for me since Reggie Jackson was the most feared slugger in baseball. Yes, I am that old.

My rule, though, saved me this week. Recall that I had written negatively on cannabis names earlier this week (Nice goin' Sarge). I wanted to short Tilray (TLRY) really badly. Instead I bought a few out-of-the-money puts that will expire tomorrow. I had already sold those puts by Wednesday afternoon. Lost some dough? Sold them before they were worthless, but sure. Now, imagine if I were short the equity. That would have been disastrous.

Oh, that reminds me. Totally unrelated, but interesting to traders: Tesla (TSLA) sold off more than 5% on Wednesday. It's up overnight, but you never know with this one. Tesla gave up the 21-day exponential moving average (EMA) on Wednesday, and if not retaken on Thursday could shake out some momentum traders. This would put a target on the 50-day simple moving average (SMA), currently at $743. Remember, if bitcoin has a bad day, not because it's material, but more because algorithmic traders (robots) will make the connection, so will Tesla.

The Bureau of Labor Statistics released their consumer-level inflation data for January on Wednesday morning. What traders need to understand is how this impacts policy, and those charged with policy implementation look at inflation in year-over-year terms, so don't pack the month-over-month numbers into your pretty little heads. Your brains need to streamline all available information in these times.

Two things stand out to me, as the January CPI printed at growth of 1.4% at both the headline and the core. One, these numbers were seen as "disappointing." Two, Treasury yields out on the longer end of the curve that had been pricing in both growth and increased inflation contracted. This put the squeeze on the two spreads (10Yr/3Mo, 10Yr/2Yr) that I cite most often.

That was a mistake. If only humans still traded these markets. The robots saw the disappointment and bought the long end. What the robots don't understand and don't care about because they are fast, fast, fast, is that disappointing consumer-level inflation emboldens those who worry about risks created by budgetary deficits. That almost ensures an ever-increasing supply of Treasury securities. Will there be a 50-year Treasury bond? Alex, I'll take Treasury bonds for 100 years. The slope of the curve may steepen, or may not, but I think it almost certainly gets longer. Burden your children with debt, you might feel bad. Burden generations you'll never meet? Hey, they'll understand.

On that note, we may want to remind ourselves that consumer prices crashed last March and April (2020). The algos are going to see significant year-over-year inflation for those two month in 2021, whether or not prices rise much from current levels. This, my wonderful friends, you need to be fully cognizant of. The robots may react like something is happening that may not be.

Oh, and Fed Chair Jerome Powell spoke yesterday. He promised to be the best friend that labor markets ever had for the rest of his natural life. Or until the economy achieves and sustains maximum employment. So, it'll be a while. We think.

The financial world will focus on dating app Bumble (BMBL), which will debut at the Nasdaq on Thursday. Fifty million shares (well above the already increased expected total) were priced at $43 (well above the already twice increased range) a piece. What do I think? Watch Blackstone (BX) , as that firm (majority owner) will control 82.5% of Bumble's voting rights after the fact. Dating in the pandemic age.

Long way from three hookers chasing you down 10th Avenue at 2 a.m. after hockey practice while their pimps try to get between you and your escape route. Ahh, New York City. The good old days. Guess those guys are out of business during a pandemic.

Speaking of IPOs, I think I'll wait for Rivian, the electric van maker backed by Amazon (AMZN) and Ford Motor (F) . Come to think of it, Rivian will be a major threat to Tesla going forward, especially with a built-in deal to sell fleets of delivery vehicles to Amazon. Yes, I think Tesla moves toward that 50-day SMA.

Yowza, the trigger has been pulled. Remember the potential breakout for Nvidia (NVDA) that I tried to point out earlier this week? The plan all came together on Wednesday. (Again, Jim Cramer is right, there needs to be a national plan to create a large foundry here on home turf. This is a matter of national security.) 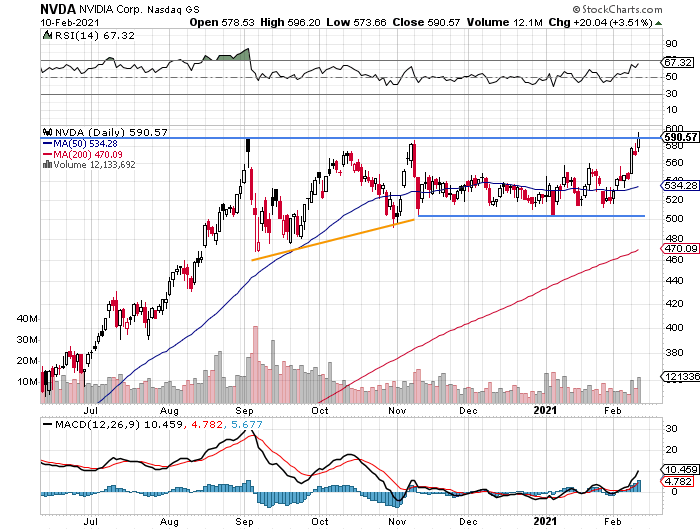 The chart should look familiar. Only difference is that now the last sale is above the $589 pivot, the daily Moving Average Convergence Divergence (MACD) is decisively bullish. Those are positives.

The Relative Strength Index (RSI) is closing in on the danger zone, but I do believe that portfolio managers may be forced to add on momentum should the name also open above pivot. Wonder Twins... I mean $670 target price... activate.

(Disney, Amazon, Ford and Nvidia are holdings in Jim Cramer's Action Alerts PLUS member club. Want to be alerted before Jim Cramer buys or sells these stocks? Learn more now.)