It was the kind of day that professional traders look for... as in what we look for a couple days after broad markets try to make a bottom. Higher prices on higher volume.

At the top of the chart? Hey, don't ask me. I just work here. After more than four decades of trading these markets, well more than three of those professionally, one thing I have learned has been to try to excel in the environment provided. Many have fallen trading what they thought it should be. I don't remember their names. Those that survive trade what is and what that environment implies, nothing more.

Sell-side analysts, academic economists and the majority of pundits you'll hear in the financial media all have two things in common. Something to sell and no personal skin in the game.

There was a moment where Dorothy's dog Toto got away from her, only to reveal the man behind the curtain. The great and powerful? All was not as it appeared.

The Dow Jones Industrial Average surrendered 79 points on Wednesday thanks to earnings-related weakness in Caterpillar Inc. (CAT) and Boeing Co. (BA) . Like the mighty Oz, the blue-chip index long ago saw its significance as a measure of equity market performance pass into yesteryear. Our two broadest measures of large-cap equity performance, the S&P 500, and the Nasdaq Composite, both managed to close a winning session at all-time highs.

Earnings have largely been better than expected. The European Central Bank (ECB) steps to the plate here on Thursday morning, which likely forces the Fed. The U.S. and China sound like they're trying to get a deal done (more on that below). That could all end up padding economic growth later in an environment bent on increasing valuation multiples. You dig?

My informal survey of just a few pals indicates that some folks may still be lighter the space than they wish they were. For the sake of diversity, I always maintain some exposure. I did not like Micron Technology Inc. (MU) at the bottom of the chart, however, and neither did the crowd. "Ketchup's a beach." Dudes.

Among semiconductor names, I maintain longs in Advanced Micro Devices Inc. (AMD) , Intel Corp. (INTC) (even though I keep threatening to sell it), Nvidia Corp. (NVDA) and Western Digital Corp. (WDC) ; the latter is new, because I am ticked that I missed Micron this time around. Oh, and as many of you know, Seagate Technology (STX) has long been a holding of my dividend book.

Among the semiconductor equipment suppliers, Lam Research Corp. (LRCX) , Applied Materials Inc. (AMAT) and KLA Corp, (KLAC) have all run like the wind. I told you earlier this week that among the three I like LRCX the best. I am short some puts in that name, so I am benefiting, but not to the degree that a successful equity position might allow. So, I thought to myself, "Self, how do I up my game in the semi equipment space, but a little under the radar, and how do I help my people by showing them?" Then I remembered.... I remembered Brooks Automation Inc. (BRKS) , the one everyone forgets. I have had moderate success in this name in the past.

OK, the shares are a little expensive at 27x next 12-month earnings. The rest of the group trades in the middle teens. If that bothers you, then take a powder. No sweat. I'm here to make a few clams, so I'm going to play this one into earnings, after I tell you how.

Brooks reports on Aug. 1. That's a week from today for the chronologically challenged. Both the firm's profitability and revenue generation have remained stable, so you'll notice that earnings-per-share growth has stalled.

Want to invest? So do the funds. About 62% of Brooks shares are owned by funds. At least 30 funds exited this name between the end of the first quarter and the end of second quarter.

BTW, all four of these names saw reduced fund participation through that quarter. There are a few portfolio managers catching some heat, which is one reason why the group has been hot. 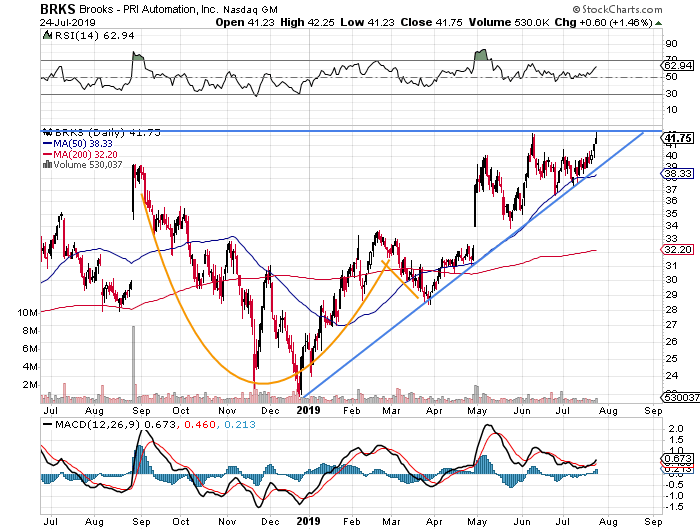 I have written on Brooks in the past. I redrew the (orange) cup-with-handle pattern that provoked the last move higher this past spring. That's just for thought-process development at this point. What I really want you to see, and what has me excited right now, is the (Blue) Ascending Triangle. Crikey! What a beauty!

We have an uptrend in place, and we have a closing triangle supported by the 50-day simple moving average (SMA). Explosive move here? I think likely. To the upside? Tougher question.

For Those About to Rock

On Tuesday, two Russian Tu-95MS strategic bombers and two Chinese Xian H-6 strategic bombers carried out a scheduled joint patrol over "neutral" waters in the Sea of Japan and the East China Sea. Apparently, at some point this joint patrol, capable of nuclear weapon delivery in the opinion of the South Korean military, breached air space over the Dokdo Islands. Those islands are part of a dispute between South Korea and Japan.

In response, the South Korean Air Force scrambled F-15 Eagle (Boeing (BA) ) and F-16 Falcon (Lockheed Martin (LMT) ) fighter aircraft to meet the threat. The South Korean fighters were forced to fire warning shots in order to drive the Russian and Chinese bombers away from the area. The patrol was explained away as part of a planned framework of cooperation and not targeted at any third nation. The message was clear, however. Both South Korea and Japan are U.S. allies, and those islands are a point of disagreement between them. It doesn't take a genius.

It also did not take long for the U.S. Navy to return the message. On Wednesday, the USS Antietam, a guided missile cruiser, sailed through the Taiwan Strait. Let's not forget that Congress recently cleared the way for Taiwan to purchase a rough $2 billion in arms, as the Trump administration has regularly demonstrated support for the autonomous government in Taiwan to be able to defend itself, while the U.S. and China on another level still try to iron out differences over trade. One more reason why I am never flat aerospace and defense. Rock on.

After the bell you'll hear from a number of interesting names. Amazon.com Inc. (AMZN) , Alphabet Inc. (GOOGL) , Starbucks Corp. (SBUX) and the aforementioned Intel among them.

For me, easily the most interesting among the group is Amazon. One week after Prime Day. One day after the Department of Justice (DOJ) announced a new, broad antitrust investigation into Big Tech. Wall Street looks for EPS of $5.57 on revenue of $62.48 billion. Those numbers would translate into earnings growth of 9.8% on revenue growth of 18.1%. Whispers appear to be to the upside on both lines.

While Amazon runs a number of wildly successful businesses such as online stores, third-party selling, advertising and physical stores, the focus tonight will be twofold. First, Amazon Web Services. The cloud computing business has been ripping the cover off the ball in recent quarters for impressive margin. Does the face-ripping performance of Microsoft Corp.'s (MSFT) competitor, Azure, mean the same for AWS, or will we see a withering battle for market share? The two are fighting over the Department of Defense JEDI program, a potential $10 billion ticket. (Amazon and Microsoft both are holdings of Jim Cramer's Action Alerts PLUS charitable trust.)

After the numbers, on the call, the DOJ investigation will need to be mentioned and discussed. Does that wiggle the share price after the knee-jerk? Probably would be my guess. I expect to day-trade the name from the options side here on Thursday, but likely go into the digits flat. That does not mean I am not a fan.

See the break above pivot in the $1,965 area? That rally has failed for a number of reasons, yet Amazon remains above that spot. My gut is that to garner momentum once again, these shares need to take that $2,050 high from 11 months ago and hold it. Then $2,400 is a possibility, at least technically. The DOJ investigation could obviously cap that potential.

Like I said, I think I play around in the options space today. Is there any way I take down some equity ahead of the numbers? Only if they sell the name hard into the close.

The Fed Is More Hawkish Than the Market Anticipated

For the third time this week, buyers stepped up on extreme computer-generated selling.

When the Market Roadblocks a Good Stock, Start a Convoy

Here's what you should do if a stock beats, but goes down anyway, using Knight-Swift Transportation and Heartland Express as an example.