Ever walk a big dog that's not your own? It does not take long to find out if this dog is accustomed to forcing its will upon its owner. It quickly becomes obvious that external forces are having a greater degree of impact on U.S. financial markets than the simplistic laws of demand and supply would suggest. Wednesday. The day that saw the Nasdaq Composite fall 1.7% and the U.S. 10-year note yield less than 1.6% in the morning, only to then witness both revert sharply to mean over the course of an afternoon.

So what gives? Recession fears? Chinese currency probes? Yes and yes. Much of the planet does now fear a contraction in global growth. It's not just the suddenly aggressive easing of monetary policy across Oceania/Asia (India, New Zealand, Thailand) prior to the opening bell on Wednesday in New York, it's also intentionally aggressive dovish signalling on behalf of the European Central Bank and the Bank of Japan.

We all watch the German 10-year bund. As I write this Thursday morning note, long before the lights start turning on in NY, German 10-year paper "gives up" -0.56%. In theory, that means that foreign demand for the U.S. 10-year would show up around 1.77%ish. The spread can be volatile, but how often does it stray very far above 240 basis points or very far below 230? Not for very long anyway.

My unproven theory is that should German yields collapse further (Wednesday's German yields were the lowest "or most negative" in 13 years) -- forcing an extreme level of demand into safe-haven quality sovereign debt -- this spread will diminish past what we consider the lower bound of the normal range.

Think it will all be okay? It might be. Heck, I was wrong about inflation in the early days of quantitative easing, but the German 30-year yields -0.08%. Think about that. How old will you be in 30 years. Holders of German paper over that timeframe are willing to guarantee a nominal loss, just to also guarantee what they must feel will be an actual return in real terms.

So, Europe Caused This Volatility?

No. Europe is reacting to its own anemic rate of economic growth that is itself at least partially collateral damage in the trade conflict between the U.S. and China. White House economic adviser Larry Kudlow told the media that the U.S. trade team was still planning to receive their Chinese counterparts for negotiation in September. Wednesday's markets reverted to mean upon comments made by China's former Vice-Minister of Commerce Wei Jianguo, published in the South China Morning Post, stating that the September face-to-face meetings were likely to go ahead as planned.

As unlikely as it is that either side will make concessions necessary to agree to a significant deal ahead of the Chinese Communist party's 70th anniversary celebration in October, or as the U.S. electoral season heats up, this lit a flare of hope. Hope for global growth, which is all the algos needed.

The danger here, and it is a danger, is that through stepping away from currency markets on Monday, the PBOC caused a severe selloff in U.S. equities. Through re-entry into that market on Tuesday, the PBOC stabilized U.S. equities. Through signalling a willingness to negotiate in person in Washington in September, a former Vice-Minister of Commerce stopped a sharp equity selloff in its tracks.

In each and every case, not only did Chinese forces demonstrate the ability to control pricing for the S&P 500 and the Nasdaq Composite, but also an ability to force money flow into the longer end of the U.S. Treasury yield curve, where Chinese accounts have a large vested interest. In the world of high-level negotiation, this is known as creating leverage.

Chinese economic growth slows down. The Chinese are out of weapons in the trade war -- or so we think. It cannot be lost on the U.S. side what the Chinese side has demonstrated this week. They are stating plainly that they can hurt the U.S. financially... or not. This morning, the PBOC supported the yuan at greater than 7 to 1. U.S. equity index futures greeted this news as if something splendid had just happened. Three days ago 7 to 1 was awful. They no longer have to hit you with a rolled up newspaper. You've been conditioned. Congratulations.

For those still focusing upon the Dow Jones Industrial Average, the blue-chip index pierced it's own 200-day simple moving average and then reversed for the second time this week on Wednesday. The far more highly focused-upon S&P 500 and Nasdaq Composite have not yet come close to testing their respective 200-day lines. What should be noted is that trading volume for both continued to go on at elevated levels, and both should open closer to their 50-day SMAs than their 200. For the S&P 500, retaking the 2930 level is key -- still far enough away, but in this environment, we rule out nothing. The similar line in the sand for the Nasdaq Composite would be 7982.

As for sector movement, yes materials have been hot. Some of that is misleading. Of course the miners have enjoyed something of a renaissance as gold and silver have gone ballistic. Wednesday saw strength in materials beyond safe-haven type metals. Chemicals and packaging stocks warmed up as well. That's a bet on growth. Except glancing over at the transports, we see that while the airlines were okay, the truckers and the rails had a not-so-great session. Materials go nowhere without transportation. (Again, see what I did there?) If investors start to really bet on growth, you'll see it there first. It's called Dow Theory for a reason.

Personal Consumption Expenditures. The savior of the first release for Q2 GDP. Retail Sales have shown moderate growth as Spring turned into Summer. For June, Retail Sales, as released by the Census Bureau, showed 0.4% m/m growth, beating expectations. Then again, those numbers are seasonally adjusted.

Back out of the seasonal adjustment and U.S. consumers spent $519.4 billion across the space in June, down from $547.3 billion in May, and up just 0.18% from the $510 billion spent in June of 2018. Why look at this data now, as the Census Bureau preps the July release for next week? I'll tell you why.

The Federal Reserve released its June report for the monthly change in Consumer Credit last night. The final score? Up $14.6 billion... and $14.7 billion of the total came from non-revolving debt, in other words student loans, auto loans and the like. Revolving credit, also largely known as credit card usage contributed -$80.5 million to the total. That's right, credit card usage in this country fell in June.

Understand that in May, this number exploded to the upside. Still, in a nation this size where job creation has remained strong and unemployment low, it is not the most common thing in the world to see the consumer not only borrow less in order to spend, but to actually pay down some of that debt in aggregate. On a personal level, I applaud the U.S. consumer for this behavior. I just hope he, she, they, are not simply exhausted. Food for thought.

Just how interesting was the Wednesday beat-down taken by Israeli network software security provider CyberArk Software (CYBR) ? I think every trader had wanted to grab this one on the way up. Was anyone brave enough on Wednesday as the shares gave up almost 9% after a pre-opening earnings release? EPS beat handily. Revenue experienced a 28.9% annual increase, also beating. Both the Licensing segment and the Maintenance & Professional Services segment best consensus individually.

Heck, the firm raised full-year guidance, putting the low end of the firm's range above the high end of previous guidance as well as above industry consensus. So, what's the beef here? For one, the quarterly guidance was pedestrian relative to the full-year guidance. Two... the firm is losing a key player. Chief Revenue Officer Ron Zoran is leaving the firm after 20 years. Obviously for a firm that has not seen year-over-year revenue growth of less than 25% for any quarter since Q3 2017, this is not good news. Or at least not perceived that way by public investors. 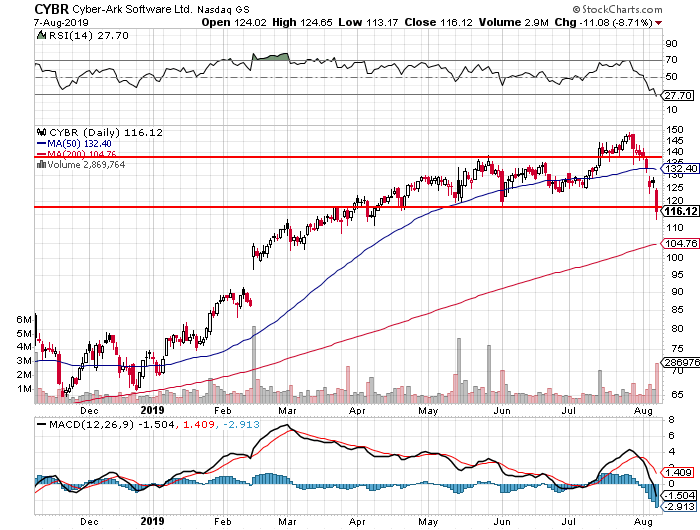 My thought is that Wednesday's close below the $119 level that had provided support for a four-month basing pattern is possibly significant. I can certainly see the willingness for a trader to play a limited bounce. However, for a serious investor, I think I want to see a take and hold of $119 prior to committing new capital in this environment.

Cyber security is not going away -- and in my opinion, this is a good firm, capable of sustaining consistent earnings growth. I think for that investor, this might be a good time to either allow Jim Cramer's "three day rule" to play out, or enter using the time-tested, Sarge-approved incremental method for entry.

Get an email alert each time I write an article for Real Money. Click the "+Follow" next to my byline to this article.
TAGS: Earnings | Economic Data | Economy | Investing | Markets | Politics | Stocks | Trading | World | Cybersecurity | Software & Services | Global Equity | Newsletter