Where to start in the SOS Ltd (SOS) saga?

Honestly, I have no idea.

For some of you, this is going to be a TL:DR piece (too long, didn't read), but thus far I haven't seen anyone try to compile all the pieces around last week's pummeling.

There's so much to this story to consider after a coordinated short attack. Between the Hindenburg "Report" (a series of tweets), some firm called Culper Research (who seems to have a mediocre track record), and multiple YouTube videos, investors have a lot to consider.

This weekend I dug deeper into SOS with the goal of analyzing the strength of the short arguments versus the counter arguments of the longs.

The company's pivot and subsequent actions are at the heart of the controversy. 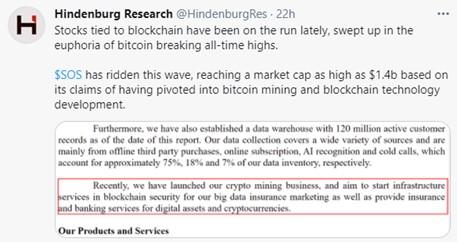 Let's go through cases for the bears and bulls one by one.

BEARS: It's not where it says it is on the SEC filing. 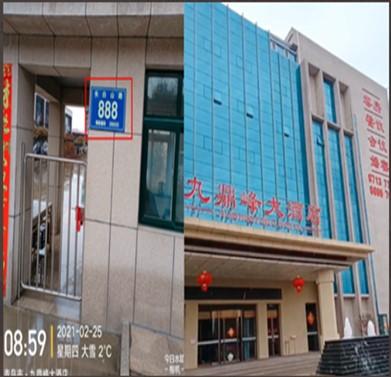 BULLS: First, I want to know who this woman is at the hotel. General manager? Night auditor? Front desk clerk? I almost choked on my drink I laughed so hard at that hard hitting, deep-dive research.

Second, this picture has already been shown as misleading.

Third, you aren't looking in the correct places. 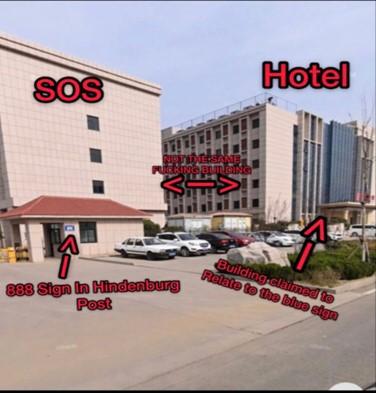 But as the weekend progressed, different pictures and theories have emerged. Unfortunately, a conclusive bull or bear victory isn't obvious. The only obvious takeaway is the initial picture was two different pictures cropped to look like the same building. That's a bad look for Hindenburg.

At this point, it feels as though Hindenburg rushed out their "research." Who can blame them? They saw an opportunity to easily hit a stock. It's a Chinese company, so the market already doubts it. It's a shell transitioning to a hot industry, which is another strike, and as we'll see, shorts only have to create some doubt rather than prove anything. Plus, they released their report on a Friday afternoon, knowing a Chinese company is done for the day. It provided all afternoon to hammer the stock and fill investors with doubt.

I should note Hindenburg followed up with something to the effect of ignoring this error and saying these buildings don't matter anyhow, it's a picture of another building that matters.

I dug around, having to rely on a Chinese to English translation and found many businesses registered to this same address, so many that they all can't operate there. That likely means that this area acts almost like a registered agent in the U.S. It's an area where I need to dig more, but it adds another layer of doubt to Hindenburg's headquarters conclusion.

If I'm a bull, I'm focused on this portion of the bear thesis initially. It shows that it is potentially flawed from the start.

BEARS: It's not a real company. And before I get into the tweets, the bears strongest case lies with FXK. 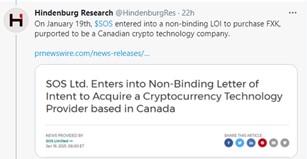 FXK clearly rips off RHY's site. Does that mean it is fraud? Not conclusively, but it probably does mean the site was rushed to creation or the folks are just plain lazy who created it. Either way, it's a terrible look. One that makes bulls uncomfortable and scores points for the bears.

In terms of sites using the same theme; again, it's bad optics. Then again, if it's a common theme, the argument loses its luster, but still creates discomfort. Another strike for SOS.

On the surface, another strike; although this one may not be 100% accurate as you'll see in the bull case.

BEARS: It was just made and copies another site (as mentioned previously). 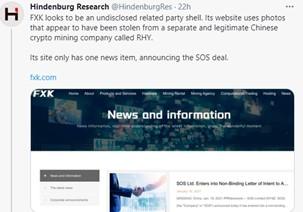 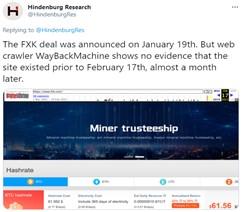 Again, this is a concern worth noting.

BULLS: The WayBackMachine is not without faults and the sites may be the same because of the letter of intent.

Source: https://archive.org/about/terms.php -those are words direct from WayBackMachine

There are more questions than answers here, more concerns than clarity. Unless SOS announces they are walking away from the LOI to buy FXK, there are a lot of questions that need to be answered to address the areas brought forth by bears.

BEARS: Another SOS shell that doesn't exist. We checked the address for the China office and found nothing. Also, the website has the same IP as SOS. 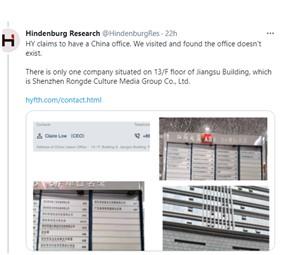 BULLS: Why wouldn't you visit the NYC office?

This one should have been easy. I believe they opted for the China check because it fits better with the "China is bad" and "China is fraud" narrative. It doesn't make them wrong, but this still leaves it as an unanswered question. It comes more across as framing, like the other building pictures, rather than conclusive proof.

If I were bullish, I'd want to see more proof of HY; however, it's not unheard of for crypto mining resellers not to have much in the way of a web presence.

BULLS: The possible smoking gun to prove FXK Tech exists and so does the relationship between SOS and FXK. 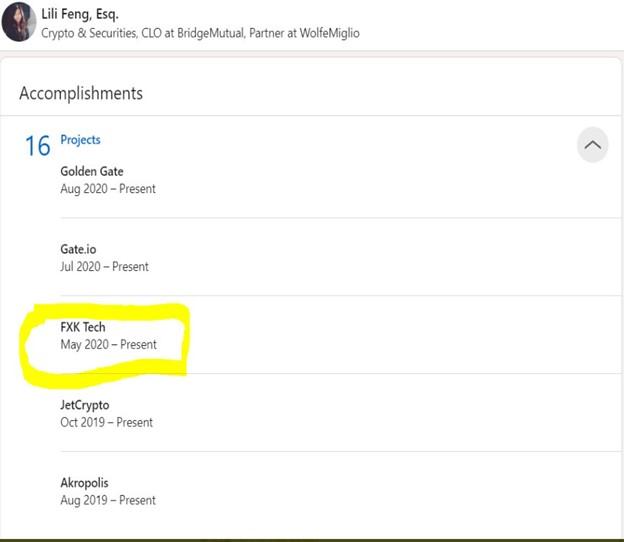 Digging on LinkedIn, you can come across Lili Feng, who not only boasts an impressive resume, but who also lists FXK Tech as a project she's been involved with since May 2020 through the present. Note her focus/specialty: Crypto & Securities. And she's a lawyer, so this ties in well with FXK Tech setting up shop. Beginning work with an attorney in May to create and begin a company in July actually fits well.

Bears will note the May date ties in well with the closing of the SOS reverse merger.

Now, what about Bridge Mutual and Wolfe Miglio? What do those companies do?

You can check out Bridge Mutual at www.bridgemutual.io

You can also check out www.wolfemiglio.com, another possible link. 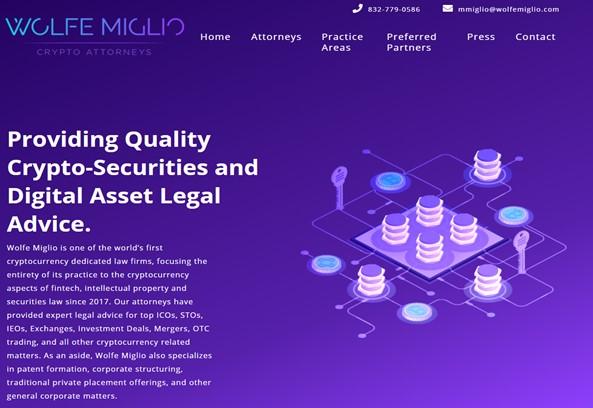 If shorts really wanted to bury SOS, they should have not only found this, but reached out to these companies. The same could be said about bulls wanting to disprove bears.

Because it provides a logical tie between FXK and SOS.

Because (deep breath), Bridge Mutual works with SOS on a blockchain technology for life insurance solutions and has been doing so for several months.

You can read it for yourself:
https://bridgemutual.medium.com/bridge-mutual-to-disrupt-decentralized-insurance-market-472569774f2a

On the Investors and Partners slide, you'll find SOS listed.

This doesn't definitively tell us FXK Tech is legitimate, but this does show us the due diligence of every short report we've read or watched on YouTube fell short of being complete.

How did shorts miss this? I don't know. It feels like a big miss. And it introduces a thesis that could derail the entire bearish argument.

Could it be Bridge Mutual introduced FXK Tech to SOS? There's a clear link established. This may actually be clearer than anything Hindenburg presented in their series of tweets. In fact, it has more plausibility than any bearish/short I read.

This doesn't make SOS a buy or the bull theory correct, but it adds another layer of doubt to the short thesis. If I were buying into the short thesis, I would be disappointed this connection hadn't already been addressed and dismissed.

Hindenburg concludes with this.

Given that SOS has raised nearly $350 million since Feb. 9, an issue mostly ignored in any bear thesis, and boasts a market cap around $650 million based on the afterhours close on Friday, the execs are going to have to pull off one hell of a fast embezzlement of epic proportions for this to get to $0 quickly. The bigger risk is the SEC stepping in and halting trading to investigate.

Bears: Institutions are selling as per the last two SEC filings.

You can find a significant reduction in the ADRs held by both Anson and Hudson Bay when comparing an early February SEC filing and a filing last week.

Bulls: Those hedge funds are subject to a Beneficial Ownership Limit as per the warrant agreements in those same SEC filings, so when they exercise warrants to acquire shares then receive new warrants then exercise those and acquire new warrants again, they can push themselves over the 4.99% or 9.99% limit; therefore, they must reduce their existing positions to continue their strategy.

So, what's the verdict?

There are still unanswered questions here. Quite a few. Out of an abundance of caution, I would move this into a category, long or short, for only the most aggressive investors now. If the company doesn't respond by Monday morning, I see little reason for bulls to stay with the name as risk escalates.

The digital footprint is concerning for the bulls. The lack of response or difficulty in finding information on FXK and HY leave big holes in the SOS story. I do think the answer potentially lies with Bridge Mutual.

Bears are putting heavy reliance on the digital footprint of themes, IP addresses, and creation dates plus, as you can see, potentially have some errors in their findings as well as a big rock left unturned.

Both sides still have work to do.

Get an email alert each time I write an article for Real Money. Click the "+Follow" next to my byline to this article.
TAGS: Investing | Options | Stocks | China