Sure, we had better breadth on Thursday. Well, it was better than it has been -- heck anything green is better than the red we've seen consistently for the last two weeks. But I don't consider positive 350 for breadth on the New York Stock Exchange much to write home about. We'll call it an improvement, and one that still hasn't changed any of the indicators. I still think there is base building going on in those names, but bases take time.

Of course, we need to talk about the bonds, because that's quite a move we've seen this week. There is resistance up here, but if they can break through, that would be a big change, wouldn't it? You might recall way back in late July/early August I wrote that I thought yields would rise, because no one seemed to be looking for it. Also the Daily Sentiment Index (DSI) for bonds had gotten into the 80s, which is a rarity for bonds. That DSI has come down to 42 now, so any further up move in rates needs to be watched carefully for a more serious change in sentiment.

I should note that I am still a fan of the dollar, but it hasn't done much. That 94 level on the DXY is still important.

Staying with the bonds, iShares IBoxx Investment Grade Corporate Bond Fund  (LQD) , an exchange-traded fund for investment grade bonds, hasn't gotten much attention lately. But LQD has come down quite a lot this month, like bonds have. It will come into support as it approaches those black lines, but this too is a change.

On the sentiment side of things, there is much anecdotal evidence that the market needs a shakeout. E-Trade (ETFC) is doing a commercial poking fun at bears, random people are asking about the stock market or precious metals or some hot stock like Kodak (KODK) a few weeks ago. But we all know it's my mother who is key, and earlier this week she asked for a stock to buy.

Now, I grant you, she wants a dividend-paying stock, so maybe that isn't really the same, but she wasn't asking back in March. You might recall in March she wanted to sell.

The American Association of Individual Investors (AAII), even showed a minor uptick in bullishness and downtick in bearishness. Here's something really eye-catching: The bears fell under 40%, which is only the third reading under 40% since we first dropped in early March. The last two times were heading into the June high. 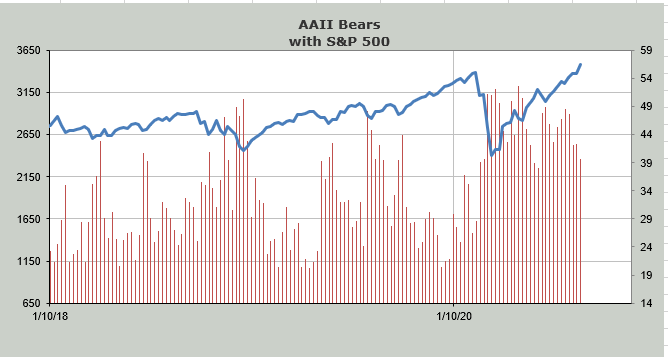 The National Association of Active Investment Managers (NAAIM) saw their stock exposure among their members rise to 106.5, which is the highest in years. 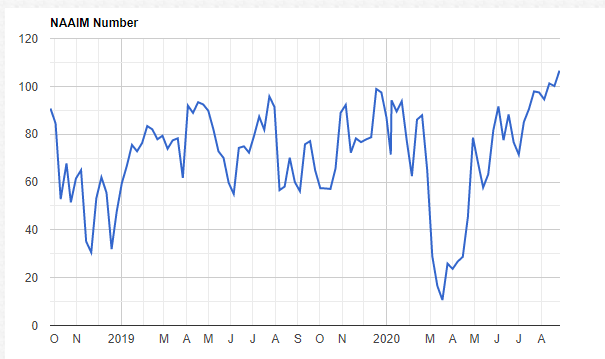 Yet on Thursday the market bent but did not break. Hey, at least the down-and-outers had their day in the sun.

Get an email alert each time I write an article for Real Money. Click the "+Follow" next to my byline to this article.
TAGS: Bonds | ETFs | Investing | Stocks | Technical Analysis |