By TIMOTHY COLLINS Jan 30, 2020 | 12:24 PM EST
Someone call the police, there's been a murder: Tesla TSLA shorts have been figuratively run over. Less than one full month into the new year, and shares are higher by roughly 40%. Over the last six months, we've watched them go from below $250 to nearly $650 without much pause.
I'm not a huge fan of the antics of leadership, but Telsa is a name I've highlighted several times as a great example on why shorting a stock against momentum or completely ignoring its technicals is dangerous. In this case, it's disastrous. That initial danger conversation began before the holidays when the stock sat in around $300. That's how strong a tidal wave of momentum can skew anything resembling logic or fundamental valuation.
The biggest reason I avoid this name is because of its cult status. It seems many either love or hate Tesla. Those are strong emotions, and emotion doesn't drive logical trading. It creates extremes. Extreme optimism. Extreme pessimism. Extreme moves.
And that's why the numbers don't even matter here. This has evolved to perception. The optics on the headline are good. We get to see the terms beat and stronger cash numbers on the balance sheet. Tesla has become about selling the dream. The haters are digging in their heels, but I'm not sure how much firepower they have left. The lovers are plunking down more coin in hopes that a cyber-truck that looks like something straight out of "Aliens" will sweep the nation. If they don't have a commercial with Sigourney Weaver driving the Tesla cyber-truck on LV-426, they are missing the marketing boat.
Seriously, the quarter-over-quarter figures look great, but year-over-year, automotive revenues rose 1% while gross profit fell 7%. Total revenues rose 2%, while total gross profit and gross margins fell. The margins took a hit from the significant increase in Model 3 production in deliveries while Model S/X fell.  Income from operations fell while operating expenses remained flat. Unadjusted earnings per share fell 28% year-over-year while adjusted ones rose 7%. The biggest positive was the 11% increase in free-cash-flow and 70% increase of cash on the balance sheet.
Tesla might be soaring for no other reason than the idea of it imminently going out of business is off the table. I could dig deeper into the numbers, and will eventually do so, but I already know the extremists out there are going to do it from every angle -- good and bad -- before I can. My time, and yours, would likely be better served to parse through those findings. 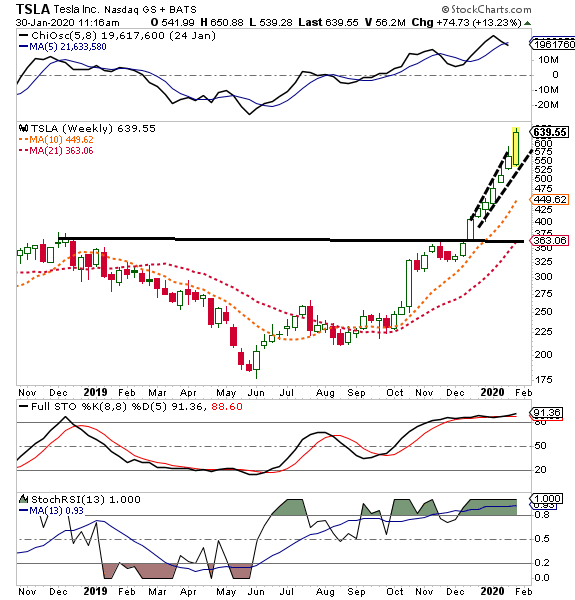 I don't have a personal view on a new position here, but if I were long, I would continue to hold the name. With the huge run of late, I would set up a trailing stop or hedge my downside. If I were short, I'd hold my loved ones a little closer, say a prayer to whatever deity it is that I honor, and figure out when enough is too much. A rolling put or put spread approach may ease the burden of being short shares. While shorts may look at the weekly chart and scream about the Full Stochastics and StochRSI running at extreme overbought levels, remember overbought can stay overbought for some time. Maybe, and it's a small maybe, but may the turn lower in the Chaikan Oscillator will provide a bearish divergence strong enough to stem the push higher, but until we get back under $575 on the weekly, the bulls outright own the bears.
Love it or hate it, that's the situation.
Get an email alert each time I write an article for Real Money. Click the "+Follow" next to my byline to this article.
TAGS: Earnings | Investing | Options | Stocks | Automobile Components | Automotive | Technology | Stock of the Day