While one major equity index managed to post a new closing high on Monday, two others violated support and one also violated its uptrend line.

So, the charts are sending a more mixed picture while the data, discussed below, suggest we are not out of the woods yet with more downside potential still in the mix. 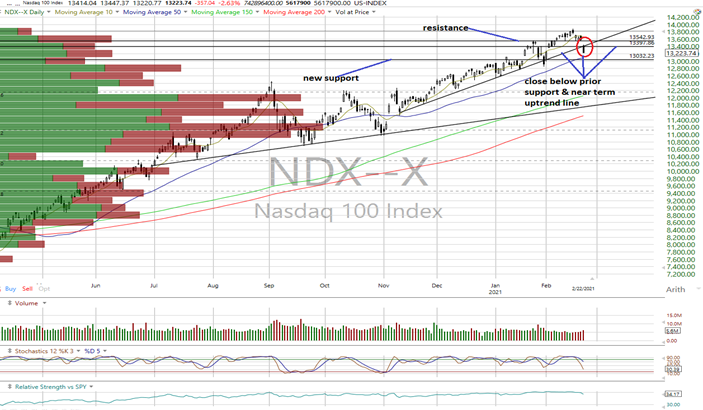 The NYSE saw negative breadth but positive up/down volume while the Nasdaq's internals were negative across the board.

On the plus side, the Dow Transports made a new closing high. However, the Nasdaq Composite and Nasdaq 100 (see above), which had been leading the markets higher over the past several months, both broke below support while the Nasdaq 100 also violated its near-term uptrend line.

So, regarding trend, the Russell 2000 is negative with the Nasdaq 100 neutral and the rest still in uptrends.

Market breadth has come more into question as the All-Exchange cumulative advance/decline line is positive, but the NYSE's is neutral with the Nasdaq's negative.

All but the DJIA and Dow Transports generated bearish stochastic crossover signals over the past week.

The McClellan one-day Overbought/Oversold Oscillators remain neutral despite Monday's selloff (All Exchange: -33.41 NYSE: -23.3 Nasdaq: -41.4). They are not yet oversold.

The OpenInsider Buy/Sell Ratio/Rydex Ratio dynamic remains cautionary. The Open Insider Buy/Sell Ratio at 19.0 remains in bearish territory as insiders remain largely on the sell side. In contrast, the leveraged ETF traders measured by the detrended Rydex Ratio (contrarian indicator) are still leveraged long at 1.22. This insider/ETF Trader dynamic continues to suggest caution, in our opinion.

The forward 12-month consensus earnings estimate for the S&P 500 from Bloomberg of $172.49 per share leaves the S&P's forward P/E multiple at 22.5x, while the "rule of 20" finds fair value at 18.6x. The valuation spread has been consistently wide over the past several months while the forward estimates have continued to rise consistently.

The 10-year Treasury yield has risen notably of late closing at 1.37%. In our opinion, the 10-year chart suggests potential for a move up to 1.5%.

While we are formally "neutral" in our near-term outlook, the data suggest more downside. Sell signals on individual names should be honored.