In our Feb. 11 review of SoFi Technologies (SOFI)  we wrote that "It looks like SOFI has made a low for now. In the short-run prices could make a bounce to the $16 area but ideally I would like to see SOFI trade sideways and build a base that could support a sustained advance. Scalpers could buy SOFI at current levels for a bounce. Risk to $11.05."

Unfortunately SOFI declined to the $9 area before bouncing. SOFI is trading higher Wednesday morning as its guidance Tuesday was stronger than anticipated by analysts (see how Stephen "Sarge" Guilfoyle is trading SOFI here).

Let's check on the charts again.
In the daily bar chart of SOFI, below, we can imagine that this Wednesday prices will be testing the declining 50-day moving average line around $13. Sustained strength above the February highs, should it happen, will be important.
The trading volume has been heavy since the middle of January suggesting some change in ownership from weak hands to stronger hands. The On-Balance-Volume (OBV) line is still in a decline from November telling us that sellers of SOFI were more aggressive than buyers.
The 12-day price momentum study shows higher lows from early December even as prices made lower lows. This is a bullish divergence and tells us that the pace of the decline slowed from December. Bullish divergences can at times foreshadow price rallies.

In the weekly Japanese candlestick chart of SOFI, below, we can see a bullish hammer pattern in February. The most recent candle is white or bullish and that gives us confirmation of a price low. The slope of the 40-week moving average line is still bearish but it is a lagging indicator.
The OBV line shows some uneven improvement from early January while the MACD oscillator has been slowly narrowing the past four weeks.

In this daily Point and Figure chart of SOFI, below, we can see that the software still shows a downside price target of $5 but a trade at $14 is likely to turn the chart more positive. 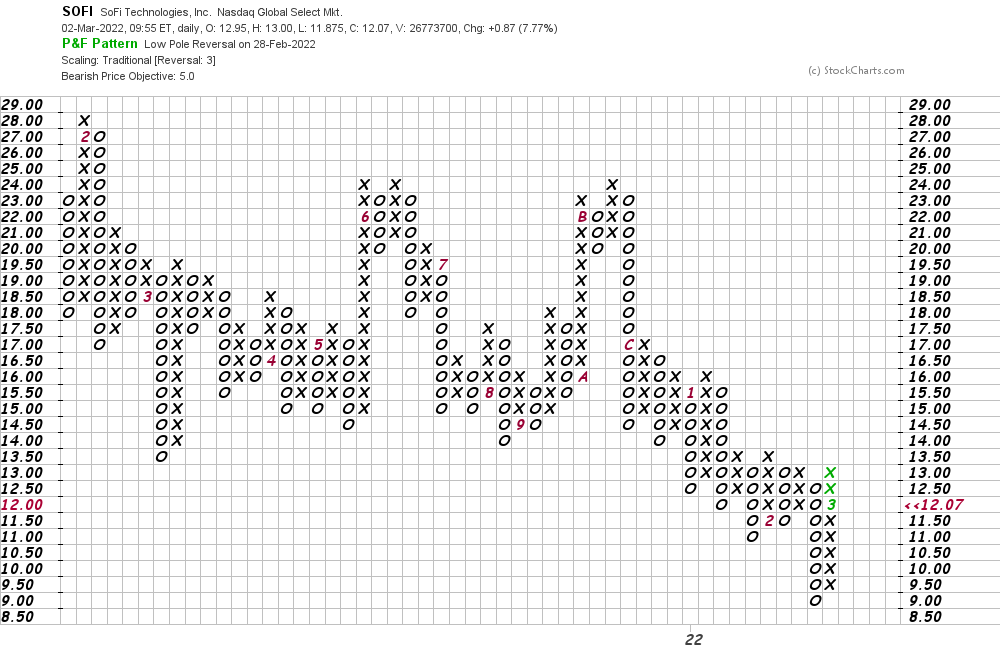 Bottom-line strategy: The charts of SOFI still suggest a stronger rebound in the near-term but a short-term dip to $11 is possible before renewed gains (a sell-side firm downgraded the stock). Traders could try to buy a dip to $11 risking just below $9.50.
Get an email alert each time I write an article for Real Money. Click the "+Follow" next to my byline to this article.
TAGS: Earnings | Investing | Stocks | Technical Analysis | Financial Services | Technology