I was quite hopeful that we would see an extreme in some of the other sentiment indicators on Thursday, but my hopes were dashed.

The American Association of Individual Investors (AAII) saw a few-point move down in bulls and a few-point move up in bears. So there was no real new extreme there. However the bears have gotten somewhat persistent in this particular survey and the four-week moving average has not seen a downtick in months and now finds itself kissing that 40% area.

It's not extreme in the way that March 2020 was. Nor is it extreme the way December 2018 was, or even January 2016, but if you step back you can see it is poking its head in that direction. 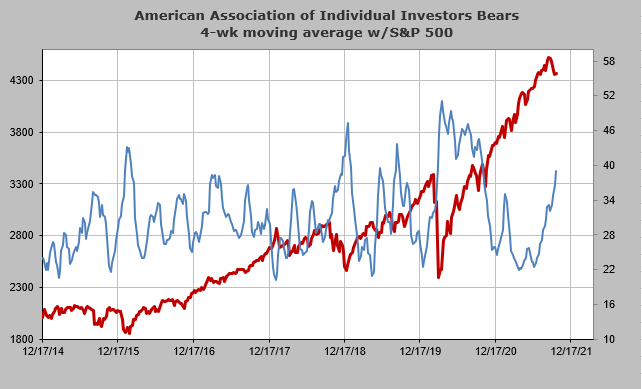 I was somewhat disappointed that the National Association of Active Investment Managers (NAAIM) saw an uptick in their exposure this week. They now stand at 68, where they were at 55 a week ago. I was hoping for a reading under 50. At least it didn't jump over 90. 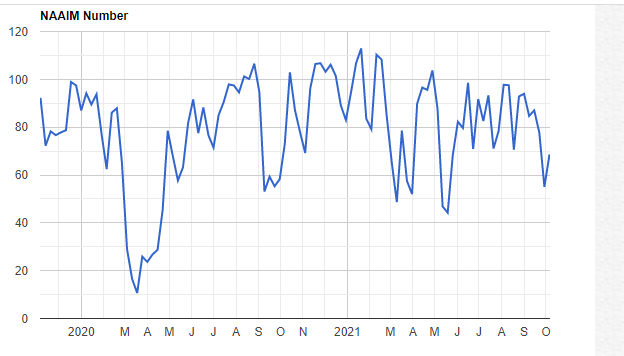 What should the takeaway be that the market traded pretty sloppily on Thursday, closing near the low of the day and the failure to do much more beyond the initial open? Here's my takeaway:

There are perhaps a handful of times during a calendar year that the market is intermediate-term oversold, short-term oversold, has positive divergences and negative sentiment, all at the same time. That's a recipe for holding your nose and buying. I think we had such a situation in mid- to late-May in technology. We don't have that now.

As I have noted, the intermediate-term indicators are not oversold. I can report that the Nasdaq Hi-Lo Indicator inched down to 33%, so it is pushing in that direction (20% is oversold). I can also report that the McClellan Summation Index stopped going down.

But look at my Overbought/Oversold Oscillator. It's been like a pretzel these last few weeks. It can't shoot up, it can't plop down. It is based on breadth and for the last two weeks we have not seen consecutive up or down days for breadth. Every other day does not make for a trend and it does not make for consistency. More importantly it does not make for an overbought or an oversold condition in the market.

Then there is the change in pattern as interest rates rose on Thursday, yet so did growth stocks. Wasn't that the narrative a few weeks ago? That we weren't supposed to like growth stocks when rates were rising? Keep in mind that banks didn't soar on Thursday's rate rise, either.

For the last week or two, tech has not moved one-for-one with rates, but to me Thursday was glaring, and no one seemed to care. With the employment number out on Friday, we'll get to see another test of this narrative.

In the meantime I'm not sure Thursday's rally changed many minds.