Zero dark-thirty. Now, that was a long night.

It started off with The Walt Disney Company (DIS) . Disney kicked off the evening when it reported a truly awful quarter in terms of corporate execution shortly after the closing bell. Markets for the most part had performed well on Tuesday, as they had on Monday and the Friday before that. Why wouldn't they? Everyone knows that a gridlocked government is good for equities, the president's party always does poorly in midterm elections, and that this president bears very low approval ratings two years into his first term.

Perhaps we should have considered the fact that this president's predecessor, a lightning rod for inspiring both his loyalists as well as his opponents, was still out there... endorsing candidates and more than hinting at his own political return. For there would be no red wave on Tuesday night.

There are enough seats that remain uncalled in both the Senate and the House for the GOP to potentially take control of both legislative chambers. However, that possibility is looking more and more remote as right now, the only seat in the Senate that flipped turned blue, and the House will be far closer than had been projected.

True, even with a small majority in the House, there would be a gridlocked government, but there can be no denial that whatever you think of President Joe Biden -- and do not accuse me of being political, for I truly try to keep my opinions to myself -- Biden has easily outperformed almost all recent to semi-recent presidents in his first midterm election. Perhaps this owes more to his predecessor's involvement than his own performance. Regardless of cause or reason, what reads on the scoreboard at the end of the game is what matters, and the scoreboard tells a tale of GOP disappointment.

If one believes that the equity rally of the past few days was simply traders (and algorithms) front-running an expected red wave in anticipation of increased GOP influence in Washington , then one must also believe that this recent strength will quickly dissipate. On that point, US equity index futures are trading lower very early on Wednesday morning. If one believes that this recent equity market strength was simply reliant upon any gridlock at all -- the reason being that GOP control of even just the House by a slim margin would be enough to thwart the Biden agenda and still slow inflation through arrested fiscal largess and an inability to bring forth new regulation -- then that game is still afoot, and could be for a little while.

While by most measures US equities put a third day of gains to the tape on Tuesday, trading volume remained below recent norms for a second straight day. This rally very likely has much to do with a US dollar that decreased in valuation versus a basket of its reserve currency peers for a third day and Treasury yields that decreased for the session.

Investors bought most of the Treasury curve ahead of election night and ahead of this afternoon's coming auction of $35 billion in US 10-Year paper. However, the yield spread between that 10-Year Note and the US Three-Month T-Bill that had been improving and moving toward un-inverting moved in the wrong direction on Tuesday, signaling probable economic hardship in our future.

There was perhaps a hint of what was to come in Tuesday's equity market performance. Winners beat losers by a rough 3 to 2 at the New York Stock Exchange and by the slimmest of margins at the Nasdaq Market Site as advancing volume took moderate shares of 62.7% and 54.5% respectively, of composite trade for names listed at those exchanges. I have already mentioned the less-than-convincing aggregate trading volume.

On the bright side... 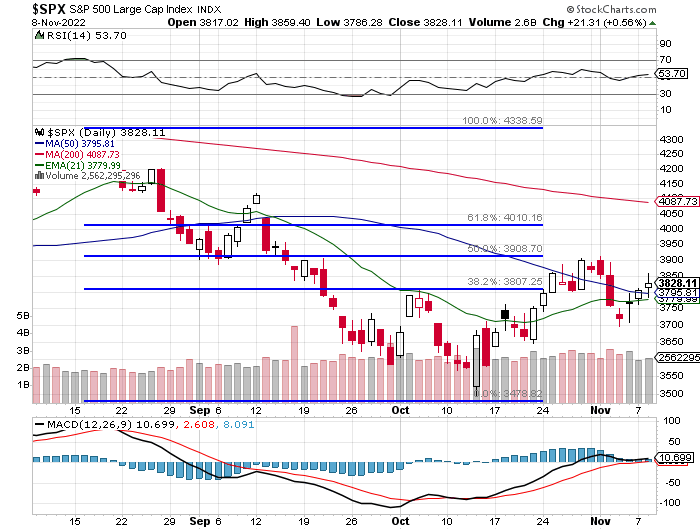 ... The S&P 500 found support at its 50-day simple moving average (SMA) on Tuesday. We may learn early just how much stickiness this level has. It has not had all that much of an ability to hold on recent moves above that line.

On the not-so-bright side... 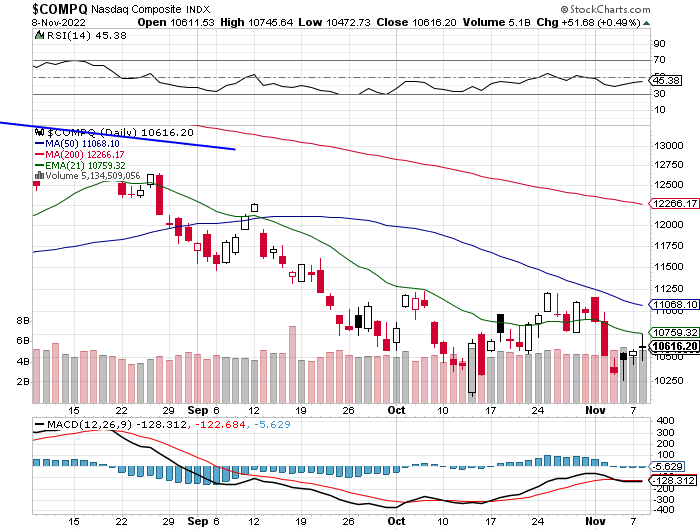 ... The Nasdaq Composite was quite rudely rejected on Tuesday at its 21-day exponential moving average (EMA). Recent history suggests that if the Nasdaq Composite can take this line, that it can be held for more than a week at a minimum.

What happened was that FTX was hit with about $6 billion in withdrawals over the three days going into Tuesday morning as Sol, which is/was the native token of the Solana blockchain that is/had been used by both FTX and Alameda Research, dropped dramatically. This forced Sam Bankman-Fried to reach out to billionaire and sometime antagonist CZ Zhao of Binance for a rescue. Binance has agreed to acquire FTX, but not FTX (US), which is a separate exchange in a "non-binding" deal. This implies that the agreement could still fall though.

I see Bitcoin trading below $17,500 a piece this morning, down almost 7% after bottoming at $17,172 on Tuesday, which was down 17% for the day at the time. Nearly every other digital token or coin was down significantly as well. Can cryptocurrencies, as an asset class, stabilize here at these levels? Anything is possible. I have long felt that this asset class was grossly overvalued and I still do.

That said, front-month gold futures gained nearly $100 per ounce from last Thursday's low to Tuesday's high. I saw a last sale for gold this morning at roughly $1,707.

Outside of Beijing, that is. A US delegation led by assistant US trade representative Terry McCartin met with Taiwanese counterparts in New York City on Tuesday in meetings meant to improve economic ties and trade relations between the two nations. The meetings covered agriculture and digital technology specifically as Taiwan, thanks to Taiwan Semiconductor (TSM) , is the world's leading foundry and a dominant player in the advanced semiconductor manufacturing space. Taiwan is also a key client-state for US defense and aerospace firms and a strategic geo-political partner as that island nation is not viewed as sovereign by the mainland Chinese government.

A follow-up meeting is planned later this month as US trade representative Katherine Tai plans to travel to Asia for the Nov. 13-17 ministers' meeting of the Asia-Pacific Economic Cooperation (APEC) organization. Taiwan is a member and Tai's Taiwanese counterpart, John Deng, is expected to attend. Simultaneously, the US and Chinese governments are believed to be trying to arrange a side meeting between Presidents Joe Biden and Xi Jinping at the G-20 summit in Bali on Nov. 15 and 16. Wonder how that's going to go...

In Phase 3 testing, patients receiving Wegovy for 68 weeks (not days) lost close to 17% of their body weight. Wegovy, however, remains in short supply. Mounjaro, when tested at the highest dosage for 72 weeks, showed an average loss of 22.5% of one's body weight. At the 12-week mark (84 days), making the test comparable to the one done by Amgen, Mounjaro produced an average weight loss of 8% of body weight.

I am long LLY largely for this reason and am expecting the approval process to potentially go smoothly for Mounjaro as the drug is already approved and in use for a completely different indication.

Given the time of day and space already taken up in this column, I am going to have to come back with a piece on Disney's awful quarterly earnings. I have received multiple requests overnight to cover this name this morning for Real Money and Real Money Pro. I will not leave you in a lurch. After all, I am long a small to midsize position myself. My analysis will be available to you shortly.

Get an email alert each time I write an article for Real Money. Click the "+Follow" next to my byline to this article.
TAGS: Drug Approvals | Earnings | Economy | Interest Rates | Investing | Politics | Stocks | Treasury Bonds | Pharmaceuticals | Real Money | Cryptocurrency