So, it rained on Monday in New York. It rained on Monday in quite a few spots around the country according to my social media sources. My kids have never quite understood why the man who raised them on the music created by Kiss, Van Halen and Motley Crue, always piped down and turned up the volume when the Carpenters showed up on the radio. It was that voice. The late Karen Carpenter probably had the sweetest, most soothing voice I have ever heard. Know what? I've always reacted the same way should Glen Campbell's name show up on the car's screen. Just nice, relaxing music.

Trading volumes may have slowed a bit at the New York Stock Exchange on Monday. Volume may have ebbed ever so slightly uptown. Most days, my key take-away comes from not just volumes but the way volumes break down, as I try to identify the behavior at the kinds of shop that actually have the firepower to impact the aggregate flow of capital.

Trading volume, for those paying attention, had been winding down at the headline level, as investors have become less certain now that the large-cap equities have recovered a whole lot of lost ground and have done so at nearly incredible speed. Does that mean that large-cap equities slow down? It could.

However, I have repeatedly said over recent weeks that I see an uptrend in equities that remains technically unbroken, and I have affirmed this even after a couple of tough days here and there. I have no agenda here, gang. I just want to win, I want my nation to win and I want you to win. I have no other game.

There will surely be another tough day, or days. There is, at this point, enough impetus for compulsive profit taking at probably a few "rules-driven" type shops. Wait, you hear that? What's that? Sweet music. Sarge, you complete eccentric, just get to the point. Sure, I hear you. Okay, check this out.

Monday morning evaporated into Monday afternoon. The Nasdaq Composite pushed higher, solidifying gains made beyond the 20- day SMA, scoring an increase of 1.1%. The Nasdaq 100, which is tech-centric and completely non-financial, only saw half of those gains. The S&P 500 pushed beyond the 50-day SMA and showed an increase at day's end of nearly 1.5%. Hmm, and led by the financials, who were in turn led by the banks, at that. The banks are typically yesterday's roast beef in a "recession". Why would they be snapping up bank shares?

The sweet music does not end there. Small-caps roared. The Russell 2000 experienced a nearly 4% run on Monday, while the S&P 600 ran 4.3%. The Russell 2000, for that matter, closed out the session standing upon the doorstep of its own 50-day SMA, so while I might expect to see some resistance at this point, the importance of this index of small-cap stocks getting back in the game cannot be overstated.

Oh, something else I found wildly interesting on Monday. Now, I'll repeat... while I write openly about just what I see, I know that I can miss things and that I can be mistaken. Assuming that I really don't know, it is part of my game plan. Now, if you think the crowd that moves money professionally actually has a clue, take a look at this.

The CBOE Options Total Put/Call Ratio printed at 1.05 on Monday. Nothing special, and firmly in between that ratio's 200-day SMA of $0.98 and 50-day SMA of $1.08. Nothing to see here... if you take the ratio at face value and move on. We won't. We'll tear that ratio in two and separate equity options from index options. Whoa. First, equities.

The CBOE Options Equity Put/Call Ratio printed at $0.58, not a care in the world, trending toward the lowest levels since late February, and well below both that the 50-day and 200-day SMAs for that ratio. Let's move on.

What is this? The CBOE Options Index Put/Call Ratio tells a completely different tale. The ratio spiked on Monday up to $1.74, way above its moving averages to the highest levels since early March.

The take-away here? Money movers are not buying protection for individual names on their books. They are, however, starting to bet against the market en masse. Watching these ratios this week could be telling. If not that, at least interesting.

Just not on Monday. I did think that the Fed would have to expand the parameters for lending to regional and local governments though its recently announced $500 billion coronavirus relief facility. I even indicated that idea in this column. What I did not expect was such an announcement ahead of this week's FOMC policy meeting. (That meeting goes into session today, with the dog and pony show set for tomorrow.)

Now, this lending facility will, for those municipalities with a suitable credit rating, expand from 50 states, 10 cities, and 16 counties under the former population minimums of 1M and 2M, respective residents, to a whopping 87 cities and 140 counties (potentially) as population minimums have been reduced to 250K for cities and 500K for counties. Debt may now be purchased at maturities of up to three years, increased from the previously announced two years.

I caught some flack, for referring to Jerome Powell as a "financial hero" in yesterday's column. I have not changed my mind. Jerome Powell and Steven Mnuchin, if and when we recover, will be the two that made that possible through their recognition of issues in real-time and their aggression in addressing these issues, even if there are nasty hiccups here and there, at incredible haste.

That said, I believe this week's policy statement will underscore the overt economic weakness experienced across nearly every corner of the nation, and will reinforce the necessity to remain increasingly flexible. My advice, though not asked for, would be to focus on clarification of already implemented programs and steer as clear of anything resembling forward guidance as possible. Every reporter worth their salt in that room knows darned well that policy guidance, beyond saying "for as long as necessary," is foolish.

Commodities traders sold the heck out of front-month WTI Crude futures while equities traders bought up the Energy Select SPDR ETF (XLE) four sessions in a row? Nobody cared.

Boeing (BA) CEO David Calhoun acknowledged that the firm would have to borrow money later this year, after already tapping the well for $13.8 billion -- and in doing so, stated "Our first priority is going to be to pay that back." The implication? That it could be quite a while, even years, until Boeing once again pays shareholders a dividend. Nobody cared. The stock was down small on Monday and is trading higher overnight.

Advanced Micro Devices (AMD) knocks the cover off of the ball tonight? The stock has been threatening to take a crucial pivot point for a week. Yes, I'm long the name. Go team.

We're talking semiconductors, Nvidia (NVDA) , finally got all the clearances required and finally closed on the Mellanox Technologies (MLNX) deal in a $7 billion transaction. The deal combines the high-end capabilities of Nvidia across the spheres of artificial intelligence and the data center with Mellanox Technologies' elite level networking capabilities. The deal immediately changes the numbers, as every analyst on Wall Street will have to adjust estimates going forward, even in the era of Covid-19.

This is what I'll watch for today, as there is no doubt that at a minimum, I would think this will be accretive to revenue across Nvidia's businesses. In the meantime, I will be taking my target price for Nvidia up to $360, from the current level of $330, until I get a chance to read everyone else's work and see if I am missing anything. 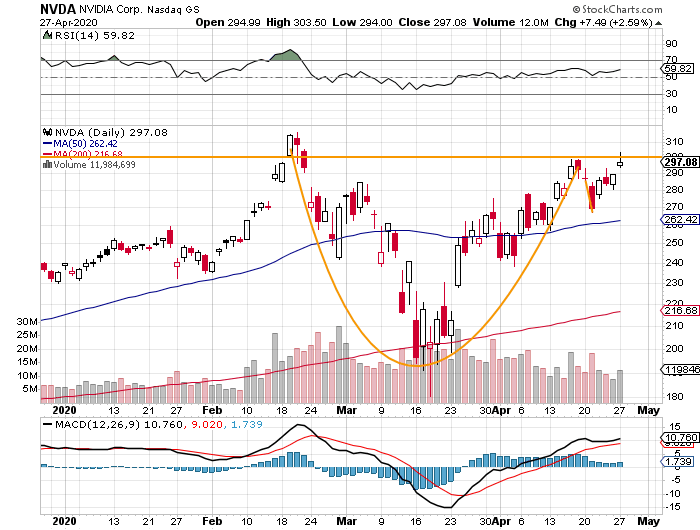 Today (Tuesday) could be the day that NVDA takes and holds that $300 pivot point.

On Monday evening, Moderna (MRNA) announced that the firm had submitted a new drug application with the U.S. FDA to evaluate mRNA-1273, which is the firm's vaccine candidate in the fight against Covid-19. The candidate is expected to enter into Phase 2 study in the second quarter, and while this study can take twelve months as 600 healthy adults have to be enrolled and then followed for that long, that a Phase 3 study could commence by this autumn.

In my view, this is a cautious positive. We still do not have results related to safety issues. The road remains long. There are smart people working hard and traveling this road. Hopefully, at least one breaks through. God bless.

Get an email alert each time I write an article for Real Money. Click the "+Follow" next to my byline to this article.
TAGS: Drug Approvals | Earnings | Investing | Markets | Stocks | Technical Analysis | World | Healthcare | Pharmaceuticals | U.S. Equity | Coronavirus