Everyone's focus is on the mega-cap tech stocks and their earnings this week. That's all I hear anyone chatting about. Oh, if they are not talking about the (terrible) upticks in COVID cases and  the delta variant.

And while I am drawing in lines, let me show you the resistance line on the S&P. Not to mention that the S&P 500 has been up for five-straight days now. There is no rule that it can't be up six or seven or more days in a row, but this line has been a bit of a lid for a few months now.

It has been my assertion that this week the window is open for this group to rally a bit more, into an upcoming overbought reading. But if it can't get through $222 within the next few days, the window closes. And that would make me wrong in my view.

Breadth on Monday was mediocre at best. But what really caught my eye is that the number of stocks making new highs continues to contract. Recall last week I begged for 200 new highs, on Nasdaq or on the NYSE (preferably both). Monday saw 123 new highs for the NYSE (there were 219 in early July). Nasdaq had 115 new highs (there were 208 in late June). This is a trend that has been trending down. The generals are holding up the market, which is why the rest of the stocks need to get going this week.

But it's also the number of stocks making new lows. They expanded on both the NYSE and Nasdaq on Monday. In fact, the NYSE chimed in at 67 new lows. Last Monday there were 96, so you have to ask yourself, if we gave up the 200-point rally and revisited those lows from a week ago, would there be fewer than 96 new lows? Seems doubtful to me.

But take a look at it this way. Not only has the 10-day moving average of new lows not ticked down the way they did at every other spike low and subsequent rally this year, they are now heading up again. 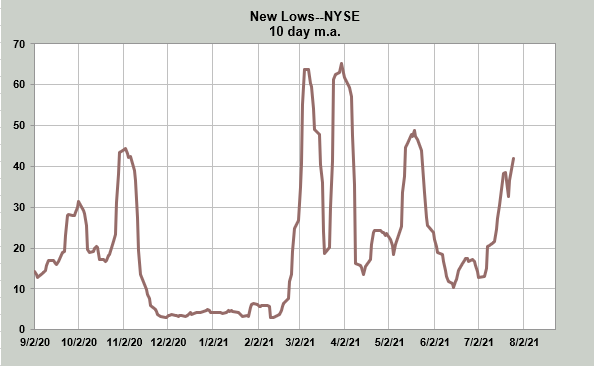 So there's a lot going on under the hood. We had a day where the reopening stocks did well, yet the underlying statistics in the market are quite fragile. The window is open for small caps to rally some more this week; they need to use that window.