So far my view that we should see "the others" rally this week (as opposed to mega-cap tech) has not occurred. Although the small-cap value stocks did outperform the small cap growth stocks today.

But let's talk about why these value stocks are so oversold. It's because of all that deterioration that has taken place underneath. Last week we looked at the Volume Indicator, which expresses the upside volume as a percentage of total volume on the New York Stock Exchange. It was at 44%, which I suggested told us how much deterioration was occurring, because it meant there has been more volume on the downside than upside, despite the indexes being at the highs.

The indicator I use to put these two together is what I term the Hi-Lo Indicator (it is a formula behind it). Nasdaq's currently resides at 37%. The first thing you notice is that it is lower than last fall's low and lower than this spring's low. In fact it is the lowest reading since the spring of 2020, when Nasdaq was half the level it is now. Wow. 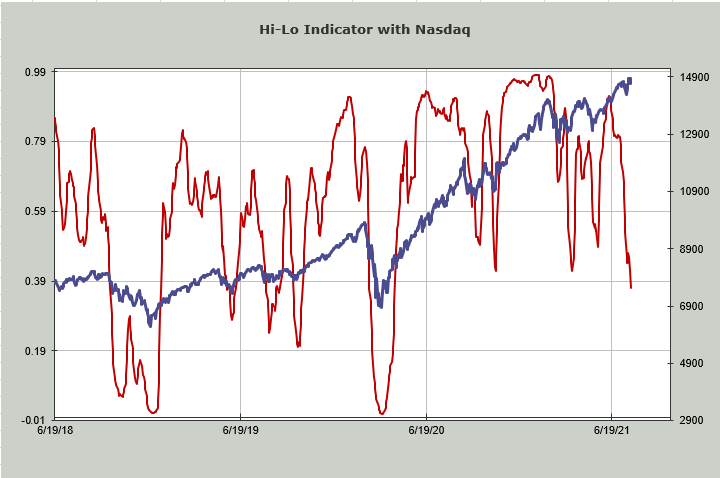 So if you want to know how it is possible that an oscillator that uses breadth sits in oversold territory while the indexes sit at all time highs, this is how. Think of it as a sand castle on a beach. The tide keeps coming in but a wave doesn't roll over the entire castle, but rather it pecks away at it, weakening the underpinnings. Right now just the top of the towers are still standing.

How can we resolve this? The "others" can rally. That's one way. Or everything can come down together, taking everything to an extreme oversold reading (i.e. the Hi-Lo gets under 20%) and sentiment gets terrifically sour.

The best news from Tuesday's market was that many of the others, while they went down, didn't really see much selling; it was more drifting. And the put/call ratio topped 1.0 for the first time since mid May.

One other interesting point is that the Russell 2000 is currently down about 5% on the month. If it can't rally 5% in the next few days (looking unlikely now) it will experience its first down month in ten months. That's how much deterioration there has been in July vs. all the other months.