How to summarize the Wednesday trading session here in the US? Impossible if one wants to make it short and sweet.

I think there were four distinct impacts or forces that pressured the marketplace one way or the other over those six-and-a-half hours. Actually, there were more than that, but four that stood out to me.

First, we were shocked, or at least I was, by the 89% deterioration in second-quarter earnings at Target (TGT) , as I wrote about on Wednesday. The poor quality of the balance sheet was the kicker -- far worse than what we've seen elsewhere. I thought Target was better than that. Turns out that Target trades at a far lesser multiple than either Walmart (WMT) or Costco (COST) for a very good reason.

Then the Census Bureau hit us with its July data for Retail Sales, which is not adjusted for inflation. The headline print (0.0% month over month) disappointed, but growth at the core (ex-autos) and the core-core (ex-autos and gas) looked much better.

After that, there were the Fed minutes, which really should not surprise nor should be seen as newsworthy given that everything mentioned within is three weeks old. Still, the bulls found the minutes dovish enough to rally immediately off of their release, while the bears found the minutes hawkish enough to take advantage of that rally and sell equity.

Lastly, and I mentioned this right here in this column 24 hours ago, there is the way that the S&P 500 reached out and kissed its 200-day SMA (simple moving average) on the cheek on Tuesday afternoon only to be sharply rejected in an algorithmic response that really just has not yet quit. From 10,000 feet, the rejection looks like this.... 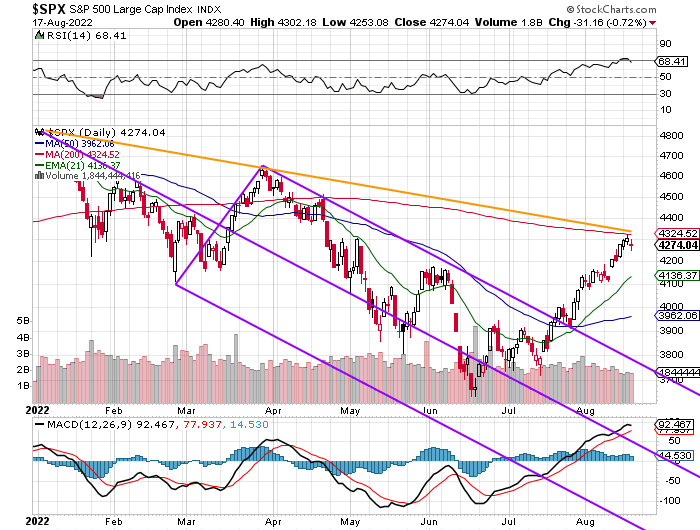 In real-time, Tuesday's sharp rejection at the 200-day line, the early Wednesday selloff associated with Target and July Retail Sales, the 2 p.m. ET rally off of the Fed minutes and the profit taking that followed looked like this.... 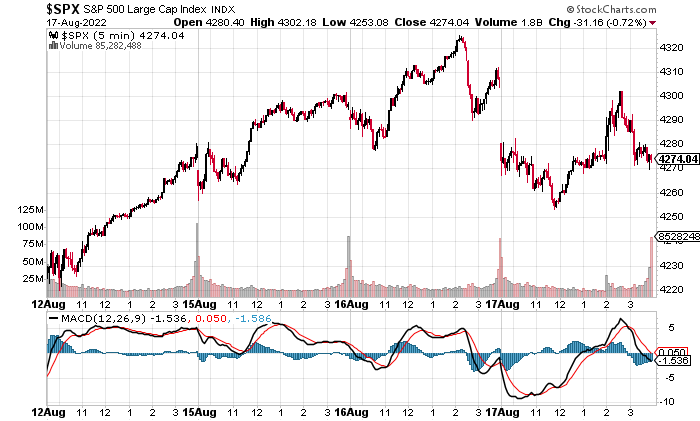 The 200-day SMA for the S&P 500 now stands at 4,324, which is a hair lower than where the index apexed on Tuesday. This is the line to watch for now, along with aggregate trading volume as the index either approaches or backs away. We can do that.

... So, headline retail sales were flat relative to June. Headline July Consumer Price Index (CPI) was also flat versus June. While that sounds negative, I think we might call that a win.

Ex-autos, retail sales increased 0.4% month over month, while ex-autos and gas, month-over-month growth of 0.7% looks quite robust. Small wonder. Sales of motor vehicles and parts suffered a 1.6% month-over-month contraction, while sales of gasoline contracted 1.8% from June as folks simply decided to drive less. Sales of clothing and clothing accessories and sales at department stores all contracted as well. That could bode poorly for a back-to-school season that was supposed to be pretty good as large swaths of the nation (such as the Southeast) are already back to school.

Where was the strength in July retail sales? Building materials, garden supplies and non-store (Internet-based) retail. Hmm, and July came after the relatively (compared to the rest of retail) strong quarters reported by Home Depot (HD) and Lowe's (LOW) .

.... Remember, these minutes are of the meeting that produced the policy decision of July 27. The Federal Open Market Committee decided to increase the target for the fed funds rate by 75 basis points at that meeting to 2.25% to 2.5%. I think It is safe to say that the members of the FOMC were clearly rattled by the June data for CPI that printed two weeks earlier at year-over-year headline growth of 9.1% and core growth of 5.9%. Both numbers were above consensus, and at least at the headline created a new peak for the cycle.

Generally, Fed officials backed the idea of raising interest rates to the point where policy becomes a clear drag on economic activity. Obviously, that would be a clumsy way to go about implementing policy and, in my opinion, rescuing the economy from a deep recession would almost certainly be too late at that point. Officials also signaled that once rates were at a place where they were cooling the economy that it might "be appropriate to maintain that level to ensure that inflation was firmly on a path back" to the 2% target. We can only hope that this is simple jawboning and that there might be (there must be, right?) a little more lightning behind the eyes than this, for the group that decides upon monetary policy for the world's largest economy.

Remember, quantitative tightening gets aggressive in September. Less will be required in terms of adjusting short-term interest rates. The Fed very well may be at a neutral or perhaps even terminal interest rate far earlier than it understands. At least Fed officials do seem to understand that their actions are going to (already are) slow (ing) the economy. The labor market will follow. Then what? They better know.

The Atlanta Fed revised its GDPNow real-time estimate for third-quarter economic growth lower for a second consecutive day. Atlanta took lower the contribution for Q3 real personal consumption, which took the model down to +1.6% (quarter over quarter seasonally adjusted annual rate) from 1.8%, just a day after taking the model down to +1.8% from +2.5%. I ask again... will anyone in DC admit that the US is in a recession if the economy contracts for three consecutive quarters?

Jackson Hole looms as a glaring opportunity (starting Aug. 25) for the FOMC to lay out a much more flexible, much more (truly) data-dependent forward guidance going into the final one-third of the year. Fed officials likely will need to show more finesse in the application of policy than they have ever shown themselves capable of before. There will be a need for increased competence in nuance this autumn.

Wednesday's market was a sloppy one. The S&P 500 gave up 0.72%, outperforming most other highly followed US equity indexes. The Philadelphia Semiconductor Index surrendered 2.48% and the Russell 2000 lost 1.64%. This helped push the Nasdaq Composite 1.25% lower. The Dow Transports took a 1.94% hit.

Ten of the 11 S&P sector-select SPDR ETFs closed out the session in the red. Only Energy (XLE) shaded green (+0.83%), while Consumer Discretionaries (XLY) , Materials (XLB) and Communication Services (XLC) all took haircuts of more than 1%.

Breadth was lousy. Losers beat winners at the New York Stock Exchange by about 4 to 1 and at the Nasdaq Market Site by roughly 3 to 1. Advancing volume took just a 19.7% share of composite NYSE-listed trade and a 45.2% share of that metric for Nasdaq-listed names. Aggregate trading volume decreased day over day for NYSE listings, but increased for a second consecutive (losing) session for shares of Nasdaq-listed companies.

It was perfect. On Tuesday, in "We May Now Be Approaching Another Important Top in the Market," Doug wrote....

"Passive investing - quant strategies like risk parity and exchange traded funds - are machine and algorithm driven. They are emotionless and operate at breakneck speed. Passive investing worships at the altar of price momentum - they know everything about price and little about value. This helps to explain why these systematic programs 'buy high and sell low.'

The influence of passive products and strategies cannot be understated as they have become the tail that wags the investment dog."

I would have loved to have written that. Could not, however, have communicated what it says more clearly.

On Wednesday, Apple (AAPL) announced that it will hold a launch event on Sept. 7. The thought is that Apple will unveil its lineups of iPhone 14s and Apple Watch Series 8s at that event with an eye toward having these goods in the stores by Sept. 16 -- in time for autumn, in time for the holidays. There is also thought that a new lineup of iPads may be ready this year as well.

There's more. Also on Wednesday, Nikkei Asia reported that Apple suppliers Foxconn and Luxshare Precision Industry are testing production of the Apple Watch in Vietnam. Nikkei Asia also reports that Apple has asked suppliers to establish MacBook test production lines inside Vietnam's borders as well. These products until now have been manufactured in China. China, as has become all too well-known, has become a much less reliable manufacturing hub since the start of the pandemic.

Moving more production out of China to a nation where Apple already has relationships could serve to normalize supply lines moving forward.

The stock has been on one heck of a run, up 35.3% since June 16. The shares have become technically overbought, maybe for good reason. 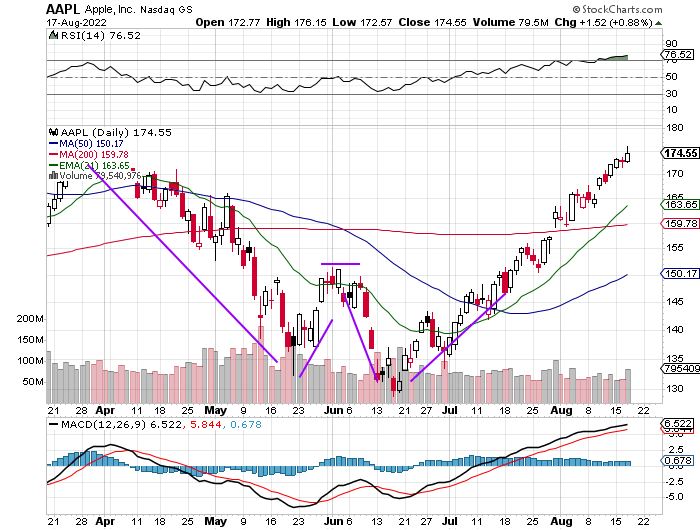 Double bottom with a $152 pivot? That would place my price target at $182. We're almost there. 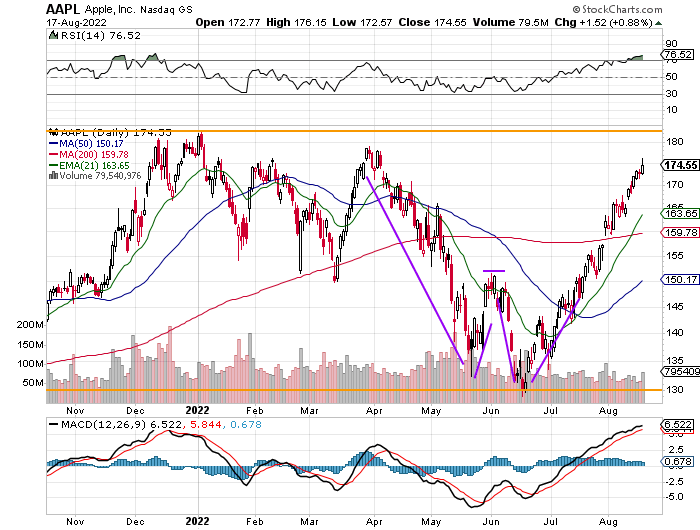 Or is that $182 level the pivot itself, as the upper boundary of a nine-month basing pattern? That would move my target up to a minimum of $218. Yowza.

(AAPL is a holding of Action Alerts PLUS. Want to be alerted before the portfolio buys or sells these stocks? Learn more now.)