Readers may recall that way back on Oct. 6, I wrote to you after initiating a long position in American Eagle Outfitters (AEO) to explain my thoughts. The stock had been trading lower at the time, and the initiation had come on weakness. How has the position gone? Quite well, thank you. Thank you very much.

At the time I had started overnight with 3/16th of what I consider to be a full position. I am up to a half-position. (it isn't that volatile of a name; I need dips in order to fill) and I am up 12% on that trade. Not bad for six weeks of work.

Now, earnings beckon. Time to put the old thinking cap back on and put it to good use. Let's do it.

I can find 12 analysts who state public opinion on AEO. Expectations for American Eagle's third quarter, which will be reported on Tuesday morning, are for earnings per share of $0.61 on revenue of $1.23 billion. The range of expectations across the 12 runs from $0.54 to $0.67 for EPS and from $1.2 billion to $1.27 billion for sales. At the consensus, these projections have inched up from the EPS of $0.60 on $1.22 billion in sales that I told you about in early October. If precisely accurate, these views would be good for earnings growth of 74.3% on revenue growth of 19.4%.

When I wrote that earlier piece, I had reminded readers that analysts Oliver Chen of Cowan and Jay Sole of UBS, both rated at five stars by TipRanks, had recently (at the time) reiterated their buy or buy equivalent ratings on AEO, and their $40 and $49 price targets, respectively. Readers should be fully cognizant that since then, Kimberly Greenberger of Morgan Stanley (four stars), whom I think very highly of, and is not apparently a fan of the stock, maintained her "hold equivalent" rating on the shares while reducing her price target from $29 to $27.

Obviously, we won't have an update on the balance sheet until tomorrow. Coming out of the second quarter, the balance sheet was considered especially strong for what has been primarily a mall-based retailer. American Eagle at that time had enough cash on hand to pay off its long-term debt balance more than twice over. Current assets absolutely dwarfed current liabilities as total assets also dwarfed total liabilities less equity. American Eagle runs with a current ratio not of slightly more than one, which is what most brick-and-mortar retailers aspire to, but of more than two, which is simply fortress-like for a business of this type. 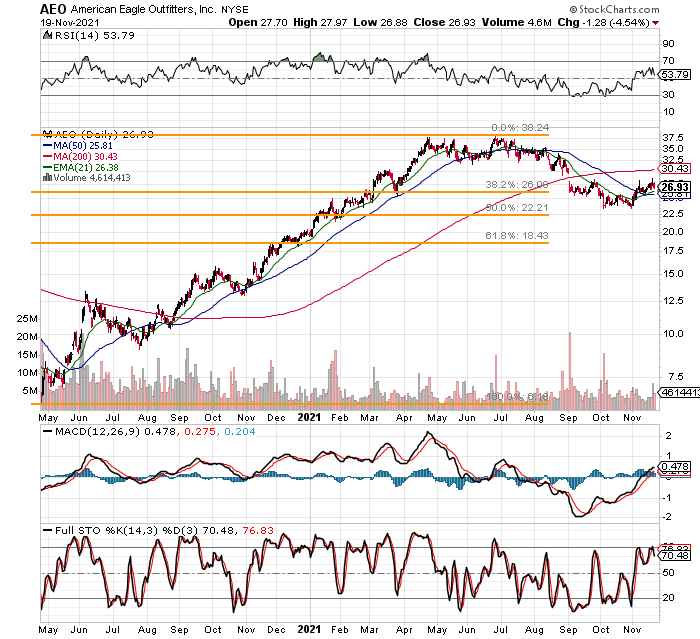 I had told you six weeks ago that I wanted to get aggressive at the 50% Fibonacci retracement level of the entire 2020/2021 rally. Close but no cigar -- hence, why I am left without a full position. 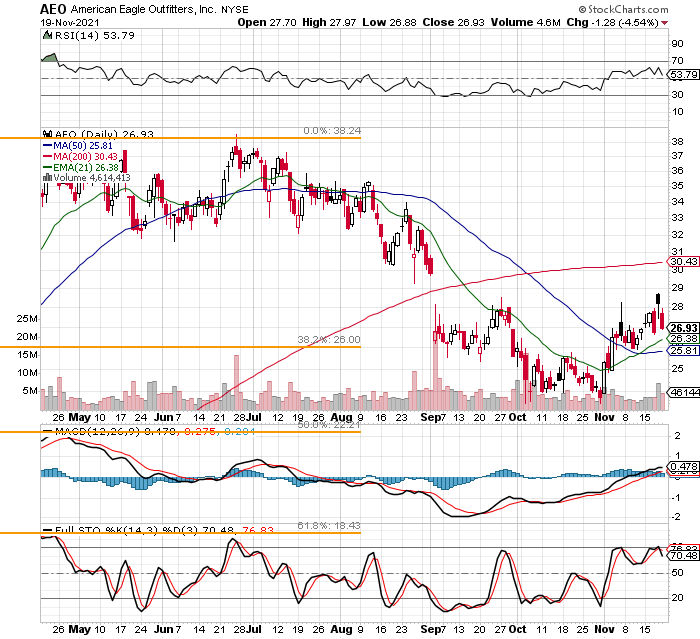 Readers will note that AEO recently enjoyed the benefits of a mini or swing traders golden cross (21-day exponential moving average over 50-day EMA) and has almost completely reversed the negative impact from the actual death cross (50-day simple moving average below 200-day SMA) that forced the lows that I had taken advantage of. Let's zoom in even closer. 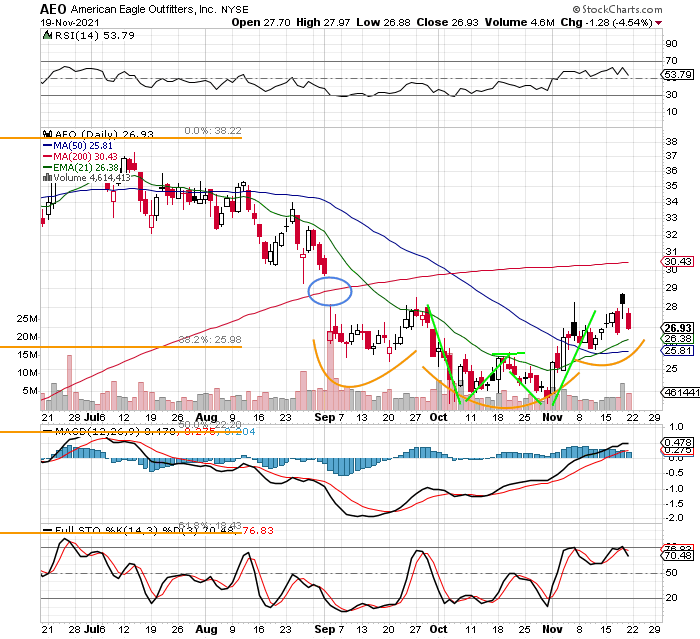 Well, well, well, what do we have here? Is that an inverse head and shoulders (orange)? Is this a double bottom (fluorescent green)? Side note. I might just be a weirdo, but I just now, in my late 50s, realized how much fun it is to use the word "fluorescent." You've been warned. All kidding aside, both patterns are bullish, and there still remains that not-yet completely filled gap created in early September. Technically (there are no sure things, don't listen to him), that should at least get the stock to the $31 level, which also just happens to be a 20% move if one observes the pivot created by the double bottom.

I'm not adding to the equity stake ahead of the numbers. If they beat up on AEO after the release, I will work toward expanding my exposure in that way. Right now, I can sell $31 calls expiring this Friday against the long for about $0.90. That seems like a no-brainer, at least to this two fisted, red-blooded, Irish-American, hard-charging man of the people. What say you, Cowpoke?

Target Price: $31 (not selling it all here, just letting some air out of the tires)

Get an email alert each time I write an article for Real Money. Click the "+Follow" next to my byline to this article.
TAGS: Investing | Stocks | Technical Analysis | Apparel | Consumer | Retail | Real Money | Earnings Preview