Not that they could see the future, but Salesforce.com (CRM) picked a rough day to report earnings. A late rally might provide a little broad market support, but CRM will be fighting a bit of pessimism as it reports after the bell.

I understand it is only a single day in the market, but emotions drive short-term trading as well as initial reactions to earnings. That could result in a bounce opportunity if CRM beats and provides solid guidance, but trades lower.

I often look to a company like Veeva Systems (VEEV) as a hint toward CRM given their close working relationship and sharing of many clients. CRM is, of course, significantly larger which is why VEEV only offers a hint, but that hint was definitely strong on the bullish side of the fence.

The options market is pricing in a big move this week. Expectations are for a 7% change by Friday compared to Monday's close. Compared to the actual results of the past two-and-a-half years, this is aggressive pricing. CRM, an Action Alerts PLUS holding, has only closed with a move greater than 5% the day after earnings one time in its past 10 reports. That doesn't scream buy volatility.

The market appears to be factoring the most recent report, which saw a 10% one-day move, with significant weight. That comes across more as an outlier than the new norm, though. 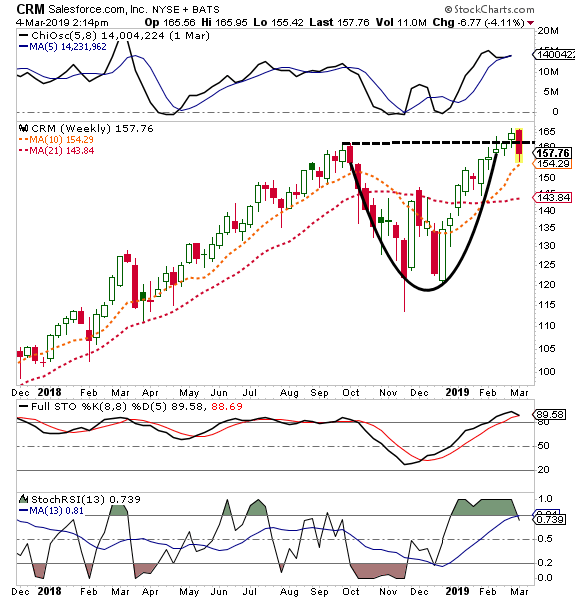 The real shame for bulls is the huge cup-and-handle setup that had been forming on the weekly chart. After a long period of consolidation between October and February, the shares appeared ready to tackle $200 on a close above $165. That could still occur as the handle is not broken yet; however, if CRM loses the 10-week simple moving average (SMA) as support ($154), then I expect a test of $145.

Should bulls reignite post-earnings and push the stock over $165 on the week, then I would not want to be short this name as bears will have lost any power they may have gained on Monday.

I'm Willing to Take a Small Gamble on Stitch Fix

It's possible we might be in for a bit of a run or short covering into Tuesday's earnings.

The data are continuing to send some positive signals.