We have seen other markets with group rotation, but this one is quite unique because it's like a microcosm of the world. In politics no one can seem to get along. The Left hates the Right and the Right hates the Left. The Bulls hate the Bears and the Bears hate the Bulls. None of these groups manage to meet halfway and get along.

In the market, we have the small caps and the big cap tech stocks or maybe I should say big cap growth and everyone else. They cannot seem to rally on the same day nor can they sell off on the same day. If they all rallied together, the market would be in good shape, because we'd stop the expansion of stocks making new lows and we'd see contraction. And we'd probably have an expansion of stocks making new highs. And of course we'd have decent breadth.

If they all sold off together, we would be able to get sentiment panicked and bearish. We'd probably be able to get a good oversold condition, too. But instead, it's like one group is the source of funds for the other and vice versa.

That said, late last week I noted that the McClellan Summation Index for Nasdaq using volume had ticked up modestly and despite the decline on Friday, it stayed that way for now. To this I can add that the McClellan Summation Index for the New York Stock Exchange finally stopped going down and started to make a stand late last week; it had its first uptick since July. Remember, this tells us what the majority of stocks are doing. I consider this a positive for the overall market. But I should qualify that because as you can see from Friday, good breadth does not always translate into the big cap indexes moving upward.

I would like to address another indicator, it's not one I regularly discuss. It's Nasdaq's cumulative volume. Think of it as Nasdaq's breadth. I prefer using the aforementioned Summation Index (using volume) for Nasdaq, since it smooths things out and tends to be a better tell.

But this breadth indicator made a higher high last week. Let me make this clear: It rarely diverges from Nasdaq. In fact, I am not sure I have ever seen it do so. Look at February: There was no lower high in this indicator (there was in the Volume Summation Index). There was no divergence at the lows, either. Nor was there a divergence heading into September.

Yet here we are with an indicator that is making new highs while Nasdaq is still far from its high. My inclination is to consider it bullish, but I will do so only as long as the Summation Index is also rising. 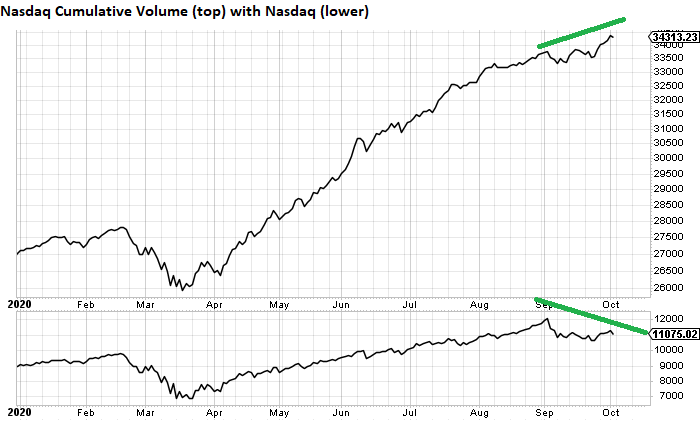 As for the week ahead, I'm inclined to think we see more chop, meaning if we're up early in the week, we're apt to be down later in the week and vice versa. The market still feels as though there is a high level of complacency to me.