You want to know what's fascinating? It's that the Dow Jones industrial average, that ancient index, has been down for five consecutive days. The last time it was red for six straight days was June 2018. Think of that for a minute. That means in the fourth quarter of 2018 decline, you know when we fell 20%, we did not have six straight days of red, yet here we are with that potential now.

So can we rally? Well using one metric we are now short-term oversold. The McClellan Summation Index is heading downward -- which is negative for stocks overall -- but we are at the point where it now needs a net differential of positive 3,500 advancers minus decliners to halt the decline. Once we get where we need positive 2,000, we have stepped a toe into oversold territory. Over positive 4,000 and we're solidly there.

My own Oscillator, which is the 10-day moving average of the advance/decline line, does not show, however, an imminent oversold condition. That would come about after multiple days of negative breadth. As of now we don't have a long string of negative breadth days yet, we have a handful.

In addition, the 30-day moving average of the advance/decline line, a more intermediate-term oscillator, only got overbought a week ago. My best guess is that there are still weeks to go before this indicator gets oversold.

Then there is sentiment. I was surprised that the put/call ratio on Monday wasn't higher. It chimed in at 102%, which all things considered seems relatively tame. The 10-day moving average of the ratio is still quite low, indicating there is still plenty of time for folks to get bearish.

The number of stocks making new lows was single digits for the New York Stock Exchange a week ago and today it is over 100. So there has been a rapid expansion of new lows, not a contraction.

Then there is the Volatility Index (VIX.X) . Longtime readers know that I am fond of looking for a jumpy VIX. This is more interpretation than science. I look at the VIX, having crossed that downtrend line and say it is finally on its way to jumpy. It is more likely, however, that it gets a day of rest or pullback and then goes up one more time. Again, this is strictly my interpretation of what jumpy looks like. But if you take a look at prior pops in the VIX, they tend to have a pullback and another move up. 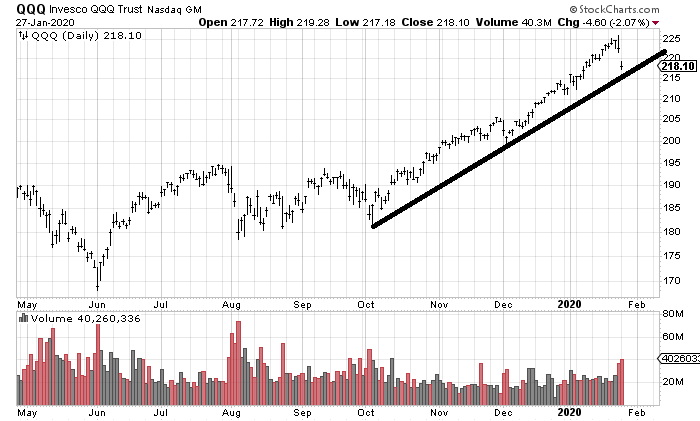 Jim Cramer: Finding Any Stocks With No Hair?

After a company reports we all know what's wrong, it's immunized. And that's when you can buy.

Sharing a Bad Loss and a Good Loss

You should have rules. If you don't, write some, test some, talk to others that have rules, and find one or more that work for you.