So it would seem.

Markets were hot on Thursday, from equities to commodities. Not so much for debt securities. Yields increased sharply across the still largely inverted Treasury yield curve for a second straight day, but everything else? Pretty much found a bid. Even Bitcoin.

It may have started with a better-than-expected (or feared) quarterly earnings report from Samsung Electronics in South Korea. The consumer electronics giant posted year-over-year revenue growth of 21% and operating profit that increased 11%. Samsung not only manufactures memory semiconductor chips, but everything from smartphones to televisions to household appliances... In other words, it makes a lot of things that require semiconductors of different types.

This set the entire group on fire. The Philadelphia Semiconductor Index rallied 4.48% for the session as the Dow Jones US Semiconductor Index popped for a similar 4.37%. This pushed the S&P SPDR Technology ETF (XLK) up 2.07%, finishing third among the 10 SPDR Sector ETFs that shaded green on Thursday. The semis were led by ON Semiconductor (ON) , KLA Corp. (KLAC) and Taiwan Semiconductor (TSM) . As focus was placed on the supply, design and manufacture of chips, these three names rallied 9.24%, 7.23% and 6.74%, respectively.

While the semis set the tone, Thursday's rally was quite broad. Are you ready for this list? The Nasdaq Composite, Nasdaq 100, Russell 2000 and S&P Mid-Cap 400 all gained more than 2% for the day, while the Dow Industrials, Dow Transports, S&P 500 and S&P Small-Cap 600 all scored increases of at least 1.12%. Though the semis may have been the hottest industry, Energy (XLE) was the hottest sector SPDR ETF as weekly oil inventories printed deep in the hole and the US Dollar finally took a breather. Cyclical and growthy-type sectors took the top seven positions on the daily leaderboard, while defensive types took the bottom four positions with Utilities (XLU) the only sector to finish in the red.

As you may have suspected, with most of your favorite equity indexes in rally mode on Thursday, trading volume was thin. This does take some luster off what was a feel-good trading session.

While winners beat losers at the New York Stock Exchange by more than three to one and at the Nasdaq by a little less than three to one, advancing volume took an impressive 89.3% share of NYSE-listed composite trade and an 82.2% share of that same metric for Nasdaq-listings. That's all well and good until one realizes that aggregate NYSE-listed trading volume contracted 7% on Thursday from Wednesday and 2.6% for Nasdaq-listed securities day over day as well. It's not like Wednesday was heavily traded, either.

Obviously enough managers have sought the safety of sitting on their hands going into June "Jobs Day." They will not likely have that option available next week as the earnings machine cranks back up and as June Consumer Price Index (CPI) hits the tape.

Potentially key, as markets rallied ahead of the release of the Bureau of Labor Statistics' June employment survey data, was the behavior of the major equity indexes. As noted here 24 hours ago, the Nasdaq Composite had taken back its 21-day exponential moving average (EMA) on Wednesday.... 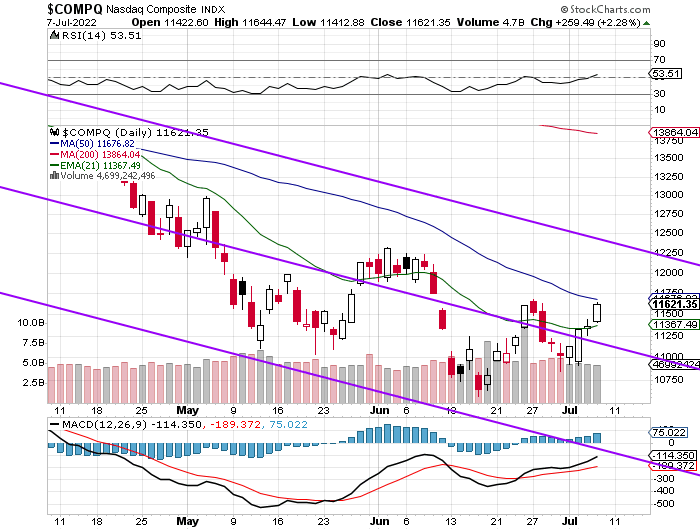 Readers will note that the index found support at that line on Thursday and rallied all the way to the doorstep of the 50-day simple moving average (SMA). Remember that in aggregate, portfolio and risk managers (my anecdotal opinion) tend to focus on the 50- and 200-day simple moving averages more so than any other moving averages in the making of decisions to increase and decrease exposure. That means that taking back the 50-day SMA would be a big freakin' deal. The Nasdaq Composite has not traded above that line for anything more than a brief probe since early April. 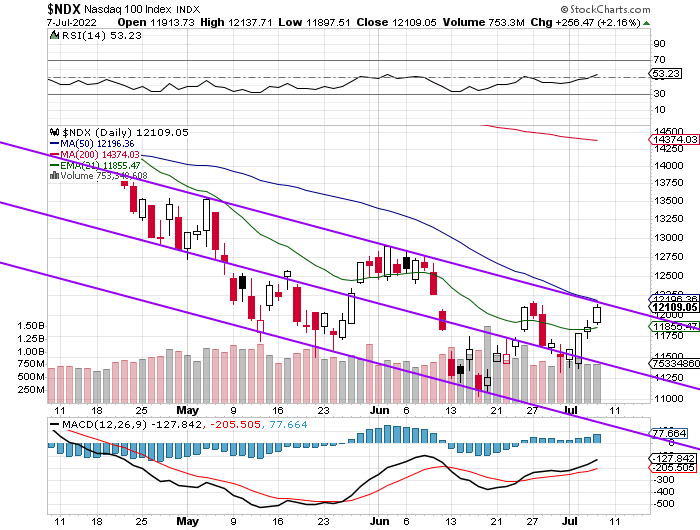 Readers will also see that the more tech-focused Nasdaq 100, by virtue of its exclusion of financial stocks, has come to the same doorstep. 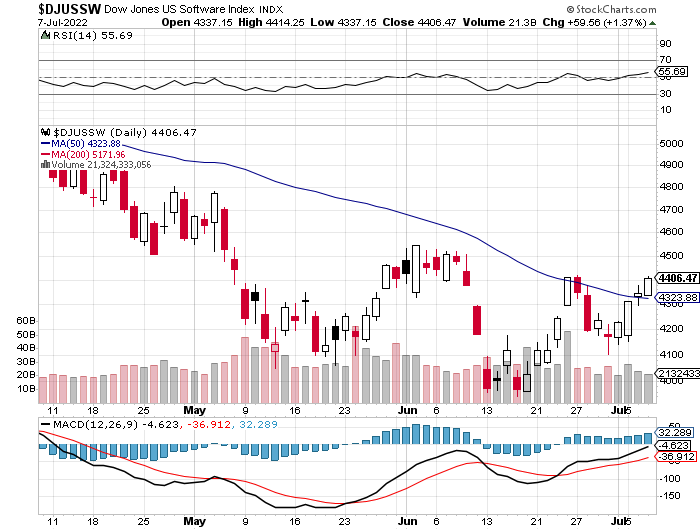 Pushing further into the tech space, we see that the Dow Jones US Software Index has not only taken back the 21-day EMA, but the 50-day SMA as well, potentially changing trend as Relative Strength actually leads the space. 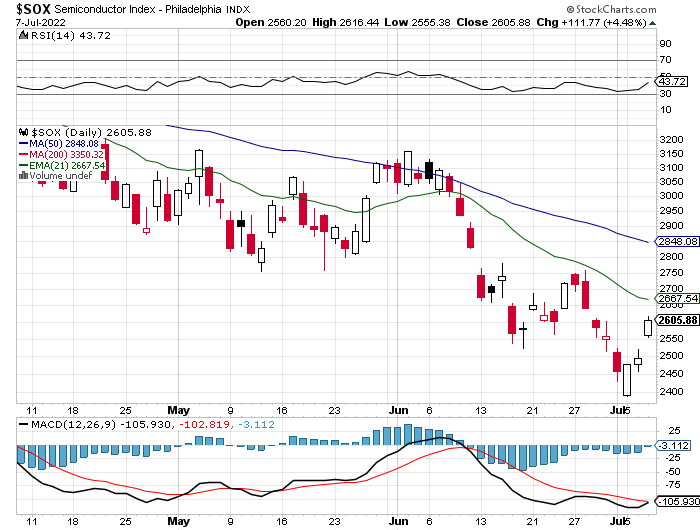 What does that mean? Do the semis still have some catching up to do? I think so. Do they have to catch up to the better-performing software names? Not necessarily. There is a commodity-like, cyclical-ish characteristic to the semiconductor space that software does not have to contend with. We know that there was some duplicative ordering during the height of the pandemic-inspired shortages. That said, Samsung had a far less lousy quarter than we thought, and it has a whole ton of exposure to the global consumer who is supposedly in worse shape than is the US consumer. Hmmm...

I am still long, and had fattened my long positions, in Advanced Micro Devices (AMD) , Nvidia (NVDA) and Marvell Technology (MRVL) , as I see these three chipmakers as the elites of the industry, with some exposure to the consumer in the cases of AMD and NVDA, but far more exposure to where it is that American and global corporates need to be in the data center and in artificial intelligence. Thursday put me into the green for the year in both AMD and MRVL. Of course, it has been a lot of work to get there and I still have more to do, probably to keep them there and get NVDA over the same hill.

That said, I think if there is some gravitational pull between the major indexes and the semis, or some passive pull between the techs in general and the semis, that at least for now, with a tradeable bottom in place for the major indexes for more than three weeks now, the semis have a brighter short to medium-term future than many understand. Earnings season will tell. We will not hear from many of these companies until well into August.

That's a lot of wood to cut between here and there. I count on nothing, but high-end semis might just turn out to be the baby that was thrown out with the bathwater.

Speaking on Thursday, both Fed Governor Christopher Waller and St. Louis Fed President James Bullard stressed the need to be aggressive in taking on inflation at coming policy meetings.

Waller referred to recession fears as overblown, while Bullard sees " a good chance of a soft landing."

... Bullard, you still have a shot. Waller, overblown? Really? We may or may not actually be in a recession, but we are at the doorstep and ringing the doorbell. Here's your dunce cap.

China considers allowing local governments to sell $220 billion of special bonds slated for 2023 ahead of time, in the second half of 2022.

.... These guys must be in a deeper hole than we even thought. More bridges and tunnels to nowhere. Buy lithium stocks.

.... Probably should grab some OXY on the next dip. This guy (Warren Buffett) may be going for the whole enchilada.

Apple (AAPL) may be planning a larger, more rugged Apple Watch for athletes.

.... I don't know if this increases the sale of wearables for Apple or just pressures margin, but as a consumer who has never in his life spent more than $25 on a watch, this got my attention.

(XLE, AMD, AAPL and NVDA are holdings in the Action Alerts PLUS member club . Want to be alerted before AAP buys or sells these stocks? Learn more now. )