The "Take 'em" crowd showed up Thursday, wading into a two-day equity market rout (actually, three ugly sessions in four) and bought the dip. This time, unlike on Monday, and unlike on so many "up" days for so long, the rally really was quite broad. Ahead of "Jobs Day," no less.

There were some reasons for positivity. No, the Fed did not decide to make a U-turn on its decision to prioritize inflation control over labor market performance. Preliminary data did come in from South Africa that possibly shows the Omicron variant of COVID as more transmissible, maybe three times as much as previous variants, which is a negative. But those very early results still show the possibility of this variant producing severe disease less often than its predecessors.

This would be a positive, but let's keep things in perspective. What we are learning is still anecdotal in nature, and demographically, South Africa, and the Johannesburg area specifically, are "younger" than much of the more developed world. Younger folks have fared better than their older counterparts with most COVID variants to date. The strength in equity markets, at least, was more profoundly experienced in areas that would benefit more directly from economic growth, or should we say, less pressure on activity than might have been feared. The Transports and the small to midcap equity indices finally had their day after a long string of successive beatings. The Russell 2000 scored an increase of 2.74% after closing lower for 10 of the previous 11 sessions.

All of your favorite large-cap indices participated as well. The Dow Industrials got a boost from some positive news for Boeing (BA) out of China, as well as Apple's (AAPL) midday comeback. The S&P 500 showed a 1.42% gain by the closing bell, as both the Nasdaq Composite and Nasdaq 100 closed higher for the day, but less high as the Technology sector select SPDR ETF (XLK) finished 10th place among its 11 sector SPDR peers. All 11 managed to close in the green, while nine of 11 tacked on at least one percentage point. The top three places on the sector performance tables were all taken by cyclical types.

Breadth was very positive for a nice change. Winners beat losers at the New York Stock Exchange by almost three to one and at the Nasdaq Market Site by three to two. Aggregate trading volume, while still heavy, was the slowest in three days, which might send a cautionary message, but capital did flow in and not out on Thursday. Advancing volume comprised 81.9% of the NYSE composite, while advancers took 64.7% of the action for Nasdaq-listed names.

While it would be nice to think that the SARS-CoV-2 coronavirus might be evolving into something less deadly and the "not yet quite" fact that this might be true could put a bid under our marketplace, markets were also ready to breathe a sigh of relief as the U.S. Senate finally seemed to play nice in the sandbox, even if short-lived, for long enough to prevent the federal government from going into partial shutdown.

On Thursday evening, the Senate voted 69-28 in favor, after the House had already narrowly (221-212) passed, the continuing resolution bill, and then that legislation was rushed to the president's desk in order to beat a 12:01 ET deadline. This bill, now law, is really just another kicking of the can and will keep the lights on through Feb. 18 in addition to providing $7 billion for assistance to resettle evacuees from Afghanistan.

From here, the focus in the nation's capital will turn to actually setting a debt ceiling (or not), passing an annual defense policy bill, and the president's $2 trillion-ish tax and spend climate/healthcare/education bill. In other words, last night was the low-hanging fruit. Cooperation will be tougher to come by from here.

On top of all that, OPEC+ decided to go ahead with a 400,000-barrel-per-day production increase for the month of January, apparently betting on the continuance of what has been a post-pandemic (though we are still in this pandemic) lockdown economic recovery, and against significant lockdowns based on the new Omicron variant. It was known that Saudi Arabia and Russia, the de facto leaders of the OPEC cartel, and the "plus" group of allied producers had debated pausing on such increases in monthly production that had been planned ahead.

The Ducks Are Lining Up

The Fed will go into its policy meeting media blackout period this weekend ahead of the twin releases of itsr next statement and economic projections on Dec. 15. Fed members also make a habit of keeping their traps shut on Jobs Day. That means that at least a few Fed speakers would be out and about on Thursday.

We all know how Chairman Powell feels about speeding up the tapering of the central bank's balance sheet expansion program. We all know that he was backed up by Cleveland Fed President and incoming voting member of the Federal Open Market Committee (FOMC) Loretta Mester on Wednesday. On Thursday, three other Fed officials publicly got behind increasing the pace of withdrawing accommodation this month.

Fed Gov. Randal Quarles in what was really a "farewell address" supported the idea when asked a direct question by a reporter, while separately, both San Francisco Fed President Mary Daly and Atlanta Fed President Raphael Bostic each mentioned either a speedier timeline or lifting short-term rates off of zero in 2022. Both Daly and Bostic are outgoing voting members of the FOMC and both are usually characterized as being dovish.

A strong November jobs report would support this shift in policy focus. Yes, you should still root for your country.

After a stunning first nine months or so, Docusign (DOCU) , an early pandemic darling, had underperformed in 2021. At Thursday's closing price of $233.82, DOCU was up only 5% year to date. On Thursday evening, DocuSign reported third-quarter results that beat the street's expectations for both the top and bottom lines. Revenues even grew 42%, including acquisitions. Then came the guidance. DocuSign expects to post current-quarter revenue of $557 million to $563 million, which was below the $575 million that Wall Street had in mind.

Sales like that would produce growth of roughly 30%, which would be a third consecutive quarter of decelerating year-over-year growth. Wall Street came for their pound of flesh overnight. Did they ever? North Americans will not be waking up for some time yet, but the last sale that I see is currently $158.75, down 32% from Thursday's close. Ugly.

Those considering buying this dip may or may not be right, but understand that DOCU just became a candidate for tax-loss harvesting later this month. I would rather day trade this name than take a stand.

Sarge's third favorite semiconductor company, after Nvidia (NVDA) and Advanced Micro Devices (AMD) , also reported third-quarter results on Thursday evening. Marvell Technology (MRVL) posted adjusted earnings per share of $0.43 on revenue of $1.21 billion. Both numbers beat the street and show up as 72% earnings growth on 61% sales growth. Once thought of as a 5G play, Marvell is now a well-rounded semiconductor name. Its largest business, which is now the Data Center, grew an amazing 109% year over year and now drives roughly 36% of all sales. Growth was also robust up and down many individual business lines of Marvell, which is a holding of the Action Alerts PLUS portfolio (as are NVDA and AMD). 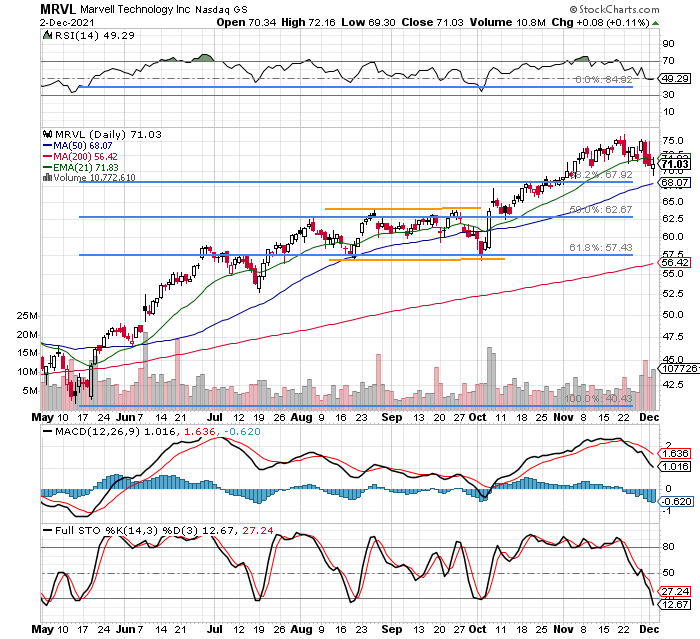 Readers will see that the breakout from the base with the $64 pivot has now accomplished its mission. I intend to make a sale in the $84-$85 area if I still can once this article is published. Then, it's time for a new look. By most metrics, MRVL came into last night's report anywhere from oversold to neutral. That will not be true by the time the opening bell has peeled its last. We'll have to make adjustments.

- Make a minority sale, as the $78 price target has been breached.

- Temporary new price target of $98 (25% premium to old target, until I see a new pattern develop)

(MRVL, NVDA, AMD, AAPL and BA are holdings of Action Alerts PLUS. Want to be alerted before the portfolio buys or sells these stocks? Learn more now.)

Get an email alert each time I write an article for Real Money. Click the "+Follow" next to my byline to this article.
TAGS: Earnings | Federal Reserve | Investing | Oil | Stocks | Fintech | Semiconductors & Semiconductor Equipment | Technology | E-Commerce | Real Money