Off through the new day's mist I run

Out of the new day's mist I have come

I hunt, therefore I am

Harvest the land, taking of the fallen lamb

Off through the new day's mist I run

Out from the new day's mist I have come

We shift, pulsing with the Earth

Company we keep, roaming the land while you sleep

I had been sifting through the wreckage. Picking up a few shares here. A few shares there. Strengthening a few long positions where damage had been done through the regular session.

Did I buy back Nvidia (NVDA) ahead of the split? Not yet, so "no". I had intended to, but the stock was too hot on Monday. So, I stand flat. That was a great out, not that I can take credit for selling all of it intentionally... but that was a great out.

I did try to set up Keycorp (KEY) from the long side going into this morning's release. Not that I expect much, but I do expect at least some kind of an attempt by bond traders to reverse the recently (very) intense action at the longer end of the yield curve. We get that, and there will be a relief rally across the banks more likely (in my opinion) to significantly impact the regionals over the large national/global money centers.

At that point, I called it quits for the night, finishing off an "old-school" 17-hour day. Since I knocked off, the New York Mets gave up 11 runs to the Cincinnati Reds, which was OK because the Mets scored 15 runs. Oh, and European equity markets opened higher, taking U.S. equity index futures with them prior to hitting some resistance in the early going. That, while the U.s. 10-Year Treasury yield moved back above 1.2% (before heading back down to the 1.17%s), and Bitcoin trades on the wrong side of $30K a piece.

The day finally came. Cages were rattled. Cradles were rocked.

Hence the rising new case numbers of infection across not just the less-developed, less-vaccinated world, but across the well-developed, more highly vaccinated world as well, took not just the markets, but the public who happily had placed their heads in the sand for a bit, by surprise. That's why the advice issued by both the CDC and the State Department for Americans to avoid traveling to five countries currently experiencing uncontrolled spread, including the U.K. and the British Virgin Islands, hit so hard. It was hard proof that while we may never go back into a mandated lockdown, that the virus will almost certainly still act as an economic headwind, probably globally, and nationally and most assuredly regionally. On that note, Apple (AAPL) has told employees not to rush back to the office.

Once again, capital would flow into the perceived safety of U.S. Treasury markets, increasing demand for the U.S. dollar. Down went most of the commodity complex and with it all 11 S&P sectors, led by the cyclicals, led by the "reopening" stocks. Down went travel (airlines, lodging, cruise lines), down went the Energy ( (XLE) ), Financial ( (XLF) ), and Materials ( (XLB) ) sector select SPDR ETFs.

To illustrate Monday for the layperson best, Peloton Interactive (PTON) ran 7.1%, while Planet Fitness (PLNT) took a 5.4% beating. Think that explains it in a nutshell.

The good news is that there was almost no panc on Monday. The action was ugly indeed. The spread of the virus merely cemented what we already knew -- that economic growth is for now, past-peak. All of the good stuff had been priced in. Now, what could go wrong? Small-cap stocks had been telling us since mid-June that all was not well. Smaller businesses along with the Transports are the most reliant upon the business cycle for support. That repricing is, in my opinion, close to finding support. 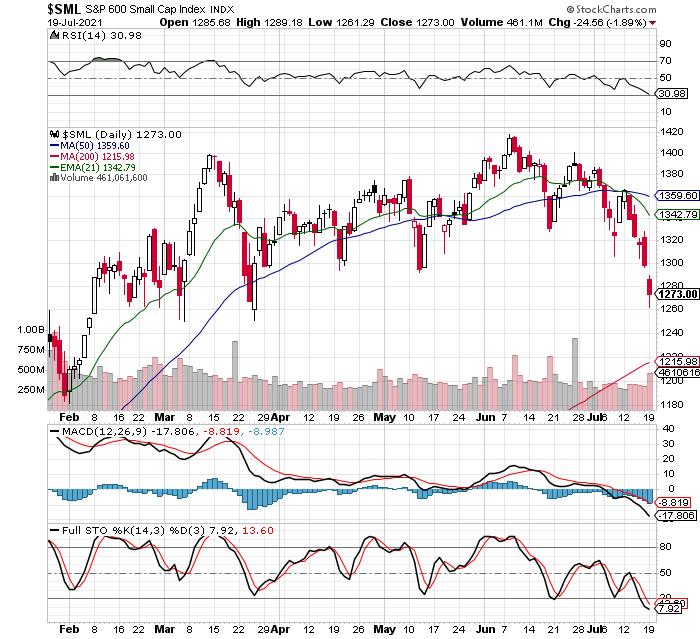 It is difficult to find an uglier chart than that of the S&P SmallCap 600. Just take a look at that action in July.

The daily Moving Average Convergence Divergence (MACD) appears to be in free-fall, as Relative Strength just confirms what the Full Stochastics has been telling us for days now. Small-caps in aggregate are significantly oversold. The RSI (above the chart) just hit 30 on Monday. RSI readings of 30 tend to signify a technically oversold condition. However, a reading of 20 or so does the same for the Full Stochastics (bottom of the chart). That reading has touched down below 8.

So, tell me again, Sarge, how was there no panic? Sure. The S&P 500 is our broadest and most important equity index. Don't look at the Dow Industrials. The Dow is too narrow to follow day to day,and will simply track the S&P 500 over time. On Monday, losers beat winners at the NYSE by roughly 11 to 2, and at the Nasdaq by 5 to 2. Declining volume clobbered advancing volume at the NYSE by almost 9 to 1, and at the Nasdaq by a less awful 5 to 3. One would think that the S&P 500 might simply crash on such a day. It wasn't cheery, but the S&P 500 "only" gave up 1.6% on Monday, closing "just" 3.1% shy of its all-time intraday high.

Take a look at this: 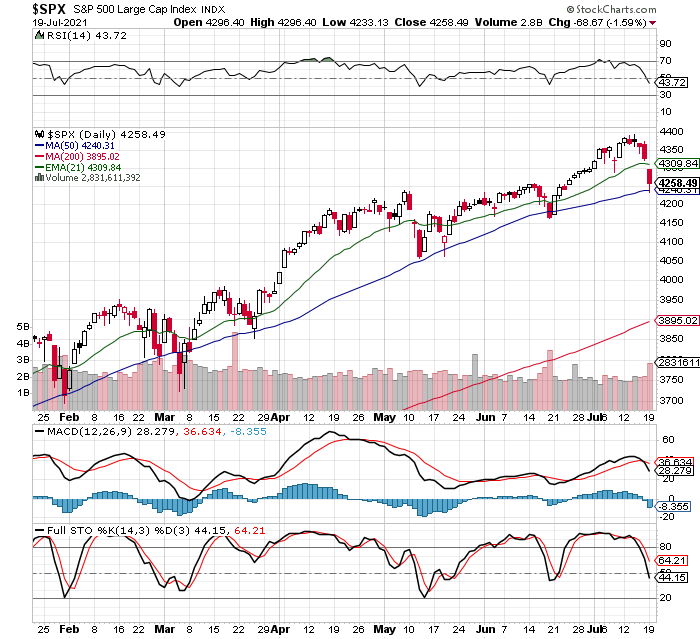 See that thin blue line? See how the index kissed that line and rebounded into the closing bell? Actually, it was not that easy. That line, one of the two most important lines in our world, is the 50-day SMA (single moving average), and it was indeed pierced seven times on Monday afternoon. That means that the algorithms that force price discovery in this modern era, made seven attempts to probe portfolio manager support on Monday. The PM's as a group, held.

Hence, many PMs have pre-programmed their own algorithms to react to either of these two lines breaking in earnest, to reduce their exposure to whatever they are in, that would provoke that call or pre-COVID, that tap on the shoulder. No, not THAT TAP, the tap that comes if one ignores the first tap.

In short, the good old days are done, There are no more "cowboys" or "gunslingers" out there who draw in immense amounts of business by making crazy bids or offers on large blocks of equity. What there is now is measured, incremental --and acted upon without reasoned thought emotion, or ego.

The PMs held their line. That's what matters. Then International Business Machines (IBM) beat Wall Street expectations, and the entire complexion of our overnight marketplace changed.

Will This Mood Change Hold?

If I knew this, I would not be discussing markets at 03:30 on a Tuesday morning with a very handsome, "past-peak" middle-aged man in a darkened window.

Let's do a checklist: Is inflation still hot? Are supply chains still kinked up? Is economic growth certain? Organic? How about fiscal policy? Monetary policy? The virus?

Hmm, you aren't sure of anything, Sarge... are you? The Mets won. Other than that, no. Oh, while I am thinking about baseball, does anyone else think the Mets should sign "Big Sexy"? He is pitching well down in Mexico. That's high-level baseball. He is 48, but so what. While they are at it, they should send the Orioles a sandwich and bag of baseballs for Matt Harvey. Still brings major league heat, just can't pitch. If it's mental, bringing him home could help.

Online brokerage Robinhood filed with the SEC on Monday to offer 55 million shares of class A common stock at a price somewhere in between $38 and $42, valuing the company at as much as $35 billion. Goldman Sachs (GS) , JPMorgan (JPM) , and Citigroup (C) are leading the deal, and having walked in those investment banking shoes, I would do what I was told to do because I was getting paid. As an investor, though, LOL.

I am about as likely to invest in Robinhood as I am to put a few thousand dollars in a garbage can and light the can on fire. No thank you.

Tuesday night. Chipotle Mexican Grill (CMG) and Netflix (NFLX) both report. Though I really, really like burritos, I am flat CMG. Netflix, however, is a different story. I am set up for a bearish reaction tonight, but in my most risk averse way. Put bluntly, I think the quarter will disappoint, but I am not willing to bet the farm on that, or against Reed Hastings in any significant way.

Wall Street is looking for EPS of roughly $3.15 on revenue of $7.32 billion, which would be good for year-over-year growth of 19%. That would be a deceleration of growth if realized.

A slowdown in new subscribers is expected. The company told us that three months ago. It guided to 1 million new subs at that time. Wall Street is looking for 1.1 million.

While Netflix is a favorite for many who stream their entertainment, we do know that there had been a pandemic-induced production slowdown. We do know that Netflix is more expensive to the subscriber than is the competition. While Disney (DIS) has been raising prices a la carte, the Disney Bundle is still just $12.99 per month. Including Disney+, Hulu, and ESPN+, this is a worthy if not possibly superior opponent and challenger to the industry leader.

With that, Netflix spoke ahead of earnings on entering the streaming gaming arena, taking on a whole new host of competitors. The new subs, the guidance, and what Hastings says about gaming will matter more than performance tonight.

Brilliant or desperate? I don't know yet. If the stock does sell off, I stand to profit, but in an under-control way. If the name rallies, I will lose small. In the game? Yes. Playing for keeps? No way.

(AAPL and NVDA are holdings in Jim Cramer's Action Alerts PLUS member club. Want to be alerted before Jim Cramer buys or sells these stocks? Learn more now.)

Get an email alert each time I write an article for Real Money. Click the "+Follow" next to my byline to this article.
TAGS: Earnings | Futures | Investing | Markets | Small Cap | Stocks | Trading | Treasury Bonds | U.S. Equity | Coronavirus

Step Into Action With Caleres

The Indexes Finally Crack as the Bear Market Progresses

All eyes will be on bond yields once again.

Everyone wants a flush in the market, but here's why they aren't getting one.