The first thing you might notice when you look at the charts of the Overbought/Oversold Oscillator Wednesday is that the New York Stock Exchange ticked up, while Nasdaq did not. I wouldn't make too much of a fuss over this, but it just shows us how much less oversold Nasdaq is, or was, than the NYSE.

Then there is sentiment. The market rallied and folks seemed non-plussed as the put/call ratio stayed elevated at .85. The 10-day moving average hasn't moved much at all, but typically after a rally such as we had we'd at least see the put/call ratio dip into the 70s, but that was not the case on Wednesday.

Then there is the Investors Intelligence survey. One reason I like this survey so much is because it tends to be slow moving; it doesn't jump and jerk around as much at the American Association of Individual Investors (AAII) does. This week the bulls fell back to 50%, which is where we saw them in late August near the lows.

If the market were to pullback in the next few days, I would expect this to fall into the 40s for next week's reading and that would be something we haven't seen since spring of 2020. So this goes on the positive side of the ledger. 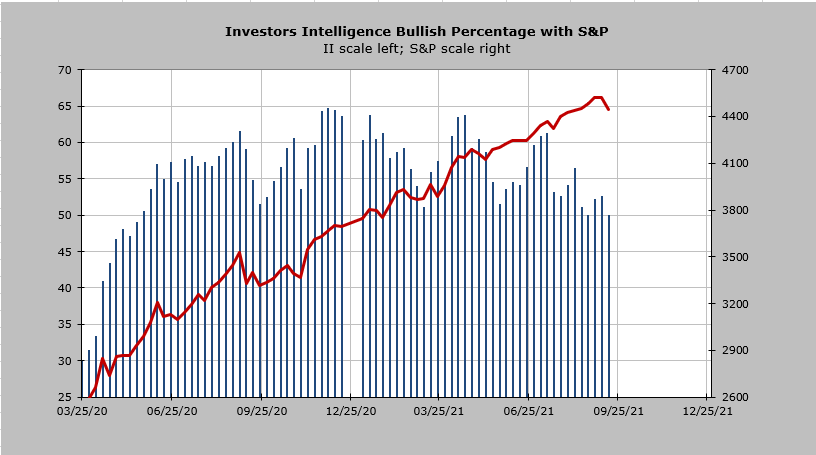 It's not just bulls, though. The bears are at 22.1%. I know that is still low, but look at the chart: The last time the bears were this high they were 23.2% in the fall of 2020. My takeaway is that this summer has taken its toll on folks. They have eased up on the bullishness and notched up the bearishness. While neither reading is extreme, they would both fall on the positive side of the ledger (for the market).

So can the market pull back in the coming days? Sure, why not? But if it does, I would say the same thing I have said all week: It would simply lead to an oversold condition for next week.

Note: Thursday is Yom Kippur, a holiday I observe. For that reason there will be no column on Friday. For those who observe, have an easy fast.