Wednesday evening, shortly after closing bells chime at both 11 Wall Street and up at Times Square, Slack Technologies (WORK) , only publicly traded since mid-June, will release its fiscal second-quarter financial results.

The shares have not performed well since the IPO. You may recall that the stock traded as high as $42 that day after a reference price of $26 had been set for its direct listing at the New York Stock Exchange.

Funny thing I have heard as this stock has worked its way back to levels fairly close to that reference point: Slack is a "buy", but at the right price. My friends, every stock, bond, lot of land, piece of jewelry, piece of artwork, etc. is a buy at the right price. Ever. There, that's finally off my chest.

Slack has experienced extraordinary revenue growth over several years. For the uninitiated, the company provides a software-as-a-service (Saas) instant messaging and collaboration system.

My own experience? I am old. I prefer to work on projects as a team in person. Late in my career, I worked for a firm based in India. As that firm's sole representative in New York, this was no longer an option.

This is 2019. The kind of office set-up that I grew up in, no longer exists. I have used both Slack and chief competitor Microsoft MSFT professionally. I prefer Microsoft, but I know many prefer Slack.

There is clearly a need for such a service. Yet, that meteoric rise in revenue generation already mentioned has clearly slowed, not just for Slack, but for the cloud more broadly.

For the July quarter, Slack is expected to report a loss of $0.18 per share on revenue of $140.7 million. These numbers, if realized, would be down from the loss of $0.06 per share for the same period last year on revenue growth of 52.9%.

The sales growth seems lofty, yet consider that this rate will be next in a series of potential prints starting at 82%, then 78%, then 67% to complete a full year. Going back to 2017, revenue growth ran in six figures. Cause for worry? I am not sure. Valuation in this environment could be problematic.

Slack's own prior guidance, if left unchanged, for the full year is for revenue growth in a range spanning from 47% to 50%. An updated prospectus released prior to the company's listing showed a decline in paid user growth. That specific item will be focused upon by investors.

My instinct tells me to watch this one.

All who follow me know that I have been a supporter of cloud stocks. Several of those turned out very well. Some of those names have turned into exercises in risk management.

My exposure to the space is far smaller than it was several months ago. Part of that admittedly is due to my recent vacation, as I normally reduce risk when I expect to be less focused. However, that does not mean that I am willing to rush a reduction in dry powder (also known as my cash position) just to get fully invested. 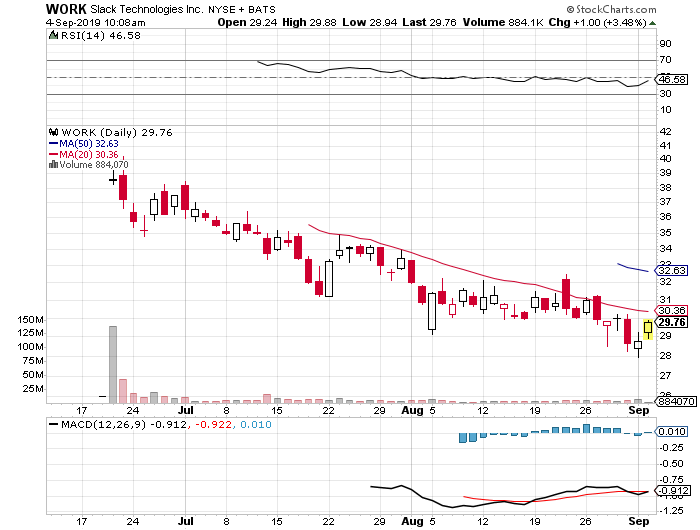 Short term, the shares are benefiting from a stabilized reading for Relative Strength. And daily Moving Average Convergence Divergence (MACD) appears poised for a positive turn. Yet, all three components of that MACD (9, 12, and 26-day exponential moving averages) reside in negative territory. That does cause this trader to take a cautious approach.

Given the short duration of Slack's life as a public company I have taken the liberty of moving the 50-day simple moving average to a level of significance that I usually reserve for the 200-day, and have replaced the 50-day SMA with a 20-day SMA.

Traders will quickly spot the 20-day. This line has presented as nearly impenetrable resistance since it became visible in mid-July. The algorithms that trade this name see that too.

With the 50-day just $2 above that spot, there are two levels in the neighborhood that could slow down any attempt by the bulls to take control. WORK trades at 33 times trailing sales, not earnings, and at 24 times its current sales guidance.

For reference, Zuora (ZUO) , a cloud name admittedly in a different business that I have been high on, and that also struggles, trades at just 5 times trailing sales.

I could be wrong, but this name is still a spec play until they prove different.

The shares are trading higher going into the numbers. As a trader, I prefer to see my longs not behave that way, but that's just me.

A trader interested in Slack, but also interested in limiting exposure, could (in minimal lots) sell one $27 WORK put expiring on Sept. 20 for roughly $1.10. If the shares trade higher, the trader pockets $110. If the shares collapse, the trader would be on the hook for 100 shares in two weeks at a net basis of $25.90, below the original reference price, which could possibly end up being support.

Get an email alert each time I write an article for Real Money. Click the "+Follow" next to my byline to this article.
TAGS: IPOs | Investing | Put Call | Stocks | Technical Analysis | Trading | Software & Services | Stock of the Day | Earnings Preview