The latest on Twitter: If you are shorting the Dow -- the Dow! -- when it is over 27,000, then you are nuts. I saw someone post the statement, and then a whole bunch of people jumped on board, noting how dumb it was to short the Dow when it's over 27,000.

I much prefer looking at the indicators rather than absolute levels of the indexes, but I decided to take a look at the Dow. And lo and behold, it has been over 27,000 twice this year, never for longer than a few weeks, and each time it actually paid to short it.

I don't know the basis for this person's view, but it seems to me all one would have to do is look at the chart to see it was a profitable trade if you did that.

I also saw several folks rationalizing the Dow on Thursday, because IBM (IBM) was down so much. Yet, I did not see one of these folks note that the decline in IBM was pretty much offset by the rise in United Health (UNH) . Rationalizing an indicator is a slippery slope, and one I choose not to venture down. But it does show us that sentiment is shifting.

Breadth was terrific on Thursday -- in fact it was the best breadth reading we have had all week. Oh sure, most stocks were up marginally, but that would be rationalizing the indicator. Good breadth is good breadth, and it is bullish when the cumulative advance/decline line makes a new high.

Better breadth has also helped the McClellan Summation Index rise a bit more. That, too, is a plus.

And the number of stocks making new highs increased for both the New York Stock Exchange and Nasdaq. Sure, they are still far below the prior peaks, but this is the best reading for both since the rally began.

Overbought by Next Week

My own Oscillator will be overbought midweek next week.

But it is the Nasdaq Momentum Indicator that has captured my attention. What I do here is plug in higher closes for Nasdaq over the course of the next two weeks. I am trying to determine the day that the price keeps rising but the indicator goes down. That happened on Thursday. But if Nasdaq keeps going and I plug in 200 points worth of higher closes going forward, the indicator peaks after Monday's trading. You can see it on the charts below.

In terms of sentiment, I still don't see a solid change, just a shift. The bulls and bears continue to fight it out, but the bears are shuffling over to the bull camp. Just look at this week's American Association of Individual Investors' weekly survey showing a 13 point jump in bulls. 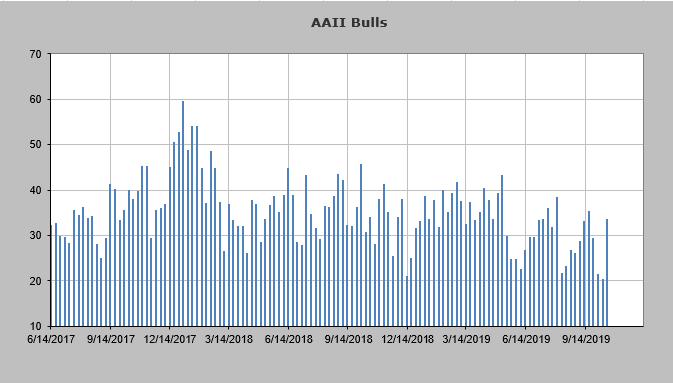 The 10-day moving average of the put/call ratio is falling, but it's not enough to fuss or show any complacency yet. So the mixed indicators continue.

Get an email alert each time I write an article for Real Money. Click the "+Follow" next to my byline to this article.
TAGS: Earnings | Investing | Stocks | Technical Analysis | VIX |