By STEPHEN GUILFOYLE Jun 23, 2022 | 10:00 AM EDT
Stocks quotes in this article: TSLA, MS
The interview was filmed on May 31. That probably sheds some light on Tesla ( TSLA) CEO Elon Musk's statements in the days that followed concerning the coming reduction in payroll. Bloomberg News reported earlier this week that these reductions are expected to impact 10% of Tesla's global salaried workforce and 3.5% of its total global workforce.
Musk sat down for Tesla Owners Silicon Valley, which is a club for Tesla owners on May 31, and said, "Both Berlin and Austin factories are gigantic money furnaces right now." Musk added, "It's really like a giant roaring sound, which is the sound of money on fire. Bigger than a dumpster, a dumpster's too small." The club posted the interview online on Wednesday.
Separately, Tesla announced plans to suspend most production at the company's Shanghai facility for the first two weeks of July in order to upgrade the plant with a goal to produce 22K cars per week. This came after a two-month-long Covid-related lockdown in Shanghai had forced tesla to delay plans to reach certain production levels.

In response to the above bevy of headlines, Morgan Stanley's ( MS) five star (rated by TipRanks) analyst Adam Jonas updated his forecast for second-quarter deliveries to 270K vehicles, down from 316K, which took his full-year projection down to 1.39M from 1.425M. Jonas sees Q2 automotive gross margin dropping to 24.6% from the prior estimate of 25.8%.
For the full year, Jonas sees automotive gross margin at 26.5%, which is a reduction from his previously anticipated 26.8%. Jonas, who is a Tesla bull, maintained his "overweight" rating on the stock, but did reduce his price target to $1,200 from $1,300.

Way back (not so long ago) in early June, I suggested that Tesla could potentially be incrementally bought, with the stipulation that the shares had to take the 21-day exponential moving average (EMA) at the time.
The shares pierced that line on June 9, but failed to hold it. TSLA has traded above the 21-day EMA both on Tuesday and Wednesday. It hasn't really held, but it still could.
The stock was trading around $701.55 when I wrote that story, and the shares traded as high as $766.64 and as low as $626.08 since. TSLA closed at $708.26 Wednesday night and is poised to open above that 21-day EMA (now $710.10) on Thursday's opening bell.
The whole EV space is trading a bit higher as rumors spread concerning the Chinese government extending existing subsidies past 2022.
Have I changed my mind? Maybe not long-term, but what about the short to medium term? 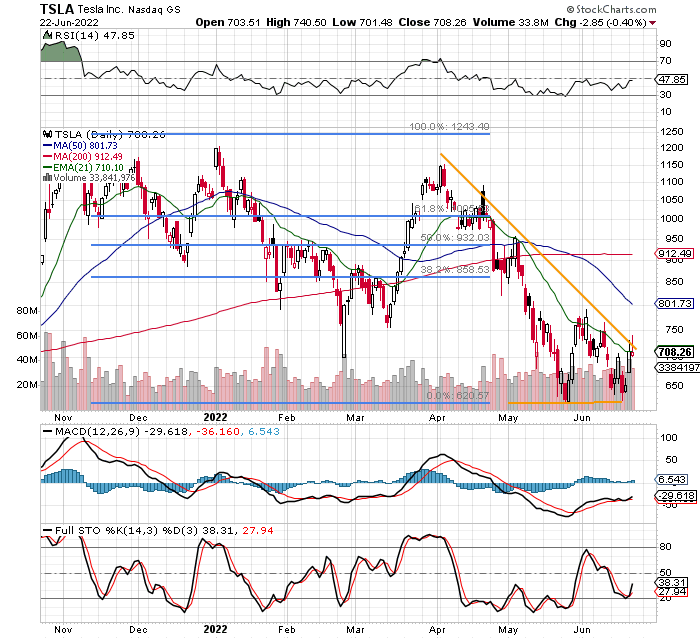 The Fibonacci setup that I showed you on June 6 is still good. Relative Strength has improved, as have the Full Stochastics Oscillator and the daily Moving Average Convergence Divergence (MACD), though none of these three indicators is truly strong.
Readers will see that I have drawn in orange what looks to me to be a "descending triangle." Tesla has suffered a series of lower highs beginning in early April and running right through the present, while support established last July has re-emerged.
The stock is on the verge of potentially breaking out. That said, if Tesla fails at pivot, as it has on every single attempt to break out for about a month now, that support is a good $80+ to the south. Could get a nice run lower here.
Obviously, this is a trade idea, and not a position. I don't expect to hold this idea for very long, and will be quick to exit if I smell trouble.

-- Sell Short 100 shares of TSLA at or close to the pre-opening last sale of $716.
-- Sell one TSLA June 24 $695 put for $10+.
Panic Point: $740 (Wednesday's high).
Note 1: Selling the put increases net basis to $726, while limiting profitability to a max of $31. That would be a net profit of 4.3% for one day's work.
Note 2: Trader could purchase one TSLA call expiring June 24 at any level in order to limit potential loss. Of course, premium paid comes directly out of net basis.
Get an email alert each time I write an article for Real Money. Click the "+Follow" next to my byline to this article.
TAGS: Short-selling | Investing | Markets | Politics | Stocks | Trading | U.S. Equity | Elon Musk | Electric Vehicles

This quartet of stocks includes a boat retailer, an underwear maker, a department store chain and an entertainment giant.

Possibly, as a number of Big Blue's technical signals are bullish.