At certain times, indicators will mostly lean the same way. For example, in late September we were short-term oversold. We were intermediate term oversold. Sentiment was extreme on the bearish end of things. There were even fewer stocks making new lows.

But you know what we did not see? In fact it is something we have not seen much of all year: a jumpy CBOE Volatility Index. When I look at the chart of the VIX and there are only perhaps three times I can say the VIX got jumpy this year in the manner we are used to. That would be late January, late February and early May. All other times the VIX has been quite subdued.

Remember all those folks begging for a VIX at 40? The closest we got was 38 in January. Yes January, well before anyone was calling for a VIX over 40.

Now we find the VIX at 23. I am going to take the view that I would like to see the VIX push down under 22 (the low from two weeks ago). As you know I think complacency is already high and rising, although last week's chop-fest did a bit to dispel that chorus of 'year-end rally' songs that we heard for most of this month.

Look at the 21-day moving average of the put/call ratio for the VIX. It is now lower (by a hair) than it was in February 2020. I know many will focus on that date and get concerned but rather let's just focus on the level. This indicator tends to bottom in this area. Not all readings down here lead to March 2020 type declines. In fact, not all low readings lead to anything major in terms of declines. But as you can see it is getting close to the lower end of its range. 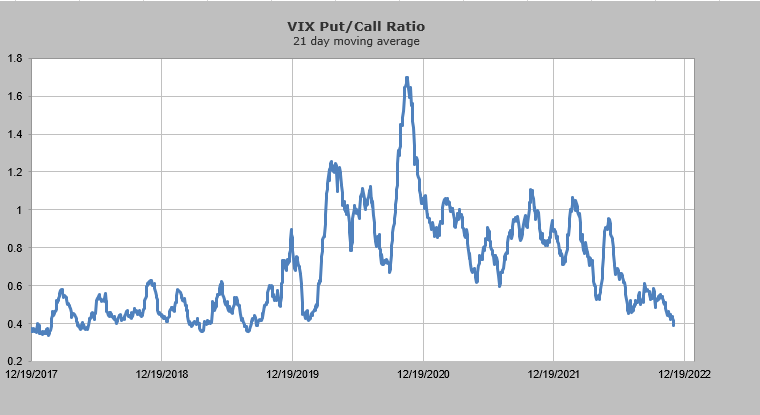 I have been keeping this data since 2006 and the lowest reading I have is from March 2007 and July 2008. But we haven't seen readings with a two handle since that period of time. What does all of this mean? It means there has been persistently low readings for this put/call ratio. Far more folks betting on a higher VIX for quite some time. Just as everyone stopped calling for a VIX over 40.

So why is it I want to see the actual VIX lower? Because the Daily Sentiment Index (DSI) for the VIX is currently 25, which is the lowest since early September. Recall in early August this indicator got to just shy of single digits-it was a tween! If the VIX falls a bit more (often associated with a rally in stocks) I suspect the DSI will fall into the teens.

And that, along with the upcoming intermediate term overbought reading, would signal more volatility coming in December, something I don't think folks are currently prepared for. This holiday shortened week has a tendency to see some upside in stocks so let's see if that comes to pass.