So we have inflation. Please raise your hand if you didn't know that already from just going to the grocery store or filling your tank with gas. But it does seem as though the bonds were a little surprised as they really did see yields rise right from support just as everyone "realized" rates were lower.

Markets love to shake folks out. Markets will do what they can to make the majority wrong. They love to make fools of us all. I know, because I have been made a fool of many times in my career.

In any event, we have now confirmed that this blue line is a good line, so if it breaks we should care. The bond market is closed on Thursday for Veteran's Day, so at least we should see some calm from that part of the market.

The other situation we had on Wednesday was that the market seemed to go back to the playbook from the first half of the year. By that I mean interest rates up and tech/growth stocks go down. That correlation had begun to break down the last few months. So let's talk about the Invesco QQQ (QQQ) .

We can tell folks got concerned about the mega-cap tech stocks/growth stocks because the QQQs were down hard, but also because volume rose to around 55 million shares. That is not extreme (extreme to me is over 70 million) but the last few days it has started to lift.

I point this out, because to me high volume selloffs in the QQQs have a tendency to lead to a rally. I have shown that on the chart below with blue boxes. If we see a high volume down day sometime in the next several days that would be one sign the shakeout is nearing the end. 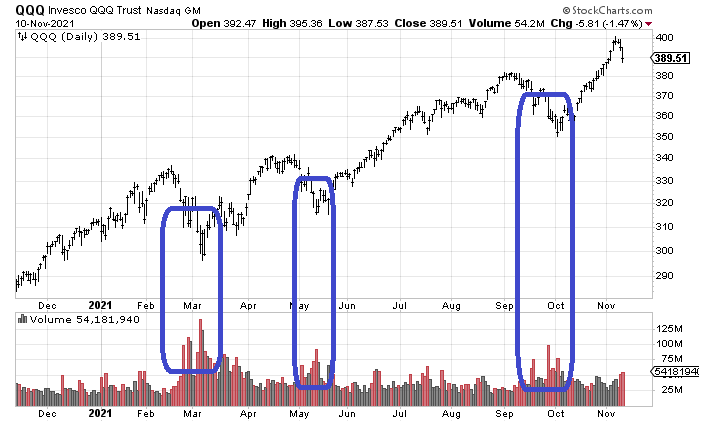 The Investors Intelligence bulls did climb to 56.5%, so they are now in a yellow zone (over 60% is red). But since they are several days "old" when reported (and why they are best used as an intermediate term indicator) I doubt we will see them climb much more next week. And, they should in fact turn south.

The put/call ratio did, however, climb to .87, which is the highest in two weeks. The Daily Sentiment Index (DSI), which got to 93 a week ago for the S&P and Nasdaq has come down quite a bit with the S&P at 73 and Nasdaq at 61. So, the correction is doing what it is supposed to do in terms of sentiment. 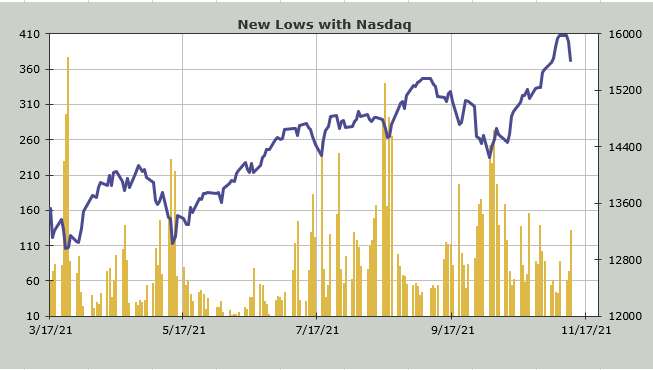 Breadth was not great, but it was not as bad as it could have been. It did manage to halt the rise in the McClellan Summation Index, but did not roll it over. The number of stocks making new lows on Nasdaq did expand quite a bit though and they outnumbered new highs. That needs to be watched closely, because as I have said for a while now, if breadth stays healthy then I will stay positive. If breadth turns sour then I will get more cautious.

Get an email alert each time I write an article for Real Money. Click the "+Follow" next to my byline to this article.
TAGS: Investing | Stocks | Technical Analysis | Treasury Bonds |