You Decide... Rats off a Sinking Ship? Or is it Opportunity?

On Wednesday, Meta Platforms (FB) Chief Operating Officer Sheryl Sandberg made public her intentions to leave that position. In a post on her Facebook page, Sandberg announced that she would continue to serve as a board member, but was looking forward to spending more time on her foundation and on women's issues. According to the Wall Street Journal, Sandberg had been telling associates of late that she had felt burned out and that she had become a "punching bag" for the company.

That much is certainly true. While Sandberg, as CEO Mark Zuckerberg's number two, had been the driving force behind the firm's monetization of its social media sites through the sale of advertising, the firm had also been dragged through the public mud in the wake of the Cambridge Analytica scandal, the Russian disinformation campaigns, and the proliferation of not just misinformation, but hate speech on the sites. Selling pinpoint advertising for a premium also became far more difficult to do, once Apple (AAPL) gave smartphone users the option to avoid being tracked by users of apps such as Facebook.

Facebook, now Meta Platforms, suffered reputationally as a firm, as did management to include Sandberg. Still, according to corporate filings, Sandberg received $35.2M in total comp for 2021, and owned roughly 1.5M shares of FB (soon to be META), which at Wednesday night's closing price was worth $277M. She is worth an estimated $1.6B.

However, with the firm still under Zuckerberg's leadership pivoting away from the sale of advertising as its primary focus and turning toward the development of virtual environments that the firm and most of the business world refers to as the "metaverse". This metaverse, or omniverse as it is also known, will be less dependent on selling advertising in order to drive revenue. While Sandberg was and is a key part of the firm's past and present, that had set the stage for her expertise, possibly being less key to the firm's future.

Sandberg follows David Marcus, who was head of the firm's financial arm, and David Fischer, who was chief revenue officer, out the door. Current Chief Growth Officer Javier Olivan, who is also a longtime employee will ascend to the COO position. Chief Business Officer Marne Levine will report to Olivan.

The Facebook site and family of sites metrics showed pedestrian to modest growth across most metrics. The firm guided toward Q2 2022 revenue of $28B to $30B at that time, while reducing its outlook for full year 2022 total expenses from $90B to $95B down to $87B to $82B. The firm also reiterated its expectation for $29B to $34B in full year capital expenditures.

Meta Platforms will report its second quarter in late July. Wall Street consensus is for EPS of $2.65 on revenue of $29.3B. Those numbers, if realized, would amount to earnings "growth" of -26.6% on revenue growth of 5%. A couple of things are certain. Facebook, or Meta Platforms, is a profitable business, but far less profitable than it was a couple of years back, and Meta can in no way... be considered a "growth stock."

Meta produced free cash flow of $3.17 per share for the first quarter, a solid number for sure, but the weakest of the past three quarters. This left the balance sheet with a net cash position of $43.89B. Great? Yes, but the lowest number for FB in terms of cash for years. Receivables were also lower, dragging current assets down to $59.265B. This was the fourth successive sequential quarterly decrease in current assets for the firm. Current liabilities add up to $21.086B. Despite the obvious erosion on the asset side, FB still runs with a current ratio of 2.81, which is super healthy.

Total assets amount to $164.218B, including $20.833B in "goodwill" and other intangibles. Total liabilities less equity come to $40.99B, with no significant entries for long-term debt. The firm is flat-out healthy. This balance sheet passes every Sarge test I have with flying colors. FB's tangible book value decreased to a still impressive $37.73 per share in March, which was the lowest print for this metric since the September quarter of 2020. 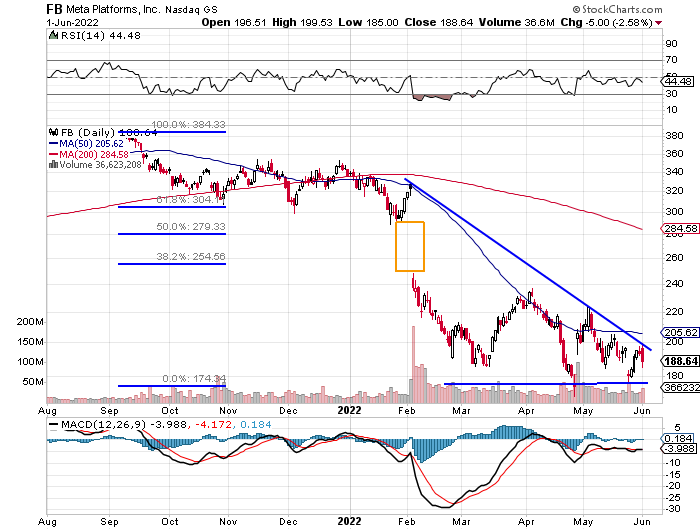 Two items jump out at me on this chart. One is the obvious "descending triangle", which is a bearish pattern, Second, is that the shares found support in February after gapping lower earlier in the month, and more or less have held that support line for three plus months. Who wins? If only it were that easy.

I traded this name last night after the close once I saw the Sandberg news. I bought the shares at $186, and sold them at $189 when I got hungry. I was not willing to hold the shares overnight, even though I saw this news as potentially positive, just in case someone else followed Sandberg's lead. It looks like the shares have not moved much since taking my leave.

Is Meta Platforms an investable stock? Yes, based on the fundamentals, certainly. Understand though that this is a company in transition trying to do something that they (and nobody else either) have ever done successfully before. It would make this decision easier if FB just paid a dividend, and a nice one too. Until there is a metaverse and we find out if this firm is indeed a key player in a profitable way, this firm is a social media play. Social media as an industry in 2022 has more in common with the Utilities sector (widely used, slow growth, steady profitability) than it does with let's say, the rest of the Tech or Communications sectors.

I believe one can invest here, but I would not pay up. A smallish entry in the $180's is enough for me for a firm that wants to shift its focus and is not willing to pay shareholders for their patience.

Get an email alert each time I write an article for Real Money. Click the "+Follow" next to my byline to this article.
TAGS: Earnings | Investing | Stocks | Technical Analysis | Trading | Media