Back in August and September one of the leaders of the SPAC craze was a stock called Tortoise Acquisition Corp. (SHLL) . Well, SHLL was merged to form a new entity called Hyliion Holdings  (HYLN) but as soon as the deal was done the stock fell sharply due in part to a flood of shares that were not locked up when the transaction closed -- and also due to shorts that were emboldened due to the blow-up of Nikola (NKLA) .

Hyliion's main product is hybrid electric and gas powertrains used on large trucks. There are two main designs -- a hybrid system that can be retrofitted into existing diesel trucks and its Hypertruck ERX system, which is an all-electric drive train system. The hybrid system has already been sold and is used by Ryder Trucks R among others.

Hyliion's powertrain solutions "are designed to significantly reduce greenhouse gas (GHG) emissions and total cost of ownership, which enables customers to meet both their sustainability and financial objectives."

HYLN stock has been more than cut in half from its highs but seems to have found support in the lower $20s and is now turning up. The first hurdle of resistance is around $25. There is also a fairly large short position that could provide some fuel for a squeeze.

Stocks that have been momentum favorites in the past often attract interest quite quickly when they resume their upward movement. I'm long and looking to add to my position. 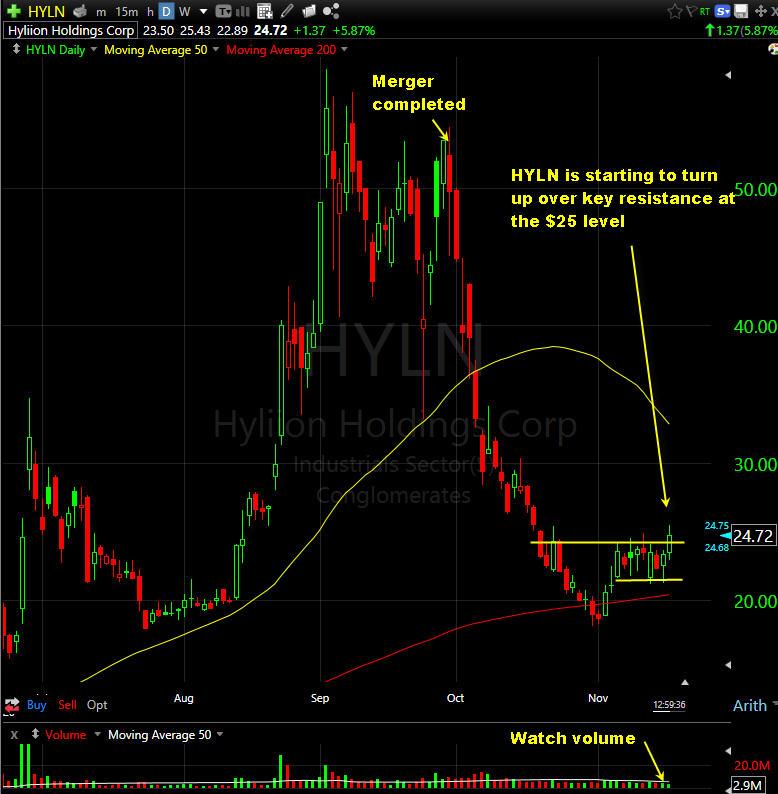 Get an email alert each time I write an article for Real Money. Click the "+Follow" next to my byline to this article.
TAGS: Short-selling | Investing | Markets | Small Cap | Stocks | Trading

These D+ rated names are displaying both quantitative and technical deterioration.

Are they trying to tap the brakes or is this an admission that they cannot tap the brakes and must do more of the same to make sure risk taking accelerates to ludicrous speed?