Surface Oncology (SURF) is a small biotechnology company focused on the development of drugs for cancer therapies. In scientific terms, the company focuses on "enhancing the innate and adaptive immune responses."

Last November, the company received FDA Fast Track designation for SRF388 for the treatment of patients with hepatocellular carcinoma or liver cancer. A clinical update is expected in April at the American Association For Cancer Research Virtual Annual Meeting.

An analyst at Wedbush recently reiterated his "outperform" rating on the stock with an $18 price target as he sees this update as an "upcoming inflection point." He believes the shares offer a "highly favorable risk/reward profile" ahead of the readouts.

This catalyst looks promising, but another interesting aspect of the stock is that as of March 18, the ARK Genomic Revolution ETF (ARKG) owned over 4 million shares of Surface, which is a bit less than 10% of the company. ARK updates its transactions each night and has been a consistent buyer of Surface recently while selling down other positions as it has dealt with a sharp correction. ARK has made it clear that it intends to continue to buy its "best ideas," and given the recent buys, SURF seems to fall within that category.

A third positive aspect is that the chart appears to be finding support after selling off in tandem with the biotechnology group since the top earlier this year. The stock has formed an inverse head-and-shoulders pattern and is working to move through the downtrend line.

The combination of the upcoming data, combined with the interest of ARKG, and an improving chart pattern has me accumulating shares. 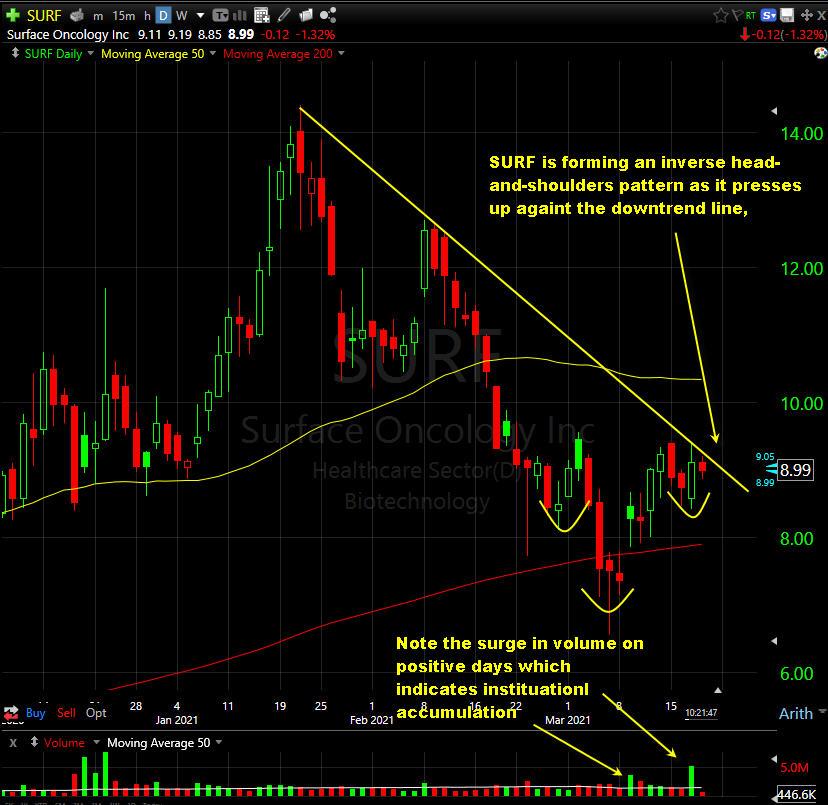 Get an email alert each time I write an article for Real Money. Click the "+Follow" next to my byline to this article.
TAGS: ETFs | Investing | Small Cap | Stocks | Trading | Biotechnology