Golden Nugget is an online gaming company with two core segments: sports betting and an online casino. It is the first company to have online, live dealers and a live casino floor in the United States.

Unlike other online gambling plays, GNOG's primary focus has been on growing the iCasino business rather than sports betting. This has led to favorable customer acquisition and cross-selling opportunities. iCasino customers are generally more profitable than standalone sportsbook customers. The main driver of GNOG's longer-term success will be its ability to acquire casino customers in a different manner than its competition such as DraftKings (DKNG) , FanDuel, and Penn National (PENN) (which owns Barstool Sports).

Since online gambling laws were changed in 2018, 26 states have legalized sports betting, and 16 have legalized online sports betting. GNOG has been operating as an "iCasino" in New Jersey since 2013, where it maintains an 8% share of the most advanced gaming market in the U.S. outside Las Vegas. The company has also now launched in Michigan, Pennsylvania, and West Virginia and has acquired rights in Illinois, Louisiana, Nevada, and Mississippi.

Thomas Winter, President of GNOG, stated, "We are thrilled to be live in Michigan and are optimistic on the revenue opportunity. We have just launched our marketing campaign and are already recording close to $2 million dollars in daily casino wagers. Michigan is embracing online gaming at a rapid pace, and we anticipate that our business in the Great Lakes State will exceed our earlier expectations."

On Feb. 24, GNOG announced an agreement with Tioga Downs, which will allow it to operate online casino wagering under the Tioga license in New York. Tioga is one of seven commercial and tribal casinos in New York. It is believed that the online casino market in New York will reach $2 billion.

The final fourth-quarter 2020 report should be released soon.

GNOG currently has the lowest valuation in the U.S. iGaming space. It is trading at around 6.4 times estimated 2022 revenue, which compares very favorably to DraftKings, which trades near 20x.

What makes GNOG particularly interesting right now is that it has recently called its warrants. Warrant owners must exercise their warrants by Monday, March 8, by 5 p.m. ET, or they will be liquidated. There are nearly 5.9 million public warrants, which are being called, and an additional 10.541 million private warrants, which are not being called.

When warrants are called, this often results in additional selling pressure because those that hold the warrants do not want to add additional capital to their existing position. Rather than add capital to their investment, they will be inclined to sell the excess shares they now hold. This is well anticipated and probably one of the reasons that GNOG has been under pressure since announcing it was calling public warrants on Feb. 4.

I'm looking for the overhang from the warrant redemption to remove pressure and for the stock to find better support. In addition to the relief of selling pressure caused by warrant redemptions, it is likely that some of the $1.9 trillion stimulus bill will eventually find its way into online gaming and further benefit the stock.

The chart, below, is unattractive right now, but there is some nearby support around $13. The stock needs to take out the downtrend line and cut through some overhead resistance to gain some momentum. 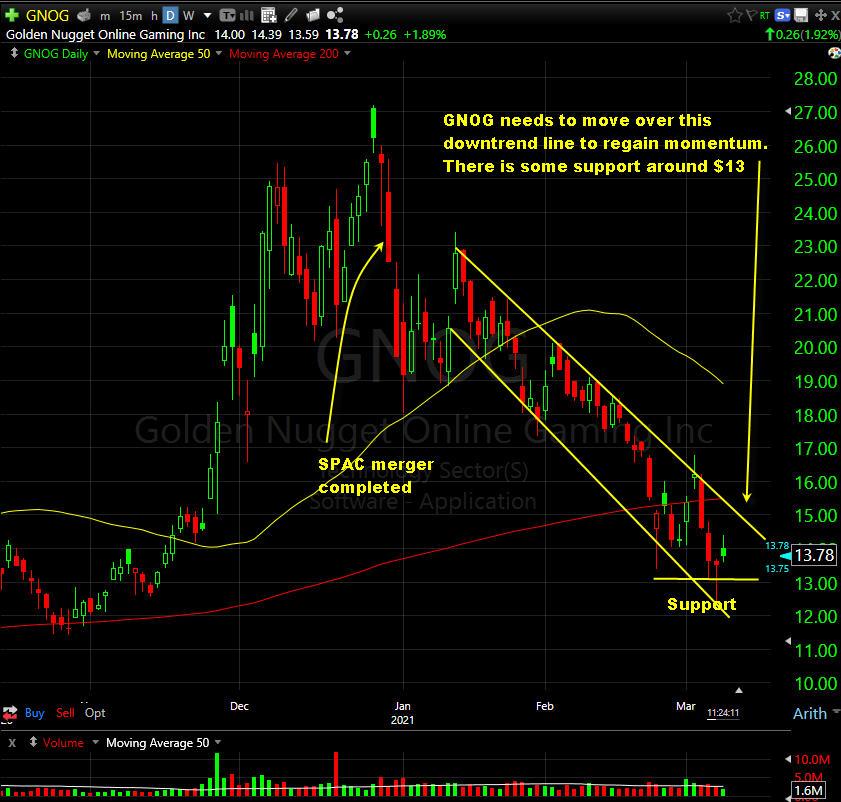 Get an email alert each time I write an article for Real Money. Click the "+Follow" next to my byline to this article.
TAGS: Investing | Markets | Small Cap | Stocks | Trading | Gaming