The trading action is presenting a dilemma for many market players who are trying to stay in sync with the price action. The very broad strength seems to indicate that there will be a clear and positive outcome to the election but there isn't nearly enough factual information to confirm that theory. The potential that the market has it wrong and that some troubles await is very high but who are you going to believe, the DJIA or your gut?

Typically, I'm inclined to stay with strong momentum like this, however, making new buys in front of the looming news doesn't strike me as a good way to control risk. While it is possible the market keeps running as it deals with election results, the potential for less clarity is not insignificant.

We are already seeing the indices cool off as the day progresses.

My game plan at this point is to simply manage positions and wait for new setups to develop. While I have no interest in chasing buys right now, I suspect we will see some good entries in post-election volatility.

One name on my radar today is Beam Global (BEEM) . Beam Global produces technology for electric vehicle (EV) charging, outdoor media, and energy security. Its products are based on its patented EV ARC and Solar Tree lines and include BeamTrak patented solar tracking and ARC Technology energy storage, along with EV charging, outdoor media, and disaster preparedness packages.

On October 21 the company announced a collaboration with the City of San Diego to deploy solar-powered EV charging infrastructure across the city. It was a first-of-its-kind deal and is a model for future partnerships. 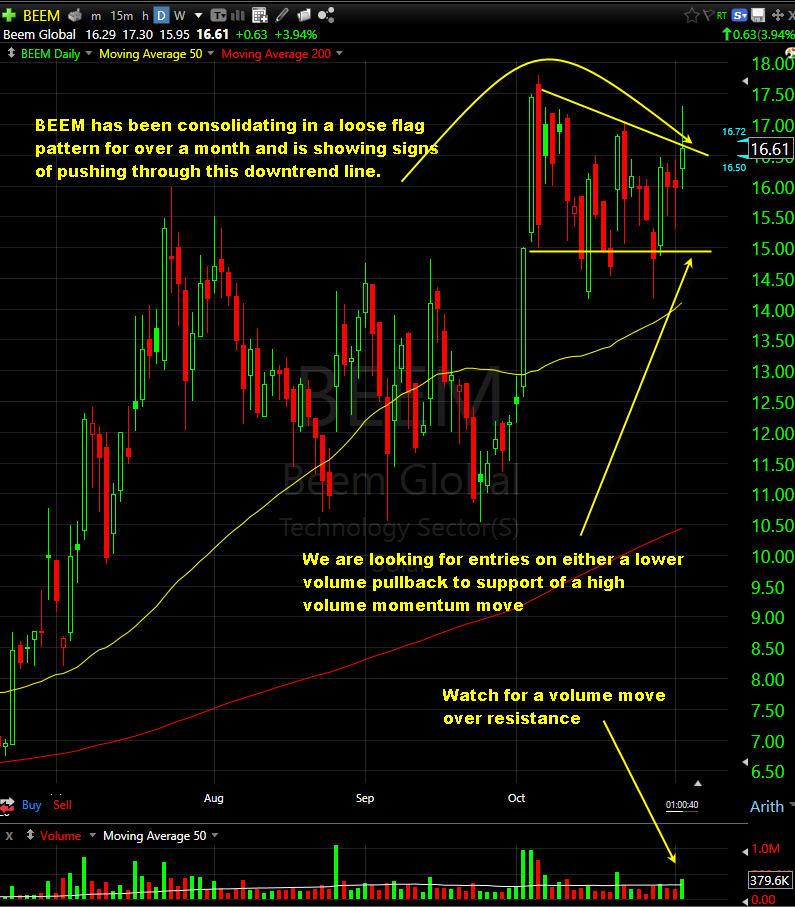 BEEM started to push higher on increased volume in July after being added to the FTSE Russell Microcap Index and saw a big volume spike in late August after BTIG initiated coverage with a "Buy" rating and a $25 target.

The shares spent August and September digesting the July move, but caught a momentum wave in early October, pushing to fresh highs on a two-day volume spike. Since then, BEEM has been flagging off highs and I am looking for a trend continuation. As such, we'd look for an entry between $15.80-16.80, with an initial stop around the 50-day moving average or so.

Please note that due to factors including low market capitalization and/or insufficient public float, we consider BEEM to be a small-cap stock. You should be aware that such stocks are subject to more risk than stocks of larger companies, including greater volatility, lower liquidity and less publicly available information, and that postings such as this one can have an effect on their stock prices.

Get an email alert each time I write an article for Real Money. Click the "+Follow" next to my byline to this article.
TAGS: Investing | Markets | Politics | Small Cap | Stocks | Technical Analysis | Trading | U.S. Equity