If you are an active trader, you have probably had the unfortunate experience of having one of your trades hit with a surprise secondary offering. These offers often occur when there is good news or a strong chart and can be quite discouraging as they kill what are good-looking technical setups.

I had this happen to me Tuesday after spending the day building up a position in Hut 8 Mining (HUT) . Based in Alberta, Canada, Hut 8 is a cryptocurrency miner offering favorable pricing on energy, which is critical to crypto mining. It mines not only bitcoin but has diversified into ethereum.

If bitcoin and etherium continue higher in the months ahead, then there is little doubt, in my view, that HUT will do quite well as well. I still like the trade, but the question is, how do you deal with this sort of setback when a good-looking trade now looks technically poor.

Hut8 is pricing its secondary offering at $8.55. That pricing basically renders the chart setup that was in place at the close on Tuesday irrelevant. My approach is to use a mark-to-market approach. I will now ignore my original cost basis and treat the stock as if I bought all my shares at the secondary pricing at $8.55. That is the only technical level that is meaningful at this point.

The key here is to reset your thinking. Many holders of HUT are likely disgusted by the negative surprise, and they will dump the stock and move on. They don't want the emotional cost of this failed setup to negatively impact them, so they take it off their screens.

While that is an understandable approach from an unemotional standpoint, the stock now has a very obvious support level, and nothing has changed fundamentally. The $150 million offering is fairly small for a stock with a market cap of around $1 billion. And nothing has changed as far as bitcoin or ethereum, which are acting well right now.

I've added HUT shares today as the stock tests the secondary pricing level and will look for further entries as it holds. The shares have had a tendency toward late-day strength, and I expect to see more buyers step up as HUT holds pricing and tests the highs of the day.

It is annoying to have a good setup be ruined by a secondary offering, but the best approach is to look for the opportunity in the disaster rather than dwell too much on what has already occurred. 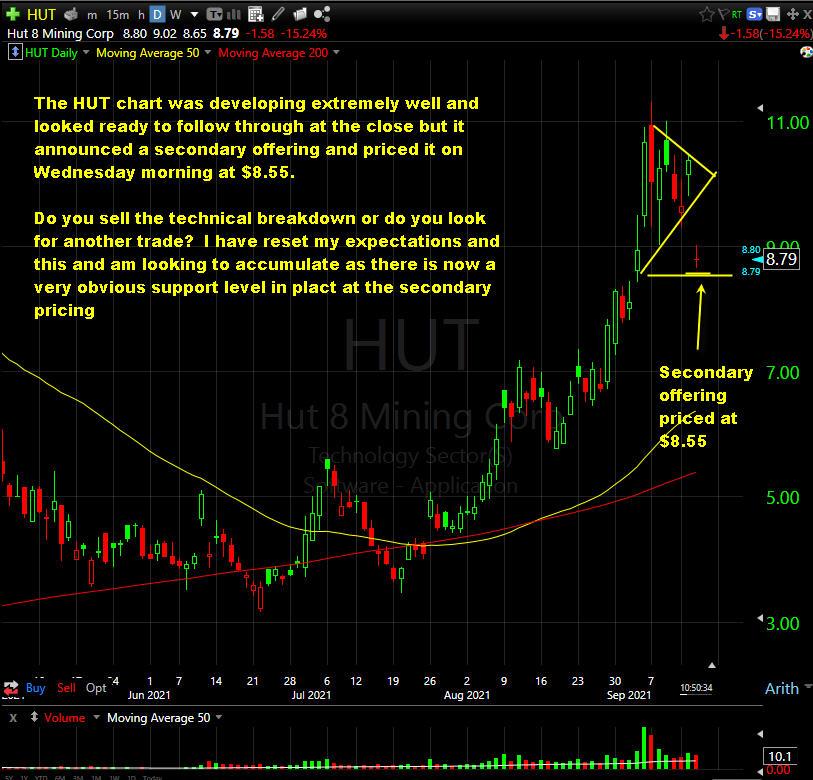 Get an email alert each time I write an article for Real Money. Click the "+Follow" next to my byline to this article.
TAGS: Bitcoin | Investing | Small Cap | Stocks | Trading | U.S. Equity | Cryptocurrency