One approach to growth investing is to identify a theme like cloud computing, genomic biotechnology, financial technology, etc., and then look for the best names within those groups of stocks.

Recently, I've been taking a hard look at names that are "space" related. There are space tourism stocks such as Virgin Galactic (SPCE) , communications names like AST SpaceMobile (ASTS) , and imaging and data companies like BlackSky Technology  (BKSY) .

Most of these stocks are early stage and will not see much revenue for a while, but I believe one of the better plays in the group is Redwire Corp.  (RDW) . Redwire is a space infrastructure company based in Florida. It sells the things that other companies need in this area. It can service all types of space missions and should grow along with the overall space economy.

Unlike other space-related stocks, Redwire is already cash-flow positive and has estimated 2021 revenue of $163 million. Its enterprise value of just $600 million is substantially less than others in this group.

What is particularly interesting about the stock is that Amazon (AMZN) has been working on something called Project Kuiper. The goal of this project is to launch a series of low-Earth orbit satellites that will provide global broadband service. There is speculation that Redwire will be a supplier to this project.

Social media caught wind of this speculation last week and caused the stock to jump in after-hours trading. It then sold off sharply the next two days as these short-attention-span traders moved on.

I believe Redwire is the best value in the space sector and that there still is a chance that some sort of news may eventually come from the Project Kuiper situation. Amazon is spending $10 billion on this project, and Redwire is a key supplier of many items it will need to become operational.

Technically, the stock has good support at $10. It trades thin, which is why social media was able to spike it so sharply last week. My belief is that they will rediscover this play again and cause another sharp move. 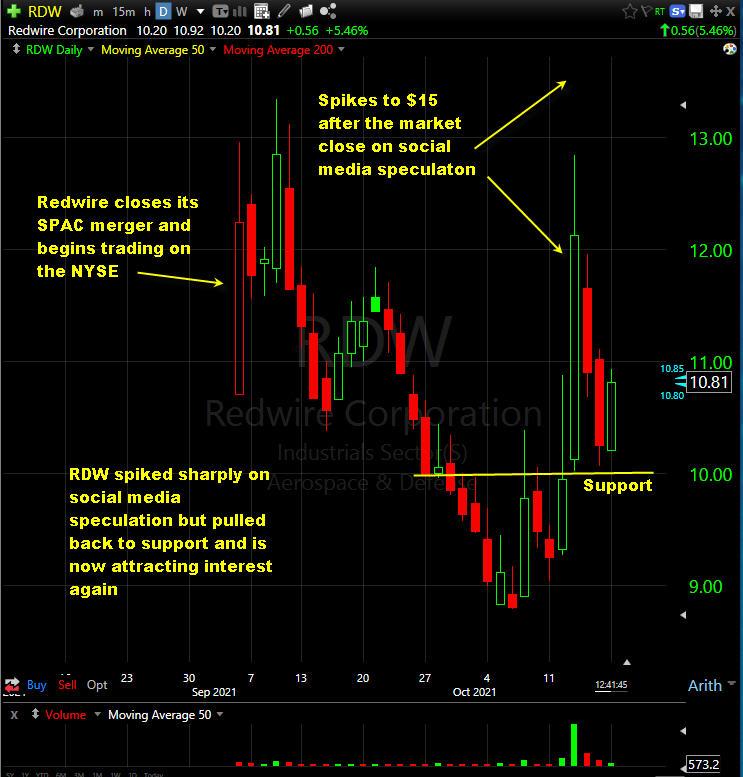 Please note that due to factors including low market capitalization and/or insufficient public float, we consider RDW to be a small-cap stock. You should be aware that such stocks are subject to more risk than stocks of larger companies, including greater volatility, lower liquidity and less publicly available information, and that postings such as this one can have an effect on their stock prices.

Get an email alert each time I write an article for Real Money. Click the "+Follow" next to my byline to this article.
TAGS: Investing | Markets | Small Cap | Stocks | Trading | U.S. Equity