Over the last couple of years, I have made many good trades in Aurinia Pharmaceuticals (AUPH)  -- despite a generally poor chart. And I believe that another good opportunity is very slowly developing.

This is how I am approaching the stock right now.

AUPH received much-anticipated FDA approval for its drug with the commercial name Lupkynis for the treatment of lupus nephritis, which is an "unpenetrated therapeutic area." The approval also was in a form that pushes potential generic competition out from 2027 to 2037. This is potentially a $1 billion drug, and it is now de-risked with approval.

The FDA approval resulted in a classic "sell the news" situation for AUPH, which isn't too big of a surprise since it had been anticipated for years. The stock is up less than $0.50 since approval, although the situation has changed drastically with the formal FDA approval.

The main reason for this action is impatience. Aurinia has much work to do to roll out the drug and start sales. There is also some disappointment that there aren't any signs of a takeover. I believe the market will gradually embrace the potential here and drive the stock toward some of the analyst price targets over $30.

The major risk with this trade is that it may take a while for it to work. There is no immediate catalyst and rolling out a new drug like this often presents some difficulties. However, this is a drug with tremendous market potential, and there no longer is any FDA risk.

AUPH will likely be boring in the short term but building a position in the $15 to $16 area offers lower risk with the potential of an eventual double. 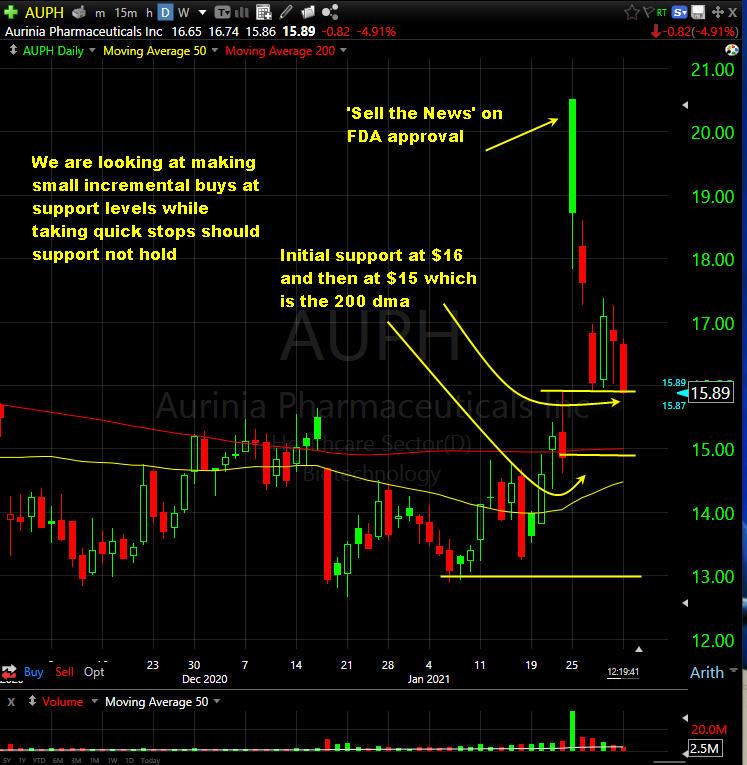 Get an email alert each time I write an article for Real Money. Click the "+Follow" next to my byline to this article.
TAGS: Drug Approvals | Investing | Markets | Small Cap | Stocks | Trading