One of my largest current positions is Ammo, Inc. (POWW) , which is currently trading at levels it hit back in May despite a steady diet of positive news.

POWW is a manufacturer of ammunition and is growing rapidly. In the last several months, it has raised guidance at least twice and is now expecting revenues of $190 million to $210 million in the fiscal year ending March 2022. The company completed the acquisition of gunbroker.com, has backorders that doubled due to a long-lasting ammunition shortage, is working on completing a new and more efficient factory that will come online next year, and has instituted a call center that is ramping up sales.

A complete investor presentation can be found here.

Despite this flow of positive news, the stock is trading very poorly and is not generating any momentum. The main reason for this is that shareholders of gunbroker.com received POWW shares, and they have registered 13.73 million for potential sale. These shareholders aren't selling due to a lack of conviction. They sell because they have an opportunity to spend some money on other things that they couldn't buy previously.

In addition to the selling pressure caused by insider selling, there has recently been weak small-cap action overall, which is preventing new buyers from stepping up. The buyers will likely appear when the price action improves.

This selling pressure will eventually run its course, and my feeling is that it is just about done. The company is expecting third-quarter revenues of about $60 million versus $12 million in the same quarter last year.

When you are potentially growing revenues by 500%, then you must be doing something right. 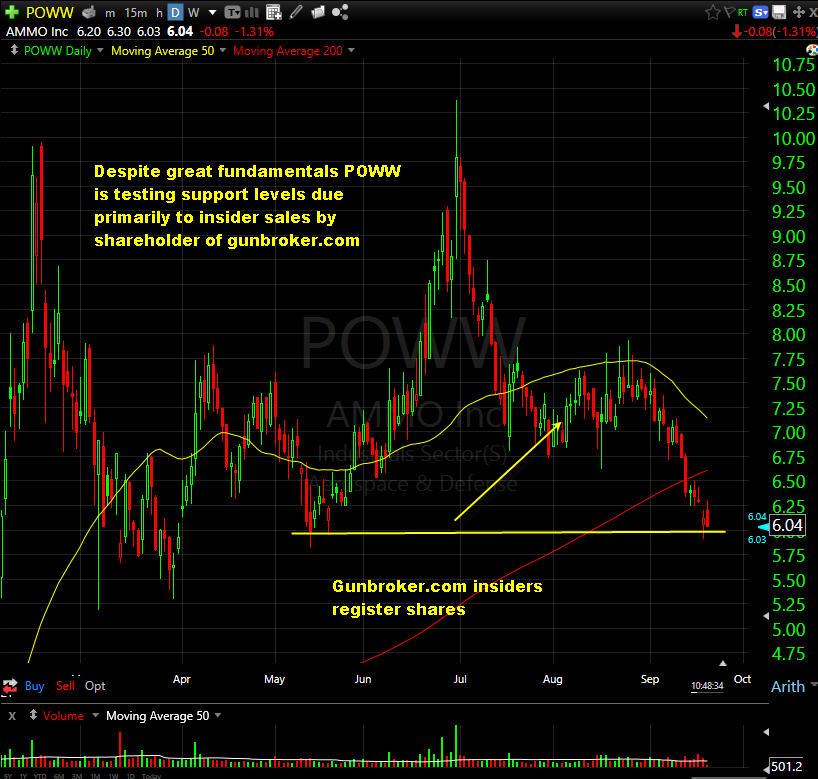 Get an email alert each time I write an article for Real Money. Click the "+Follow" next to my byline to this article.
TAGS: Investing | Markets | Small Cap | Stocks | Trading