The cannabis sector of the market has been under pressure recently, as investors grow impatient from a lack of legislation that would allow the stocks to be fully listed on the Nasdaq exchange. U.S. stocks that have a direct connection with cannabis are currently relegated to the OTC exchange, which does not have the same level of liquidity as the Nasdaq.

But there are some secondary plays on the cannabis sector that don't have this listing restriction. They are primarily equipment providers like GrowGeneration Corp  (GRWG) and Agrify Corp
(AGFY) .

Another play that is on my radar is Urban-Gro (UGRO) , which is very small and trades thinly, but it appears to have a very strong balance sheet and is on the brink of strong growth.

UGRO provides design, engineering, and integration of growing systems for cannabis and foods. It develops what's called Controlled Environment Agriculture (CEA) systems. It also contracts to manage these systems on an ongoing basis. On June 29, the company acquired MJ12 Design Studio, which is a multistate architectural and interior design firm with a focus on the CEA market. The deal is expected to be immediately accretive.

The company did a spot secondary on Feb. 11 and raised roughly $62 million. It used some proceeds to retire debt and to complete the MJ12 deal, but it had cash on hand of $50 million as of March 31, which compares well to its market cap of $100 million.

It also saw revenue jump to $12 million in the first quarter, which was a jump from the prior quarter of $9.2 million.

An investor presentation can be found here. 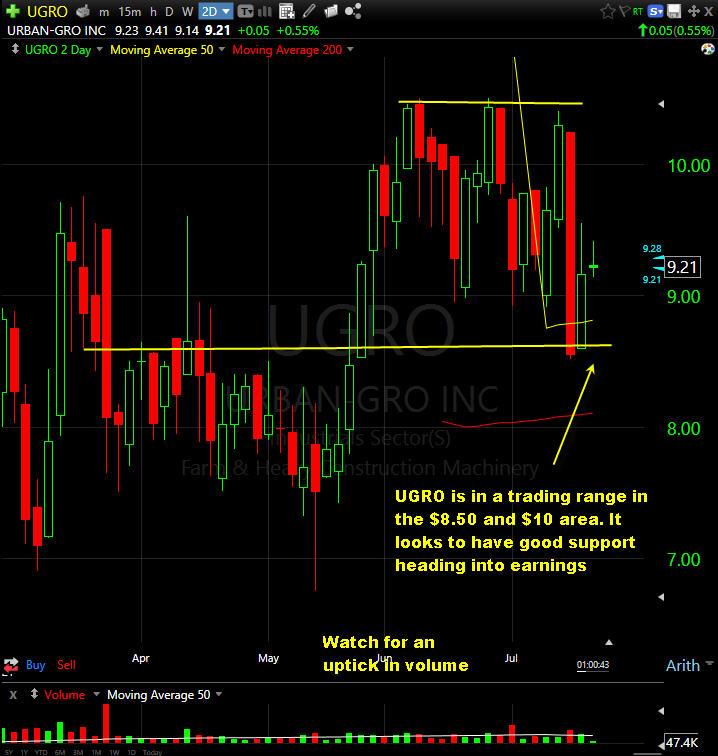 The stock is a micro-cap and trades very thinly. It can be very volatile, but the strong balance sheet combined with good growth should dive it higher over time.

The company has announced that its earnings report for the June quarter will be issued after the close on Aug. 11.

Get an email alert each time I write an article for Real Money. Click the "+Follow" next to my byline to this article.
TAGS: Investing | Stocks | Agriculture | Cannabis