For his second "Executive Decision" segment of Mad Money Thursday night, Jim Cramer spoke with Brian Cornell, chairman and CEO of Target Corp. (TGT) , which just reported same-store sales up 10.8% for the quarter.

Target welcomed millions of new customers, both online and in-store. The quarter included a 140% rise in online sales and a 300% increase in pickup and delivery services, according to Cornell.

Cornell credited Target's success to their multi-category strategy that includes food, medication, essential household supplies, electronics and everything people needed to shelter in place. He also credited their omni-channel strategy for purchases.

Let's check out the charts of TGT.

In the daily bar chart of TGT, below, we can see that prices peaked back in December, or well ahead of the broader market, and they did not hit a low until early April, or later than the broader market. Prices recovered but stopped short of the November/December highs. The slopes of both the 50-day moving average line and the 200-day moving average line are positive.

Trading volume was not much to write home about and the On-Balance-Volume (OBV) line has made only a slight recovery from its early April low. Buyers are not showing us an aggressive stance.

The Moving Average Convergence Divergence (MACD) oscillator is above the zero line in positive territory but crossing to a take profits sell signal.

In the weekly bar chart of TGT, below, we can see a mixed picture. Prices are above the rising 40-week moving average line but the rally has not broken above the highs of 2019.

The weekly OBV line shows only a very limited improvement the past few weeks. The MACD oscillator is trying to cross the zero line but it is a struggle.

In this Point and Figure chart of TGT, below, we can see two key clues. The chart shows us a possible price target of $151 but it also shows us that a trade at $115.37 could weaken the picture. 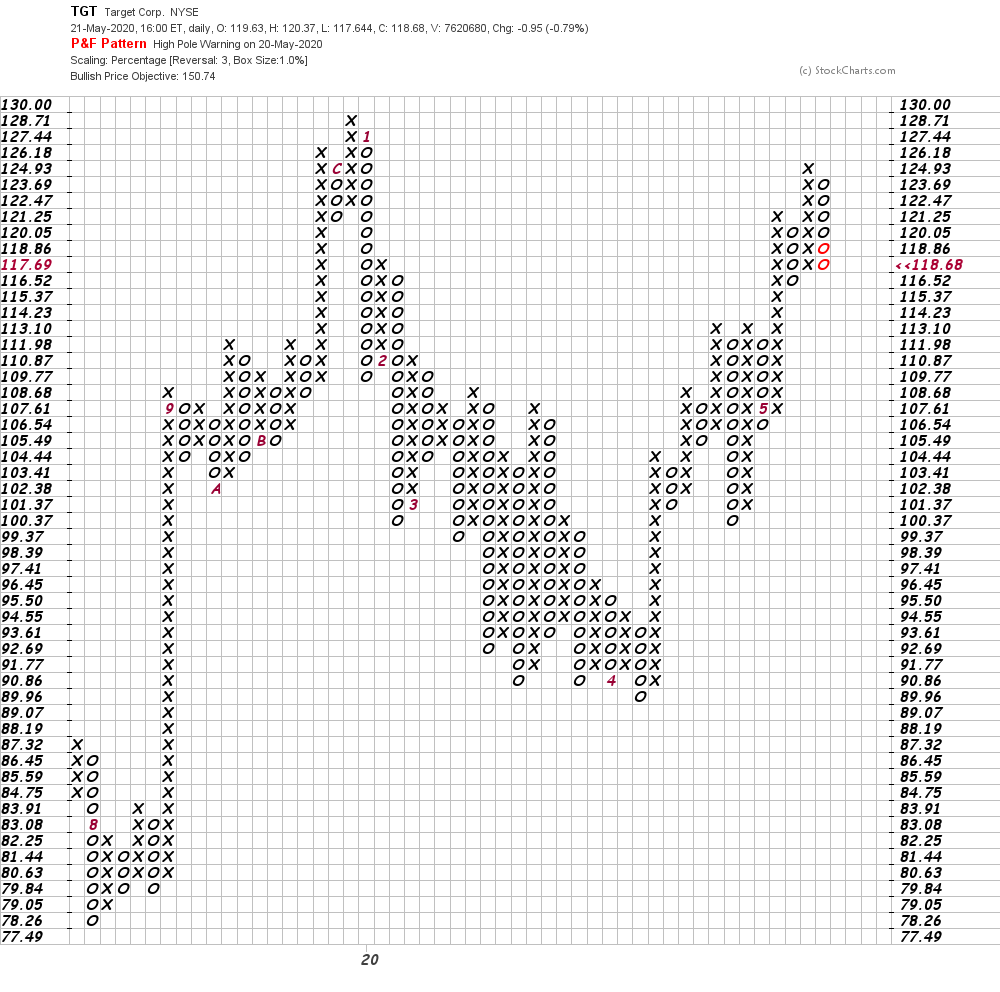 Bottom-line strategy: While it sounds like TGT is doing all the right things to survive in retail in this new environment the charts and indicators do not seem to reflect that same confidence, to me. If you are long TGT I suggest raising stop protection to a close below $115.

Get an email alert each time I write an article for Real Money. Click the "+Follow" next to my byline to this article.
TAGS: Earnings | Investing | Stocks | Technical Analysis | Retail | Mad Money | Executive Interview

A Strategy for Buying Logitech While Understanding Risk

Aggressive traders could look to buy a dip in the computer peripherals maker, though that play is not without risk.

Tutor Perini, Sterling Construction and Great Lakes Dredge & Dock should do well if there is a big infrastructure component in an eventual stimulus bill.

Cathay, like Singapore Airlines, is poorly positioned thanks to a lack of domestic business.

There has been a steady diet of "good" stocks, although they can shift quickly and require vigilance.

There is a presidential debate on Thursday. The market is being forced to adjust for renewed potential uncertainty.