For his final "Executive Decision" segment of Mad Money Tuesday night, Jim Cramer checked in with George Kurtz, CEO of CrowdStrike (CRWD) , the cybersecurity company that protects over 50% of the Fortune 100 companies, but also small and mid-size businesses too.

When asked about the types of threats companies are facing, Kurtz explained that ransomware attacks are more prominent than ever.

Kurtz then commented on the recent SolarWinds attacks that threatened national security. He said that the attacks used flaws in antiquated Microsoft (MSFT) technologies that "have to be fixed" or we risk similar attacks in the future.

When we looked at CRWD on March 11 we wrote that "...We have charts and indicators that suggest further declines in the weeks ahead but we have a secular bull market where so many traders and investors are convinced you need to 'buy the dip'... My strategy suggestion is that we should give things a little more time."

The On-Balance-Volume (OBV) line is still in a downtrend and tells me that sellers of CRWD remain more aggressive. The Moving Average Convergence Divergence (MACD) oscillator is still below the zero line in sell territory but it has narrowed and could generate a cover shorts buy signal in the near future if prices continue to firm.

In the weekly Japanese candlestick chart of CRWD, below, we can see that the two most recent candles show upper shadows, which tell us that traders have rejected the highs. The 40-week moving average is still bullish but is starting to crest.

The weekly OBV line has been moving sideways to lower from December. The MACD oscillator crossed to the downside in February for a take profits sell signal.

In this daily Point and Figure chart of CRWD, below, we still see a bearish price target of $110. Support on the weekly candle chart is likely in the $150-$120 area. 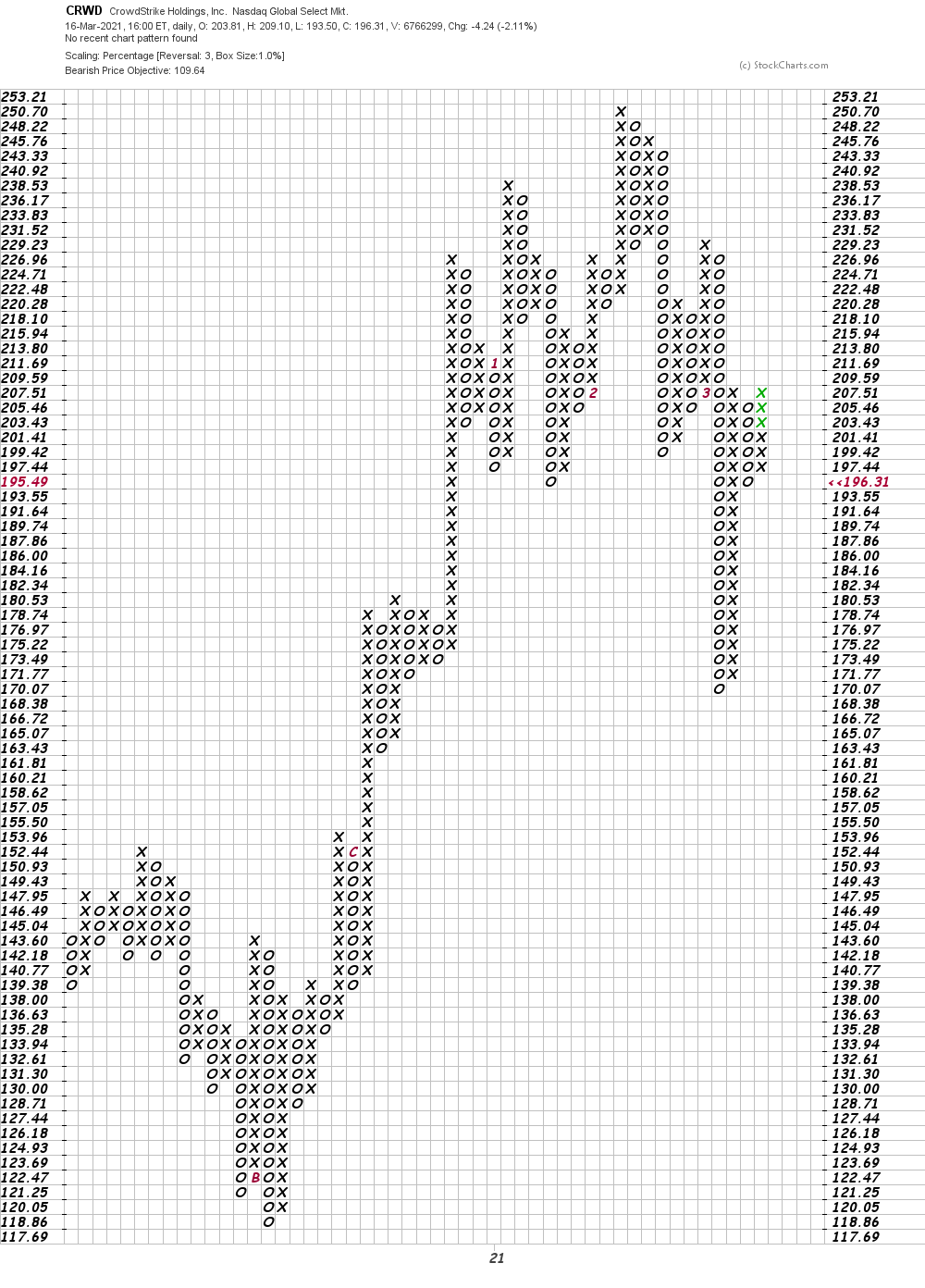 Bottom-line strategy: Yes the need for cybersecurity is probably greater than ever, but that need may already be discounted in the price action. I remain cautious on CRWD.

Get an email alert each time I write an article for Real Money. Click the "+Follow" next to my byline to this article.
TAGS: Investing | Stocks | Technical Analysis | Cybersecurity | Software & Services | Technology | Mad Money | Executive Interview