In the second Executive Decision segment of his "Mad Money" program Wednesday, Jim Cramer sat down with John Donahoe and Bill McDermott, the outgoing and incoming CEOs of ServiceNow Inc. (NOW) , the cloud automation company that saw its shares pop 5.9% Wednesday on a strong quarter.

Donahoe said digital transformation remains a priority at companies around the globe and ServiceNow is one of the core partners to help accomplish those goals. He said after returning from a trip to Europe he thinks CEOs are not focused on trade wars or Brexit, but rather on increasing productivity and providing better experiences for their customers and employees.

When asked about his pending departure to become the CEO of Nike (NKE) , Donahoe explained that he has a long history serving on the Nike board and he loves athletics. Nike is also embracing digital transformation, he said, and he will be helping it with those initiatives.

McDermott, formerly of SAP (SAP) , said investors need to look at companies such as SAP as partners with ServiceNow as they work together to help customers drive productivity and a better user experience. He called the chance to run ServiceNow the opportunity of a lifetime and he's excited to get started.

Let's check out the charts of NOW. We reviewed the charts of NOW on Oct. 11 and we unfortunately recommended going long: "Traders could go long NOW at current levels, risking below $250. Add on strength above $277. The $300 area and then $315 are our price targets." Traders who acted on this should have been stopped out on the way down.

In this updated bar chart of NOW, below, we can see that prices broke below the rising 200-day moving average line and continued to plunge lower. The test of the 200-day line earlier this month was successful, but this second test was much different. Trading volume swelled as longs quickly dumped positions. The support below $250 evaporated and the On-Balance-Volume (OBV) line made new lows for the move down, telling us that sellers of NOW were more aggressive. The Moving Average Convergence Divergence (MACD) oscillator quickly turned down from the zero line for a new outright sell signal.

In this weekly bar chart of NOW, below, we can see that this could well be the second week that NOW has closed below the rising 40-week moving average line. The weekly OBV line has made a new low for the move down, telling us that aggressive selling continues. The MACD oscillator is quickly moving down to the zero line and a potential outright sell signal.

In this Point and Figure chart of NOW, below, we can see that prices quickly reversed from up to down and made a new low for the move down. A bearish price target was projected and reached. Further declines are possible. 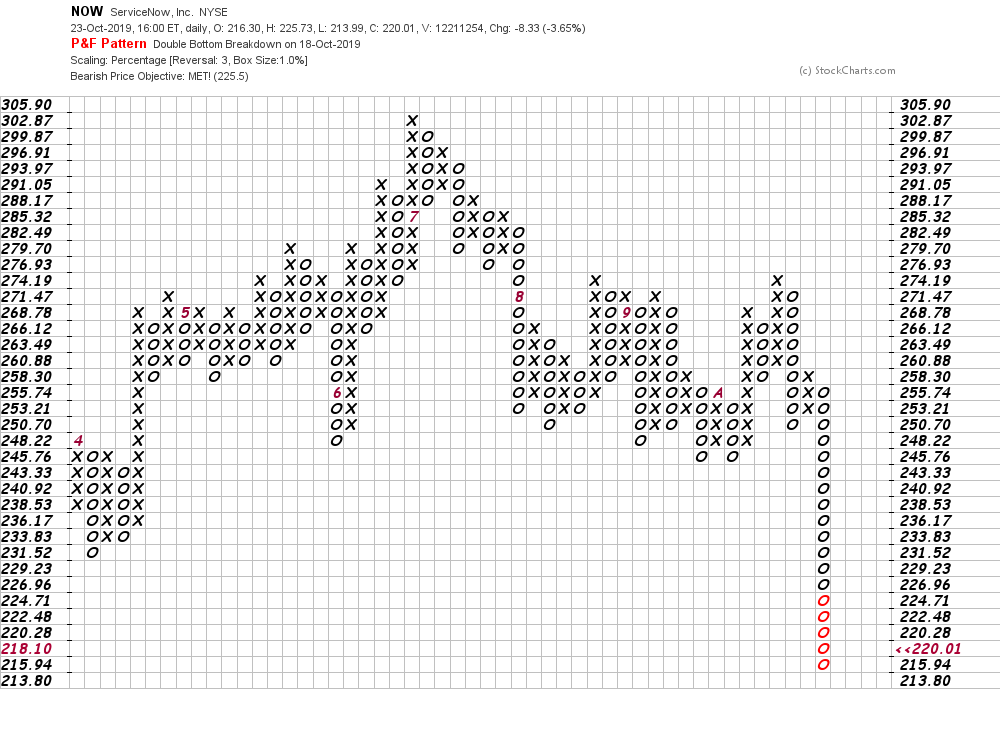 Bottom line strategy: Traders should dust themselves off after taking a loss on NOW. NOW will need to rebase at lower levels before it becomes attractive again.

Get an email alert each time I write an article for Real Money. Click the "+Follow" next to my byline to this article.
TAGS: Earnings | Investing | Stocks | Technical Analysis | Software & Services | Technology | Mad Money | Executive Interview | Real Money