Wow. Hard to believe how far ServiceNow (NOW) ran overnight. As much as 15%. This former Sarge name (it is hard to say former when you see an old fave soar) had been down 43% year to date going into the report, and down 48% from November 2021.

That has changed significantly since Wednesday's closing bell.

On earnings? Maybe. On revenue generation? That missed. On guidance? Guidance was not a home run.

Maybe it was the fact that CEO Bill McDermott had been named Chairman of the Board, effective immediately, as founder Fred Lundy steps back from that role, but does remain a member of the Board. Could be. McDermott is thought of, by myself and others, as one of the best CEOs on the Wall Street. Now, he's more than "just a CEO" at ServiceNow. Huzzah.

For the full year, SerrviceNow expects subscription revenue growth of 23% (28.5% in cc), and subscription gross profit margin of 86%, operating margin of 25% and free cash flow margin of 29%.

As the quarter closed, ServiceNow ran with a net cash position of $3.956B and current assets of $5.476. Both of these lines have grown since the start of the year. Current liabilities come to $4.432B, bringing the firm's current ratio to a solid 1.24.

Total assets add up to $11.106B. This includes just $1.028B in "goodwill" and other intangibles. That's just 9.3% of total assets, which we love to see. Total liabilities less equity total $6.583B. This includes $1.485B in long-term debt, which the firm could pay off out of pocket almost three times over. This is a very good balance sheet.

So far, I have found nine sell-side analysts that are rated at a minimum of four stars (out of five) at TipRanks and have opined on NOW since last night. All nine rate the stock at either a "buy" or something we consider to be "buy-equivalent."

While performance is fine and the business is growing, the firm did miss consensus across several metrics and even took guidance (while still good) below Wall Street's expectations.

Is this really a case of Wall Street's already placed faith in Bill McDermott? Believe me, he is a one man catalyst. Maybe some of this morning's run for the shares is simply because worse was feared with so many tech stocks falling out of bed. 50 times forward looking earnings is a tough train to board in these markets. 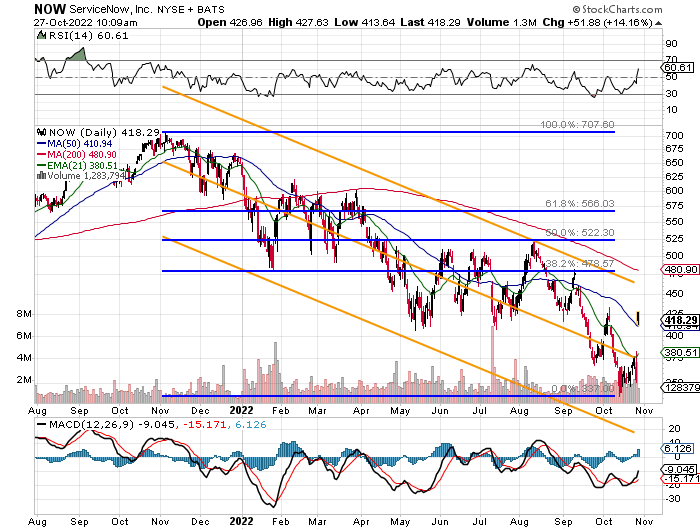 On the one hand, NOW has taken back both its 21-day exponential average (EMA) and 50-day simple moving average (SMA) Thursday morning. On the other hand, the stock has not created a gigantic unfilled gap that would require a price of $382 to fill. Then again a Fibonacci retracement of 38.2% (of the November 2021 to October 2022 selloff) would put the 200-day SMA ($480) in play.

I am not going to hop on the momentum trade today. I will tell you this, though. If after the Fed makes their statement next week, this stock has held that 50-day line at $410, then I think I would have to reconsider an equity purchase. Until then, I would rather sell $400 puts expiring Friday for the $2 premium and eat the shares if I have to. A trader could probably buy the $390 puts expiring Friday for about $1 if uncomfortable without some risk management in place.