By BRUCE KAMICH Sep 06, 2019 | 12:40 PM EDT
Stocks quotes in this article: NOW
ServiceNow Inc. ( NOW) is up 51% this year and the company made Jim Cramer's fantasy portfolio that he announced on his Mad Money program Thursday night. Let's pay a visit to the charts and indicators of NOW to see what parameters we need to focus on in the weeks ahead.
In the daily bar chart of NOW, below, we can see a basing pattern on the left side of the chart from October through January. A sharp gap to the upside starts the rally going up to a July peak. NOW corrected lower into August and it has moved mostly sideways into September.
Prices are trading below the declining 50-day moving average line. The slower-to-react 200-day simple moving average line intersects around $240, which is not all that far below the market.
The daily On-Balance-Volume (OBV) line has declined from the middle of July telling us that sellers have turned to be more aggressive the past two months. The Moving Average Convergence Divergence (MACD) oscillator has turned up from a low in August but it is still below the zero line.

In the weekly bar chart of NOW, below, we can see both the tremendous rally over the past three years but some divergences that need to be considered. Prices, even with the recent pullback, are above the rising 40-week moving average line.

Trading volume looks like it has diminished in recent months, which suggests diminished enthusiasm. The weekly OBV line shows improvement in March to May but then it weakens diverging from the price action and signaling more aggressive selling.

The MACD oscillator crossed to a take profits sell signal in July.

In this Point and Figure chart of NOW, below, we can see that the software has projected a bullish price objective of $318. A decline to $255.74 will start to weaken this chart. A trade up at $276.93 starts to improve the picture. 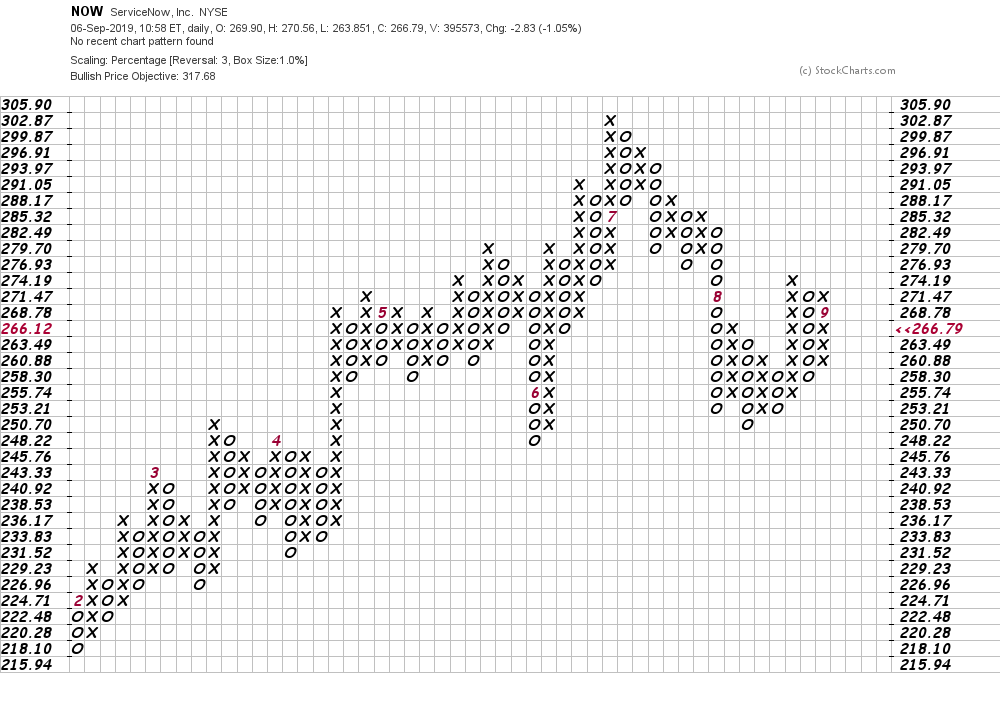 Bottom-line strategy: Bulls and bears are still figuring it out. We are likely to see a $255 to $277 trading range until further notice.
Get an email alert each time I write an article for Real Money. Click the "+Follow" next to my byline to this article.
TAGS: Mad Money | Investing | Stocks | Technical Analysis | Software & Services | Technology

Did the Fed Overreact and Print Too Much?

The central bank is stuck between a rock and a hard place, which it knows fully well.

Beware: This REIT Is on a Shaky Foundation