In his second "Executive Decision" segment of Mad Money Wednesday night, Jim Cramer spoke checked in with John Donahoe, president and CEO of ServiceNow Inc. (NOW) , the cloud software provider that delivered an eight-cents-a-share earnings beat with a 35% rise in year-over-year revenues.

Donahoe said ServiceNow now serves 75% of the Fortune Global 500 list. He said they remain very optimistic about their business. NOW recently announced a partnership with Microsoft Corp. (MSFT) , allowing the company to host its platform on Microsoft's Azure cloud service.

When asked about some weakness in the quarter, Donahoe explained that it's true that some renewals got pulled into other quarters, but overall, they raised their full-year guidance. Let's see what guidance we have from the charts.

In the daily bar chart of NOW, below, we can see an uptrend in place from a low back in November. The rally shows two gaps to the upside (late January and late April) but the most recent two-month advance does not show a gap and the price action is closer to the rising 50-day moving average line than the earlier part of the advance. This tells me the rally is weakening.

The daily volume pattern does not show increasing volume and the On-Balance-Volume (OBV) line has been flat the past three months creating a bearish divergence when compared to the price action. The Moving Average Convergence Divergence (MACD) oscillator shows a weakening pattern from February and just crossed (again) to the downside for a take profits sell signal.

In the weekly bar chart of NOW, below, we can see a long and strong advance from $75 in late 2016. Prices are above the rising 40-week moving average line, however, the weekly OBV line has diverged from the price action this year.

The weekly MACD oscillator has narrowed sharply and could cross to the downside soon.

In this Point and Figure chart of NOW, below, we can see the uptrend and a possible upside price target of $344. A decline to $271.47 is likely to weaken this chart. 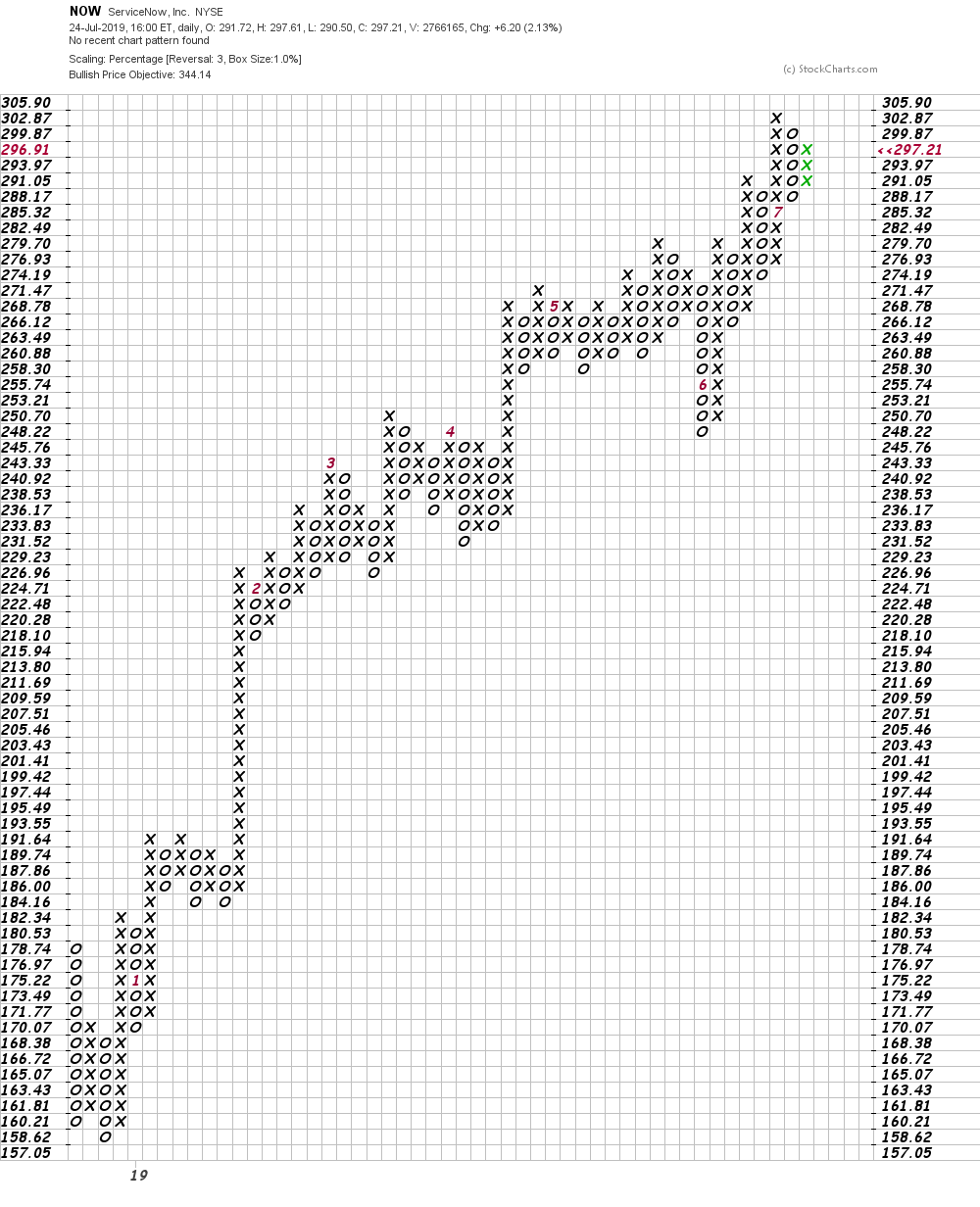 Bottom-line strategy: A number of bearish divergences suggest that NOW can correct lower. A close below $280 will break the 50-day moving average line. A decline to the $250-$240 area is not far fetched.

Get an email alert each time I write an article for Real Money. Click the "+Follow" next to my byline to this article.
TAGS: Earnings | Investing | Stocks | Technical Analysis | Software & Services | Technology | Mad Money | Executive Interview