It's taken four-straight days of rallying, but there was a shift in sentiment on Thursday. We hadn't seen it all week, but you could start to feel it as the day wore on.

I think one change is that for the first time in weeks the S&P rallied into the close. Those late-day sell-offs keep folks a bit more cautious than they normally would be. So I think to many that was a relief. We saw it in the put/call ratio, too.

As noted here yesterday the put/call ratio was relatively high at .85, the sort of reading we would not normally see during an up move. Thursday's put/call ratio was down to .73 which is the lowest reading in just over a week. So there's a minor shirt.

If we forget about the put/call ratio, we can also see folks remained relatively cautious by looking at the National Association of Active Investment Managers (NAAIM) Exposure Index. Recall two weeks ago it topped at 113 (that means they were on margin). Last week, they had pulled their horns in to 83 and now they stand at 79. But this survey is taken on Wednesday morning, so it is pretty fresh, meaning folks were not terribly exposed to the market as of Wednesday. 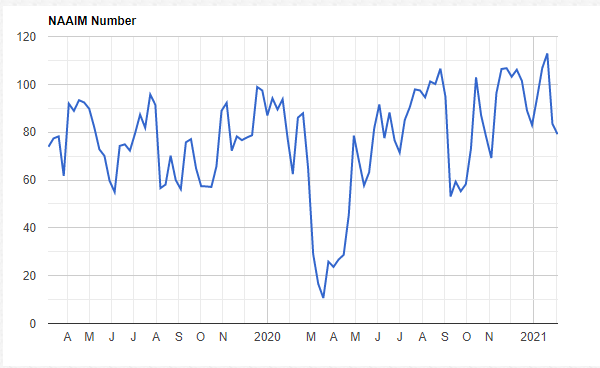 I do not think we are back to the giddiness we saw a few weeks ago. And we're probably not even back to complacency, yet. But we are on our way. The complacency that was wrung out of the market last week will creep back in.

Away from that, the best news of the day is that the breadth was good enough to turn the McClellan Summation Index upward. Perhaps I will be wrong and we'll just ramp forever and a day, but my suspicion is that we are more apt to see the market swing something like we saw in the fall (green box).

For the last week I have said that we are oversold enough and even if we sell off for a day or two we'll just go right back to an oversold condition. For the first time today you can finally see the Overbought/Oversold Oscillator has moved. It is not overbought yet but it is now heading there. I expect we will get there later next week.

In the meantime, the Daily Sentiment Index (DSI) for Nasdaq is back at 87, which means a down day resets it and an up day says stop buying for now, because the likelihood for it to go over 90 is high if there is an up day.

The DSI for the Volatility Index is at 15, so here, too, we're getting close to a reading in the single digits. The closer we get to an overbought reading these extreme, or about to be extreme, DSI readings will matter.