I believe the last few weeks have seen sentiment settle into gloominess, but there is a sidebar to that. You see when sentiment gets this sour and stocks have been down so much, folks look for a short-term rally. It would be only natural, right?

And that's how I sum up the current sentiment: bearish, but many are looking for a short-term rally to relieve the oversoldness. So, are we really oversold? My work on that score remains mixed.

To get a good oversold condition using my Oscillator, the market needs to string together several poor breadth days. Would it surprise you to know that Nasdaq has seen breadth negative only four of the last 10 trading days? On the other side of the market, the New York Stock Exchange has seen only three positive breadth days in the last 10 days.

What about if we just use price? Well the S&P 500 has been up six of the last 10 trading days. Nasdaq splits it at five up and five down. I am sure others use different methods to determine an oversold condition, but looking at these two short-term measures, it's a coin toss.

On the intermediate term front, it's easier to make the case for an oversold condition. It's getting easier to make the case that we're oversold, or getting that way. When we last looked at the 30-day moving average of breadth it was hovering just below the zero line (black arrow) and I noted we were not oversold. Now you can see this indicator has come down near the bottom of the page, pushing it closer to an oversold condition.

The Hi-Lo Indicator for Nasdaq is now at .05 and the NYSE is at .06 so those are oversold. 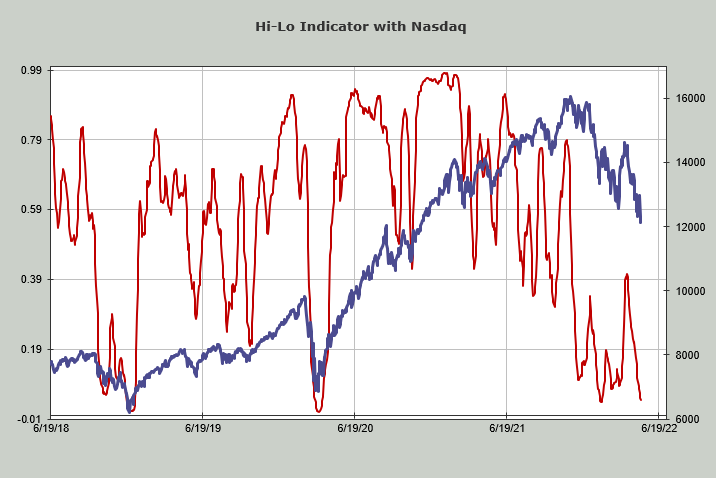 The Volume Indicator is at 46% which gets it closer to an oversold condition as well. 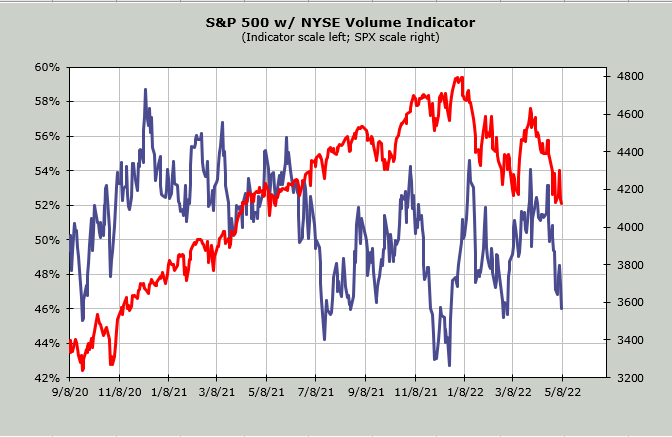 Everyone who is looking or waiting for that elusive whoosh that feels like a mini panic, that hasn't happened yet. Oh sure we got 93% of the volume on the downside on Thursday, but did it really feel like panic? As I go through the charts, what strikes me is that the selling is highly concentrated in all those 'concept' stocks that were so hot in late 2020 and early 2021. In other words, the place that the selling has been concentrated in for the last 15 months remains where the selling is concentrated.

Oh sure a few groups have seen some selling pick up, like the now beloved commodity stocks (ex energy of course) but drugs, foods, and heck, some of those mega cap tech names continue to hang in there. Even banks and semis didn't make new lows late last week. Do you realize the Transports haven't made a lower low since last September?

The Daily Sentiment Index for bonds finally fell back to single digits on Friday (9). The S&P is at 13 and Nasdaq is at 12 so should we get some downside early in the week. I'd expect to see the stocks at single digits and some downside would push the short term Oscillators to an oversold condition.

Just look at the chart of the S&P for the last two weeks: up/down/up/down, hanging around at the February lows.