Clearly, all the major equity indices remain in near-term downtrends. However, on the data front, the McClellan Oscillators remain deeply oversold while the sentiment data have intensified in their bullish signals.

All the indices closed notably higher Friday on lighter volume.

All closed at or near their intraday highs with some improvements as the S&P 500, Nasdaq Composite, Nasdaq 100 and S&P MidCap 400 closed above their near-term resistance levels.

However, none of the gains were enough to close above their near-term downtrend lines as all remain negative.

The cumulative advance/decline lines for the All Exchange, NYSE and Nasdaq remain in downtrends as well.

Thus, while there was progress, the charts remain bearish.

The data, on the other hand, intensified its positive message.

Despite the massive rally on Friday, all the McClellan one-day McClellan Overbought/Oversold Oscillators remain oversold (All Exchange:-116.89 NYSE:-116.56 Nasdaq:-115.65).

More importantly, the Open Insider Buy/Sell Ratio (see below) saw another spike in insider buying as the crowd remains terrified with a 307.8 reading, which is the heaviest buying activity registered on their part in the past three years. 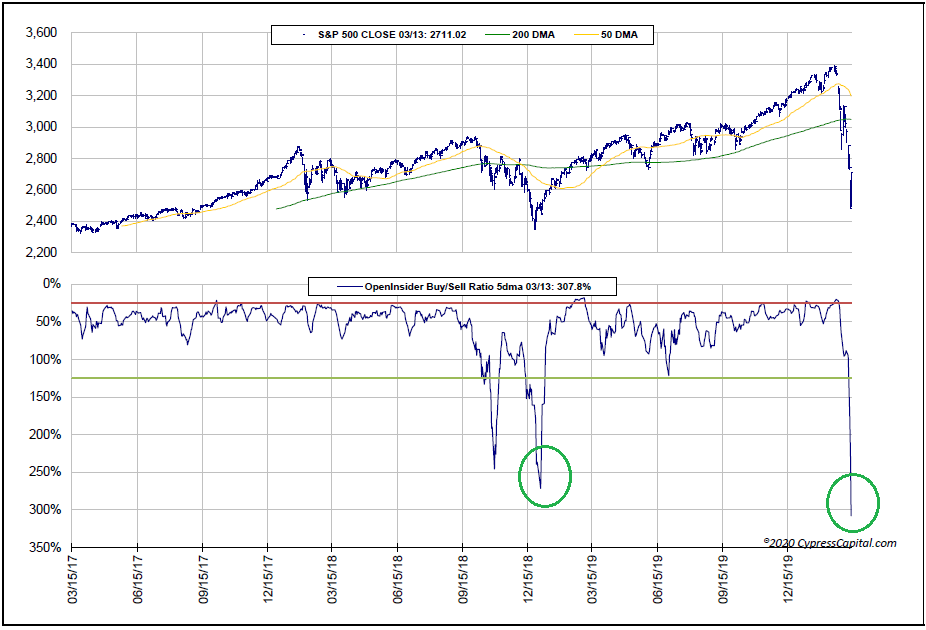 On the opposite side of the scales, the detrended Rydex Ratio (contrary indicator) has moved to an extremely bullish -3.51, as the leveraged ETF traders are now at their highest level of leveraged short in the past decade.

These two data points were at the exact opposite readings just prior to the current market drop. We reiterate, of all the psychology indicators we have viewed over the past few decades, the opposing sentiment of traders versus insiders has been one of the most dependable in our data toolbox.

Also, the counterintuitive percentage of S&P 500 issues trading above their 50-day moving averages (see below) is near a record low of 3.0%. 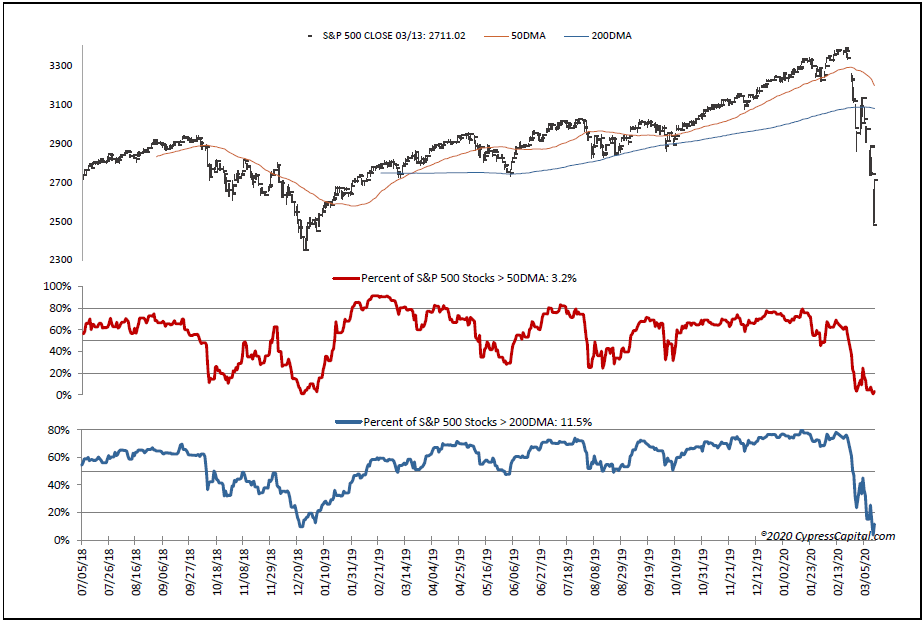 The S&P 500 is trading at a P/E of 15.8x consensus forward 12-month earnings estimates from Bloomberg of $172.1.86, while the "rule of 20" fair value multiple is at 19.1x. This still suggests the S&P remains significantly undervalued.

Even though markets are heavily down this morning, we believe our near-term "neutral/positive" outlook for the major equity indices remains appropriate.

Get an email alert each time I write an article for Real Money. Click the "+Follow" next to my byline to this article.
TAGS: Indexes | Investing | Stocks | Technical Analysis | Trading

A V-Shaped Bounce and a Story of 3 Markets

To do well in this market you have to be in the 'third market' where the values are.

What's Next for Wayfair? Perhaps an Upside Breakout

We looked at W earlier this month. Let's check and see how things look Wednesday.