There is anecdotal sentiment and there are sentiment statistics. Often the two go hand-in-hand. But in times of high volatility, they can be quite divergent.

After Monday's late-day rally, the put/call ratio remained stubbornly high, but the chatter was much happier than it was on Monday morning. Then Tuesday arrived, and the chatter that was happier on Monday afternoon was quite concerned. Heck, even I was concerned that the rally was so disappointing. But it wasn't enough to give up on the rally since breadth was still leading and sentiment was still poor, not to mention the market was still oversold.

Then comes Wednesday and we got the Investors Intelligence results. The bulls are now at 47%, the lowest since May of 2020. Keep in mind that in mid-July the bulls were at just over 60%. I would have liked to see the bulls down under 45%, but I think it shows how much complacency has been wrung out of the market on this intermediate-term indicator.

And Wednesday's anecdotal chatter? Oh definitely much more positive than it was on Tuesday. 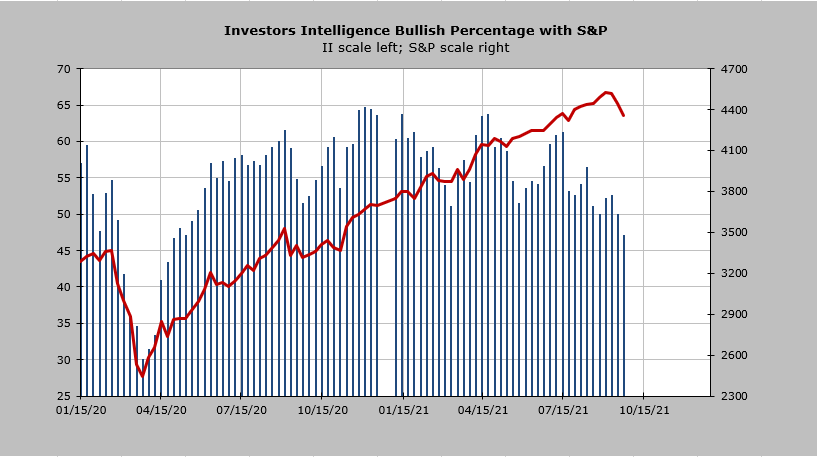 Now, I would like you to take a look at the McClellan Summation Index. Do you see that big peak in mid-June? Notice how bulls kept elevating after that, but by July, when it was clear the majority of stocks were in downtrends, the bulls started their push lower. If folks are not making money, they are not going to stay bullish, are they?

Speaking of the Summation Index, as previously noted breadth has been holding up much better than the indexes have in the last few days and Wednesday was no exception. In fact after Monday's decline this breadth indicator needed a net differential of positive 2,900 advancers minus decliners to halt the decline (which made the market oversold). As of today, it needs positive 200. That means if breadth can continue on this path this indicator might actually turn upward after three months of heading down.

Getting back to sentiment for a minute, let me note that the options players seemed to have stayed cautious during the Wednesday rally as the put/call ratio ended the day with a reading of .98. That is quite unusual for a market that was up so much on the day.

It is still too soon for me to determine when we might be overbought again, but if breadth continues to perform as it has been, then we'd be back to an overbought reading sometime in early October. I would expect some chop after a day like Wednesday, but then I'd think we'd rally again.