I am not a fan of chart analogs. You know all those charts that plot out today's market compared to, oh I don't know, 1929 or 1987. Those are favorite years for the analogs due the crashes we saw in those years. I don't have a strong reason for this view, but mostly it's because markets rarely play out exactly as they have in a prior year.

For example, when there is failing breadth and rising new lows and sentiment is too bullish, to me that is a set up for a poor market environment. When breadth is rising and new lows are contracting and sentiment is too bearish, that is a set up for a better market environment. Neither of those have anything to do with the price pattern matching a prior period.

Yet sometimes I simply see a pattern and cannot help myself (call it an occupational hazard!). This weekend I found myself staring at the chart of the Semiconductor Index, or the SOX, and realized that the channel lines I have been drawing in on the index charts, connecting the highs since last spring (see last week's column with these lines) were also present on the chart of today's SOX. Only the SOX has broken out on the upside (the major indexes have not).

I suppose from staring at charts on the market for nearly four decades, I have a tendency to remember patterns I have seen before, and sure enough there was a similar pattern in the SOX back in 1999. Let me reiterate that this is simply an exercise in 'what if' and one that I thought was of interest. Let me note also that in the first half of 1999, the SOX was a giant sideways whereas that was not the case for the current market prior to this channel beginning.

In any event, both times have a rising channel that saw a breakout to the upside. My expectation is not for a blow-off in the semis like we had in 2000, but if I am wrong, I suspect you will see this analog start popping up all over the place.

As for the current market, not much has changed. Sentiment is still complacent bordering on giddy. Friday's ETF put/call ratio was 0.66, the lowest since late July when we saw a reading of 0.64. The S&P 500 promptly retreated for 2-3 days after that reading. To that, I can add that the ISE Call/Put Ratio at 1.55 is now the highest since Feb. 1. So folks are pretty bullish. 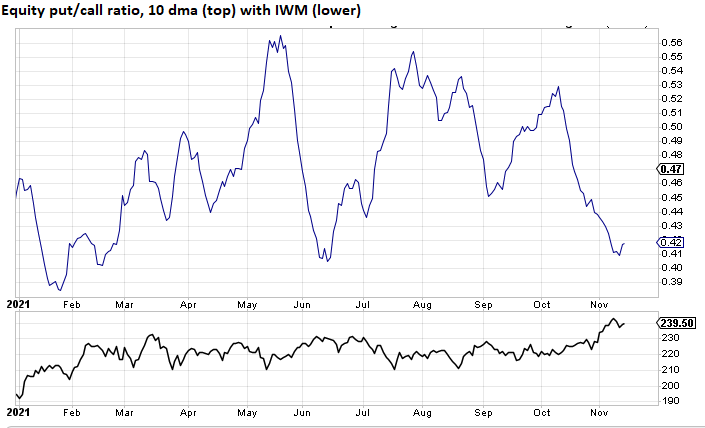 As I have said for the better part of a month now, too bullish sentiment readings are not bearish. They are bearish if breadth has rolled over. Last week, breadth stalled -- the McClellan Summation Index is still stalled -- and the number of stocks making new highs fell off precipitously and the new lows rose. None of that is persistent enough to fret over. Not yet. But if they turn persistent, then I will change my view that after this pullback/chop we should rally again.