Do we have a change in leadership in the making?

The weakness in the market Wednesday appeared to be coming largely from the technology sector that had been leading the market's rally from the March lows. In our opinion, this action is suggestive of a potential shift in market leadership, which is supported by the positive breadth Wednesday as the large-cap indices declined.

We now suspect some sectors will emerge as new leaders while their smaller market capitalizations may have less impact on the index charts. 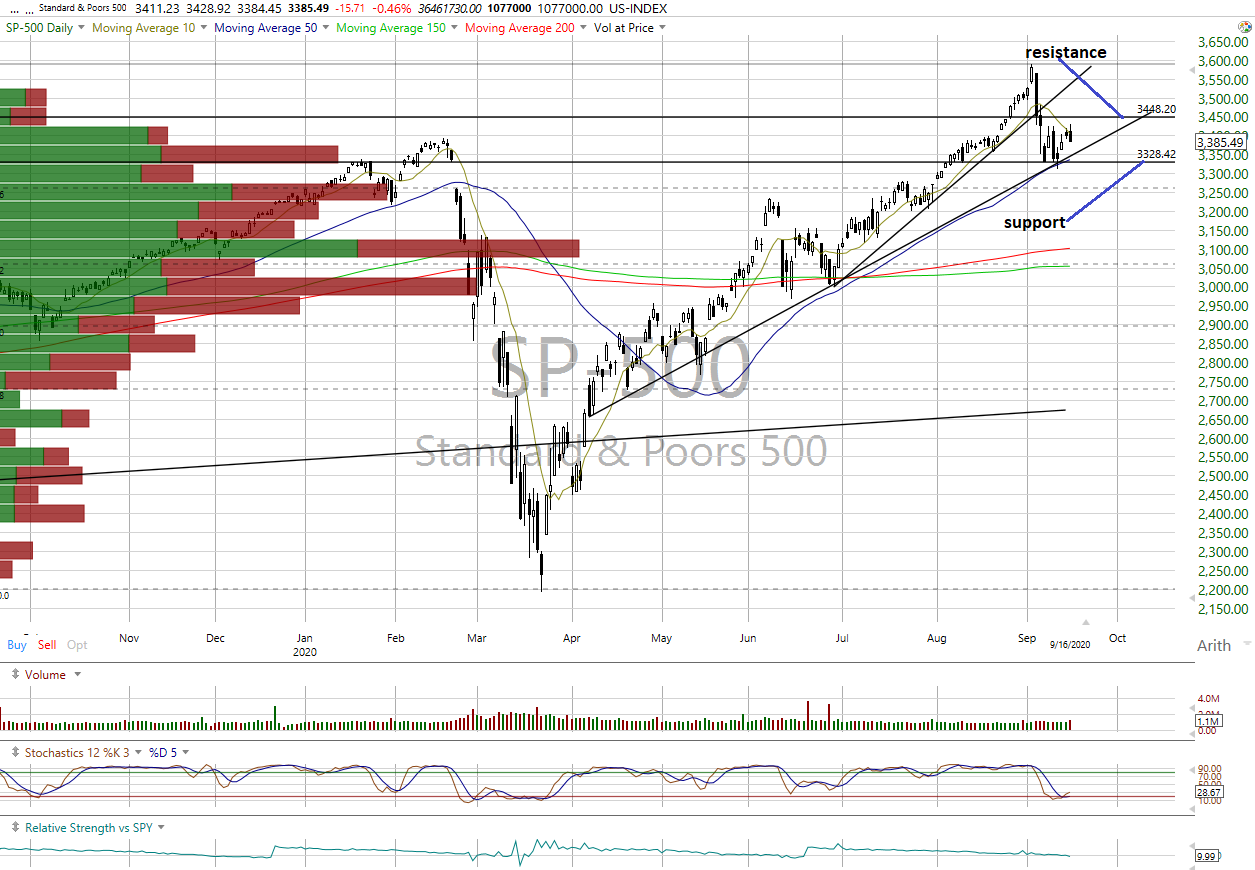 The equity indices closed mixed Wednesday with the S&P 500 (see above), Nasdaq Composite and and Nasdaq 100 posting losses as late-day selling pressure took control. The rest posted gains with no technical events of importance being generated other than the Dow Jones Transports closing above resistance.

What we find interesting is this action was the opposite of what had been happening as the indices were rising while breadth was deteriorating.

In our view, Wednesday suggests we may be seeing a shift in leadership away from the large-cap techs that have held sway since the March lows.

All the index near-term trends remain neutral except for the Transports staying positive.

Meanwhile, cumulative breadth improved with the All Exchange, NYSE and Nasdaq cumulative advance/decline lines turning positive with only the Nasdaq's below its 50-day moving average.

The Open Insider Buy/Sell Ratio is also neutral but dipped again to 46.8 while the detrended Rydex Ratio (contrary indicator) remains neutral at 0.29 with the leveraged ETF traders slightly decreasing their leveraged long exposure.

This week's Investors Intelligence Bear/Bull Ratio (contrary indicator) remains bearish at 16.2/59.0 after hitting a two-year high last week at 61. We reiterate the lopsided bullish sentiment on the part of investment advisors implies a potential shift in their outlooks that could be meaningful for the markets should such a move be generated.

The counterintuitive percentage of S&P 500 issues trading above their 50-day moving averages is neutral at 60.4%.

The valuation gap remains extended with the S&P 500 trading at a P/E multiple of 23.2x consensus forward 12-month earnings estimates from Bloomberg of $146.18 per shares, while the "rule of 20" finds fair value at 19.3x.

While we are maintaining our near-term "negative "outlook for the equity markets due to psychology and valuation, we now suspect the source of weakness may possibly come largely from the prior market leaders that appear extended while other sectors may come to the fore.

Get an email alert each time I write an article for Real Money. Click the "+Follow" next to my byline to this article.
TAGS: Indexes | Investing | Markets | Small Cap | Stocks | Technical Analysis | U.S. Equity