It's only natural. What's that? That in order to see what's behind a peak, one must crest the heights immediately to its front.

Mountain hikers who've spent time in the White Mountains of New Hampshire know that Mt. Adams, the second-highest peak east of the Mississippi River, can be invisible from just a few kilometers to its south thanks to its proximity to Mt. Washington, which is roughly 500 feet higher. Yet Mt. Adams can be the more challenging (and far more fun) of the two. Visiting or viewing, both peaks are quite worthy.

At or close to peak levels, after bottoming in early October, our major equity indices are cresting, and that's just fine. You can throw Monday, which was Veterans Day, right out of the window. Trading volume was so light that the day is not truly worthy of including in any analysis. Volume directly attributable to S&P 500 constituent companies printed 11% below its own 50-day simple moving average (SMA), while volume directly connected to the Nasdaq Composite landed 14% below that mark. Trading volume was even lighter than that in relative terms for lower-profile indices. 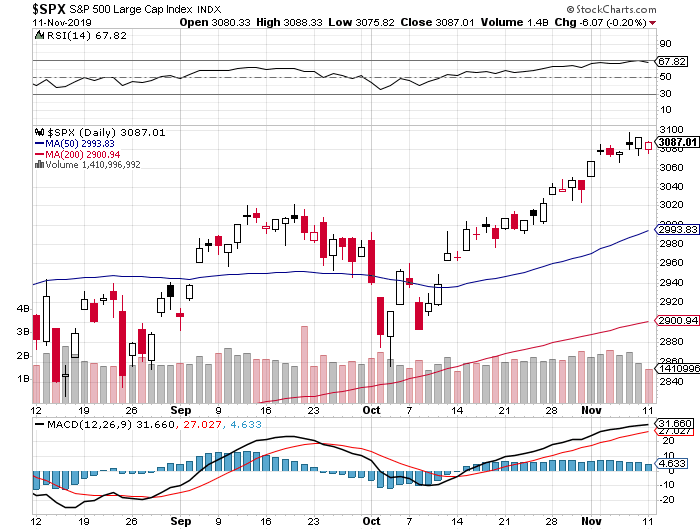 One quickly sees a rounding, or "cresting," of the current peak. This happens simultaneously with a nearly "overbought" reading for Relative Strength and daily moving average convergence divergence (MACD) that has not experienced a move by the 12-day exponential moving average (EMA) across the 26 day EMA in nearly a month, though the two do draw closer.

What I am trying to tell the reader here is that it would be somewhat natural at this point for the S&P 500, now at 3,087 and its own price (not volume) 50-day SMA, now at 2,993, to pull toward each other as the two numbers are simply spread too far apart. This does not mean that markets cannot go higher. Recent gains have been quite robust as many fund managers remained positioned incorrectly for too long.

Without a major headline news catalyst, the lowest-hanging fruit has been picked for now. Santa may still be on his merry way, but there is still some wood to cut until then.

There are a number of things that I just do not like, yet I understand that on these issues there may be a difference of opinion. Among these things would be the use of escargot as food, the American League's continued persistence in the use of a designated hitter in place of the pitcher in the batting order (I mean, you either play baseball or you don't), and the death of rib-cracking, arena-style rock music.

I have been writing for years and have developed an irrational hatred for the use of the word "indexes" as a plural for index. I prefer "indices," though the dictionary informs me that both words are indeed acceptable. So it's me, not you.

The major indices ended the day on Monday pretty close to where they went out on Friday after spending the morning deep in the hole. The Dow Jones Industrial Average (DJIA) stood alone on the green side of the ledger, but that was skewed higher by the out-performance of just two stocks, a glaring example of why investors cannot refer to this average as anything more significant than it is.. a very narrow measure of a handful of blue-chip companies.

The two outliers were Walgreens Boots Alliance (WBA) , up 5.1% on news that the firm had been approached by KKR & Co. (KKR) regarding a buyout meant to take the firm private, and Boeing (BA) , up 4.6% as that firm indicated that it felt the now-infamous 737 Max could resume commercial service as soon as January and that deliveries could resume next month.

My thought is to not get shaken on the wiggle. "To not get what on the who," you say? Exactly. To not get shaken out of good positions going into that final part of the year, even if the major indices do indeed wiggle a bit. Certainly there will be plenty of headline risk from many quarters as we creep forward. In order to see a bigger picture, my thought is that quite a few of our friendly neighborhood fund managers, who have been under-performing, are committing to the chase.

We are often told, "Don't fight the Fed"... well, the Fed is adding liquidity in the form of rapidly increasing money supply while anchoring the short end of the curve. This behavior almost completely relegates any debate over the proper level for the fed funds rate target as irrelevant. It is this provision for liquidity as well as the behavior of the tail end of the Treasury curve that matter right now, and the Fed for now has offered up that tail end to the bond market for control.

This "tail end" as well as currency exchange rates, not to mention our own short-term fortunes, remain at the mercy of trade-related headlines. So be it. There is another saying that has nothing to do with the Fed or China. They like to say that "The trend is your friend," and it is. That is where these fund managers come in. Let's take a look at trend.

This Porridge Is Too Hot

One finds quickly that the deep selloff of one year ago renders any Pitchfork modeling as ridiculous. Obviously the trajectory of this trend is clearly unrealistic. Then again, that deep selloff might be considered the outlier. I mean it. That selloff was the direct result of policy error as the Federal Open Market Committee (FOMC) stuck to an inappropriate path for monetary policy for the environment at that time. What if we took some liberty?

This Porridge Is Just Right 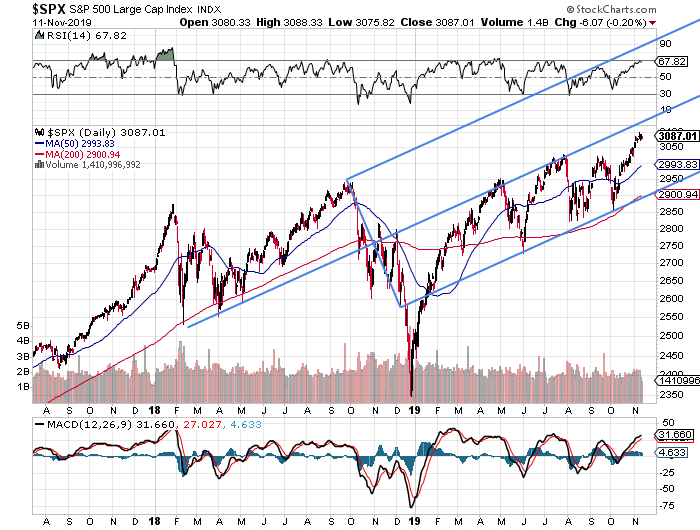 Now, let's be clear. I do not know that omitting the deep selloff of December 2018 is correct for the model while I still include the October and November weakness of that year, as perhaps the true error in policy is confined to just that December meeting and not earlier posturing. However, It sure does make the model work.

I begin this model with the February 2018 selloff, but to be truthful, I could take this all the way back to mid-2015 and it does not change shape, so I think that maybe I did get the trend right. How perfectly does the action fit in between the central and lower trend lines of this Pitchfork?

Takeaways? Two are easy. First, the index could approach 3150 by year's end with a favorable headline or two. Secondly, nothing breaks technically until the index surrenders the 200 day SMA, currently running with that lower trend line at 2900.

Large playing field? That's how folks get shaken out on the wiggle.

-- Pro-democracy protests in Hong Kong are only growing more volatile ahead of a scheduled election. How can one expect a people not to yearn for freedom? Yet, does this impact developing trade talks between the U.S. and China? Both administrations have been understandably quiet. Does this threaten Hong Kong's status as an economic hub for Asia? Both Tiffany & Co. (TIF) and the Walt Disney Company (DIS) made mention of the unrest in their quarterly earnings calls. Financial services companies are most certainly threatened. How about information technology?

-- Speaking of Disney, today (Tuesday) is the day... the launch of Disney+, the company brand-new streaming competitor to Netflix (NFLX) and Apple Inc.'s (AAPL) Apple TV+. Am I still long Disney? Yes, but I have taken off most of my position for now.

--- Can Boeing get the 737 Max back in the air by January? The Federal Aviation Administration (FAA) needs to rescind its grounding order, in place since March. Both Southwest Airlines (LUV) and American Airlines (AAL) have pushed the scheduled resumption of these flights out into this March. Better question: Will you willingly fly in one of these planes? I'll give you my answer... and that is "Not anytime soon."

-- Amazon (AMZN) plans to launch a grocery brand distinct from the Whole Foods and Amazon Go models. While the end target here may just be Walmart's WMT market share, my thinking is that this ends up forcing margins lower at Amazon if ultimately pursued. That completely changes the way this stock has been traditionally valued and for now put a pause to my plan for re-entering the name.

-- How about Alphabet's (GOOGL) Google and "Project Nightingale"? While the endgame might be reducing costs, improving health, and saving lives, I just do not know how ready or comfortable most people might be with the gathering of big data regarding their own detailed personal health information. Go ahead, fight among yourselves. (AAPL, AMZN, DIS and GOOGL are holdings of Jim Cramer's Action Alerts PLUS charitable trust.)